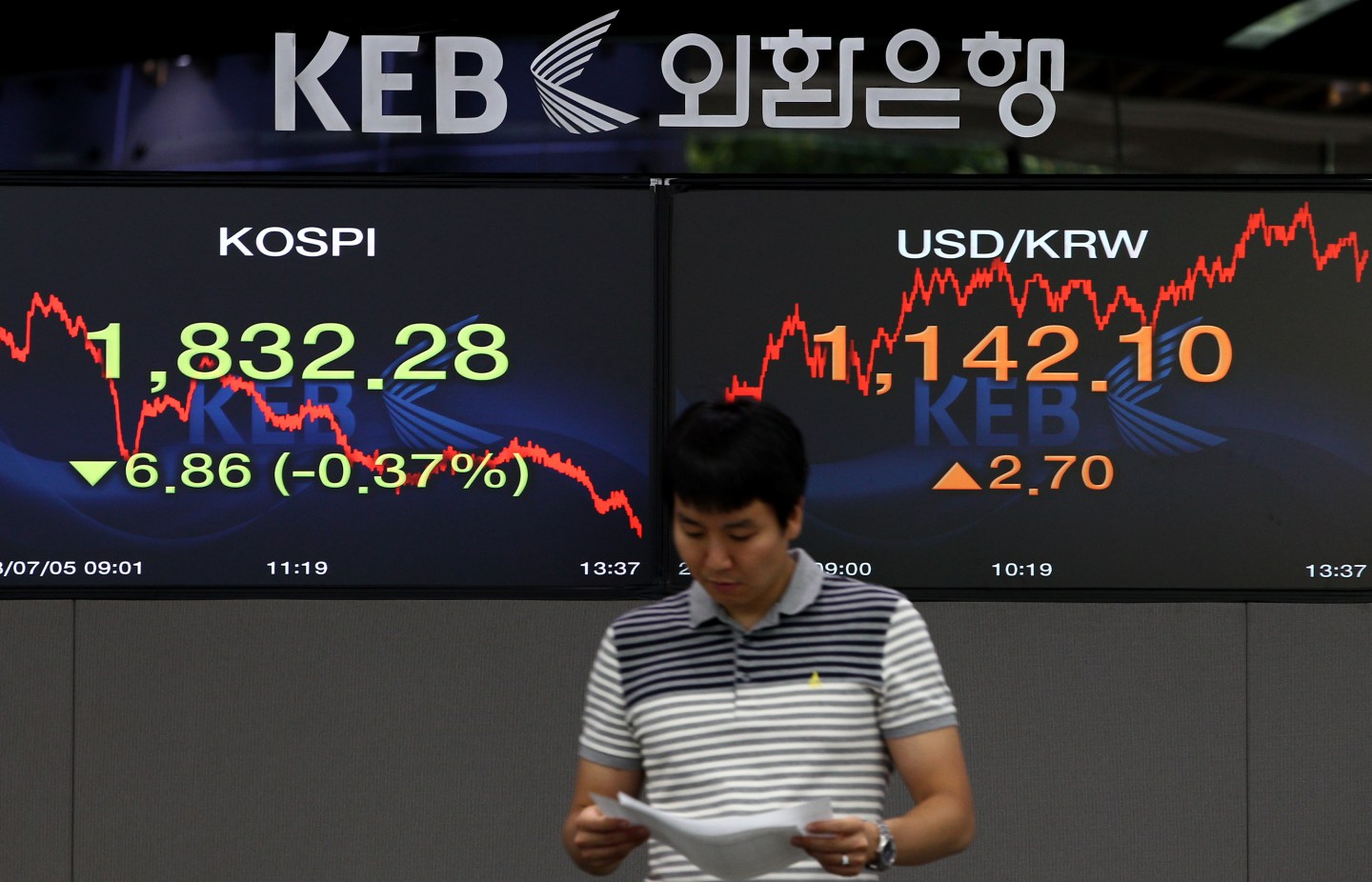 A foreign currency dealer stands in front of monitors displaying the Korea Composite Stock Price Index (KOSPI), left, and the exchange rate between the South Korean won and the U.S. dollar in a dealing room at the Korea Exchange Bank (KEB) headquarters in Seoul, South Korea, on Friday, July 5, 2013. South Korea said an equities selloff by foreign funds in June was the biggest in almost two years. Photographer: SeongJoon Cho/Bloomberg via Getty Images
SeongJoon Cho — Bloomberg via Getty Images

South Korean shares have been emerging Asia’s most becalmed for six years, trading in a narrow range as a sluggish economy and weak exports stifle profits and investment, sending local investors increasingly in search of returns elsewhere.

The lack of long-term movement has led Korean investors to nickname the benchmark Kospi index the “Boxpi,” despite short-term volatility that is the highest in Asia.

“Companies, especially the ones that are leading exporters, need to improve their earnings to escape this box. For this to happen, the global economy has to show clear signs of recovery,” said Yuanta Securities analyst Cho Byung-hyun.

Korean large and mid-cap companies had Asia’s second-lowest return on equity (ROE) last year at 8.5%, according to Thomson Reuters StarMine, ahead only of Japan’s 7.2%.

South Korean shares have long traded at discounts to peers elsewhere due to low dividends and investor concerns about corporate governance and opaque shareholding structures at the conglomerates that dominate Asia’s fourth-largest economy.

According to Yuanta Securities, from 2010 to July 27, the KOSPI showed the least movement among emerging Asian markets, gaining just 43.5% from its lowest to highest. In the same period, Manila’s PSE jumped as much as 190.5% and the Shanghai SE Composite Index 164.9%.

It also moved less than markets in Japan and Hong Kong, although among developed markets Singapore has been even more range-bound.

See also: This Company’s Shares Have Slumped After Target Said It Would Cut Their Ties

The same pattern occurs when the markets are compared by how much they moved within the middle 50% range, which leaves out extreme moves and shows Korean shares gained only 6.5% from the bottom to the top of that range, while stocks in the Philippines rose 62.9% and Thai equities gained 39.4%, according to Yuanta’s data.

The short term is a different story.

The Kospi’s standard deviation – how much the daily move fluctuates from the long-term average – is 1.8 times, according to Thomson Reuters data, the highest in Asia and more volatile even than India. India’s CNX Nifty Options contracts is the world’s most heavily traded, while Kospi 200 options are the world’s fourth most popular, according to the FIA.

Flows of local and foreign investors that cancel each other out help keep the Kospi in a box.

“The Korean economy is quite stable and its currency volatility is much lower than in other emerging countries in Asia, making it less risky for offshore investors,” he said.

“Local investors, however, have expectations that the Kospi will not strengthen beyond the 2,000 level due to sluggish exports, and dump stocks,” he said.

See also: Why Germany Is Going to Start Asking Citizens to Stockpile Food

South Korean stocks have been range-bound for so long that shortly before she was elected president in late 2012, Park Geun-hye pledged to boost the Kospi over the 3,000 mark during her five-year term.

The benchmark, which traded at a 200-day moving average of 1,924.41 at the time of Park’s promise, closed at 2056.24 on Friday, reflecting a global rally in stocks and a meteoric 32% gain this year by index heavyweight Samsung Electronics .

“We’re seeing more investors take their money overseas and although exchange rates are a factor that can affect this, the trend is expected to grow stronger,” said Seo.