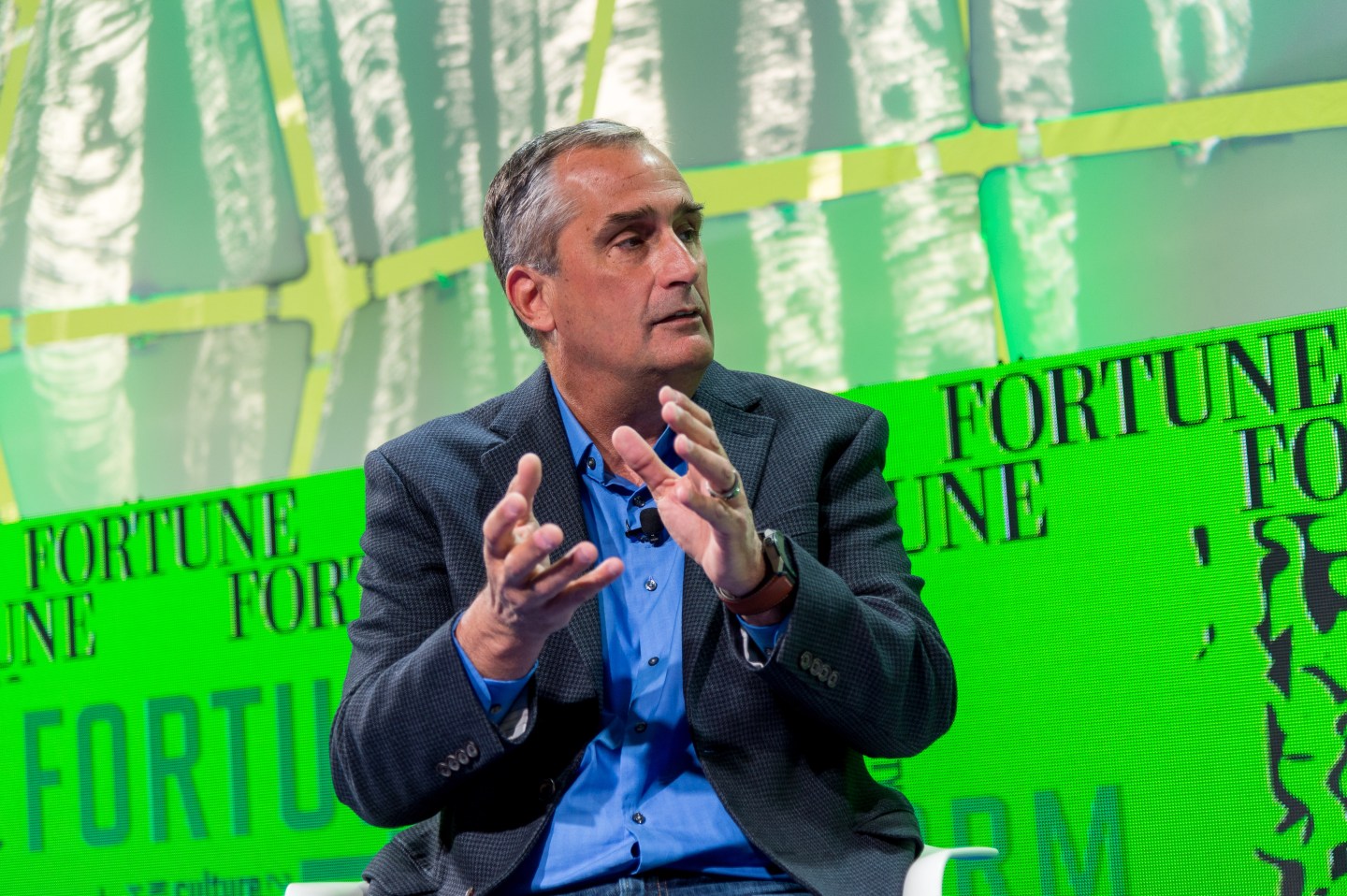 Intel issued a call to arms on Tuesday for software developers to use its technology for practically everything powered by electricity.

From connecting factory equipment to the Internet, to building self-flying drones that can avoid trees and power lines, to interacting in a virtual world, Intel wants developers to know it’s got all bases covered—at least from the chip and hardware level.

Its annual developer conference this week is a showcase for how coders can build products using Intel technology. It’s also a way for Intel to show that it’s branching from its core computer chip business, which continues to sputter because of the declining personal computer market.

Not everything that Intel (INTC) or partner companies showed on the floor of San Francisco’s Moscone convention center will eventually become an actual product to sell. But the ideas do indicate Intel’s attempt to stay competitive in today’s rapidly changing technology market.

Intel CEO Bryan Krzanich described the headset as “completely contained” and with no requirement that it be used in conjunction with a computer or smartphone or with any attached wires.

Krzanich and another Intel executive bragged about the Intel RealSense camera technology that’s embedded in the device for tracking a person’s surroundings in the real world; it can even show a person’s hands in a virtual world. Clearly, Intel wants to sell more of its RealSense technology, and one way it can do so is by convincing virtual reality headset makers to use the RealSense as the underlying hardware.

2. A computer vest for VR

One of the VR projects Intel is working on involves creating a way to use existing VR headsets like the Facebook Oculus Rift without needing to be tethered to a desktop computer. Intel showed off a vest with an Intel processor embedded on its backside that can be used to power VR headsets.

The vest, which contains a battery that can last an hour and a half, was designed to protect the human body from the heat generated by the processor, said Rohit Choraria, an Intel engineering manager. Intel built the vest so it can show partners a basic reference design for creating similar products, but the company has no plans to sell the experimental prototype, Choraria explained.

Wearing the vest, I felt like I was at a dentist appointment waiting to have my X-rays taken. It’s heavy and resembles an oversized bib. But not being tethered to any cable made me feel free, and I could turn and step around without risk of tripping over wires.

Intel also outfitted the vest with vibrating sensors, so when I played a virtual reality video game that put me face to face with a heavy-breathing Tyrannosaurs Rex, the embedded sensors near my chest and belly caused the vest to lightly vibrate, loosely mimicking the visceral feeling of actually being near a giant beast in real life.

3. Motorbikes that can connect to the Internet

A startup called Bolt Motorbikes showed off its battery-powered hybrid motorcycle and bicycle. It uses technology by Intel subsidiary Wind River that connects its hybrid bikes to the Internet so that riders know whether the tires are getting to low or if their bikes need to go to the repair shop, explained Bolt Motorbikes CEO Josh Rasmussen.

One of the things the startup is testing is the ability to use Wind River’s technology to prevent the bikes from driving in places they shouldn’t be, Rasmussen said. For example, if a thief steals a bike and tries to peddle out of the city, the bike would start to slow down and eventually stop. Rasmussen also said that the bike’s web connectivity allows parents to be notified if “junior goes out” for the night without permission.

4. How to connect factory machinery together

Industrial technology company Exor Embedded built a small computer module for connecting factory equipment so all of a facility’s machinery can be viewed as one big system.

The company showed off a model of a car painting factory where conveyor belts are hooked to the Internet while a digital panel helps its operators track the data flowing back and forth from all the machinery.

Simbe Robotics showed off one of the company’s robots that can cruise down store aisles, scan for items like shampoo or soap, and track whether or not inventory needs to be replaced or is mislabeled. The startup recently started to use Intel’s RealSense camera technology that helps its robots orient themselves in a room and prevents them bumping into people, explained chief technology officer Mirza Akbar Shah.

Simbe Robotics, like other robotics startups, once used the sensing and tracking technology of a company called PrimeSense, Shah said. But when Apple bought that company in 2013, many of the startups reliant on PrimeSense’s no longer had the access to the technology. Intel’s RealSense is a possible replacement, Shah said. He declined to comment about the startup’s customers, but Target was reportedly testing the robot at one of its San Francisco stores in April.