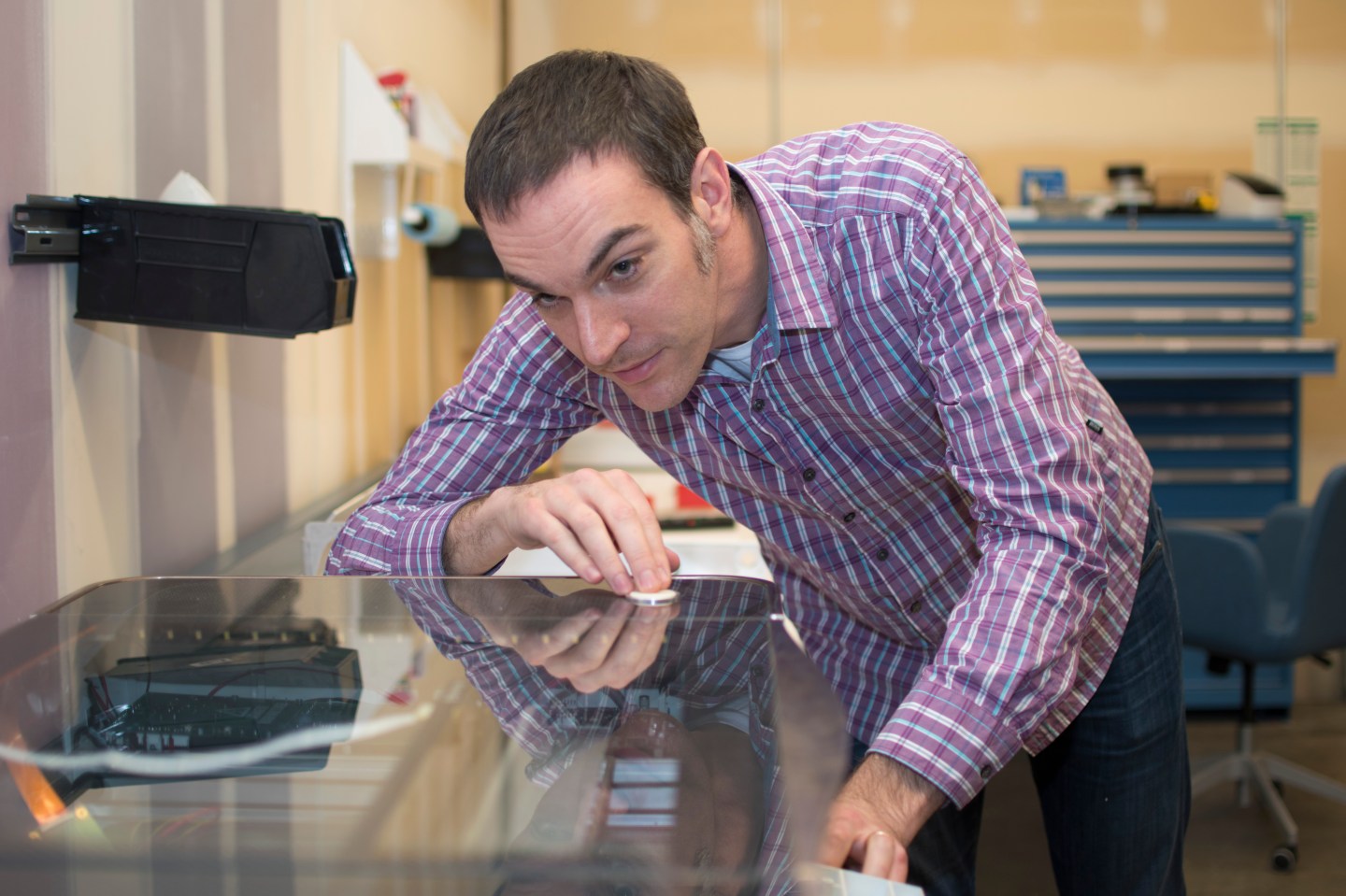 Even while working as a software engineer at Microsoft, Dan Shapiro felt the need to do something with his hands. He had gone to school intending to be a physicist but switched to engineering, he says, because he found that he liked fixing machines better than using them. Yet after going into software, a cerebral profession if ever there was one, his passion for making things—woodworking, building drones—was relegated to the status of a hobby, squarely on the periphery of his life.

That is until the day he found himself installing an $11,000 machine, known as a CNC laser cutter/engraver, in his garage.

He had by this time struck out on his own as an entrepreneur and sold a startup, Sparkbuy, a comparison-shopping site for consumer electronics, to Google a mere six months after its launch. He had also created the best–selling board game in Kickstarter history. It was in his quest to make a special edition of his game, Robot Turtles, that he began investigating advanced manufacturing methods.

He was disappointed by what 3D printing could provide: single-color, “blobby” plastic pieces that took a long time to produce. Then he found the laser cutter. Impressed by its potential, he had it shipped to his Seattle home all the way from China. But it was far from user-friendly.

“It took me weeks to figure out how to use it consistently and reliably,” he says. But eventually he got to the point where, at least some of the time, he could “put a piece of material in, push a button, and something beautiful would come out.”

Related: As Bots Rise Up, Some Level the Playing Field

The idea that resulted—that of “a magic toy box that could print toys”—gave rise to Shapiro’s company, Glowforge, one of the most interesting pick-and-shovel businesses in what is popularly known as the maker movement. That movement, long identified with 3D printers, is entering a new phase, and new companies are rising up to provide craftspeople and innovators with compact versions of industrial tools. In the process, these companies hope to empower small businesses, accelerate the pace of innovation and, ultimately, change the dynamics of global commerce.

Shapiro couches his aims in democratic terms. What he wanted, he says, was “to see if we could take this industrial technology that had been locked up in assembly lines and put it on the desktop in a way that was accessible to just about anybody.”

Tools of the trade

The multibillion-dollar crafts industry, with its hobbyist magazines, specialty stores and celebrities, is hardly new. A 2012 report on the state of the industry by the Craft & Hobby Association, a New Jersey-based trade group, estimated that 62.5 million Americans had taken part in one or more crafting activities in the past year.

There is more than a little overlap between crafting and making. Martha Stewart, the doyenne of crafts, sponsors the annual American Made award to recognize homegrown entrepreneurs. The award is tied to a yearly two-day summit and an online shop that sells handcrafted goods.

“The maker movement is an old thing,” says Danielle Applestone, founder and chief executive of San Francisco-based Other Machine, which sells desktop CNC mills. “People used to make their own clothes and make their own food and fix their own cars. This new thing that we call the maker movement is like, ‘Oh yeah, remember when we didn’t throw everything away? Remember when we didn’t buy everything generic?'”

Calling yourself a “maker,” says Applestone, who has a bachelor’s in chemical engineering from MIT and a doctorate in materials science, is “a way of not feeling weird about making your own stuff.”

What does distinguish the maker movement from old-style crafting, however, besides its iconoclastic air, is the willingness to embrace cutting-edge manufacturing methods alongside, or even in place of, traditional craftsmanship.

The first of these methods was 3D printing, which creates objects by building up material, usually malleable plastic, layer by layer. By contrast, both the Othermill, Applestone’s machine, and Glowforge’s namesake product manufacture through subtraction.

The Glowforge, which for the sake of marketing the company calls a “3D laser printer,” uses a laser the width of a human hair to slice through rigid material and carve designs. The Othermill and its big brother, the Othermill Pro, are designed to etch circuit boards and create high-precision metal parts. They can also carve hard plastic and Teflon. Both are compact enough to sit on a desk or a kitchen table.

Both machines are computer-controlled, and the Glowforge, though it’s compatible with the most common design software, can even make objects based on simple freehand drawings—no digital skills required.

The idea is that the versatility of these machines will free creatives and engineers to experiment and do rapid prototyping with a wide variety of materials. The Glowforge can work with wood, leather, stone, paper, cardboard, acrylic and more. The ability to work with non-ferrous metals is one of the Othermill’s strengths.

It’s a vision sure to resonate not only with artists and hobbyists but with industrial designers and engineers. “If you make engineers dependent upon an external machine shop to make their parts, you have to wait forever to get a part and you won’t be able to innovate as fast,” Applestone says. With your own CNC milling machine, by contrast, “you can do so many iterations in a single day.”

Ultimately, says Shapiro, it’s not about the tool: “It’s about the creative superpowers that we can give people.”

Last fall, Glowforge completed the biggest 30-day crowdfunding campaign in history, receiving $27.9 million in preorders. By then, the company had already raised $9 million from angel investors—including Bre Pettis, the founder of 3D-printing company MakerBot—and the venture-capital firm Foundry Group. Shapiro says he used the money to build prototypes so that he could be sure he had “taken the technical risk out” before taking customers’ money.

But getting the beta units in backers’ hands has been a challenge. Notwithstanding the prototype phase, the Glowforge team—now up to 28 people—has found improvements to be made to the early models. Some beta users have received their machines by now, but others are still waiting. “The beta has caused a lot of hate mail from people who haven’t gotten one yet,” Shapiro admits.

Other Machine, which grew out of a DARPA-funded program, raised about $311,000 on Kickstarter in June 2013 before taking $6 million in angel investment and venture capital. More recently, the company took out a bank loan. “This is not easy, by the way,” says Applestone, laughing the throaty, nerdy, joyous laugh with which she punctuated our conversation.

In September 2014, Other Machine shipped the last of the 205 units that were earmarked for Kickstarter backers, only to discover during the transition to normal sales that the $2,199 Othermill was too expensive for most makers, especially hobbyists. “The Etsy crowd” wasn’t yet ready for milling, Applestone says.

Having started the company with three others and grown it to a staff of 20, Applestone says it has since downsized to 13 people. She regrets not doing more to target educational institutions, which she says have snapped up about half of all the Othermills sold, though she won’t reveal the total.

Targeting the education market has worked well for littleBits, another Foundry portfolio company that sees itself as part of the maker movement. It bills itself as a “platform of easy-to-use electronic building blocks that empower you to invent anything, from your own remote controlled car to a smart home device.” The bits are magnetized, so no soldering or wiring—or, for that matter, programming—is needed to build functioning machines.
Ayah Bdeir, founder of littleBitsPhotograph by Brian W. Ferry

In May, the company launched the School Chapters program, designed to build a global network of educators who use littleBits in their curriculum. About 45 schools have signed up as official chapters so far, though already more than 3,000 schools worldwide use littleBits as a teaching tool. The platform has been used not only to increase kids’ technological literacy and introduce them to engineering concepts but to teach Greek mythology and even poetry, says Ayah Bdeir, Littlebits’ founder and CEO. She is acutely aware that her products are training the next generation of makers—customers one day, perhaps, of Other Machine and Glowforge.

The future of the movement, Bdeir says, depends on “speak[ing] outside the choir, so you’re not just talking to people who have already been convinced of the virtues of making and experimenting.”

Just as the iPhone App Store launched a thousand startups, so the Glowforge could launch a thousand Etsy businesses. Shapiro compares the Glowforge’s money-making potential to that of the sewing machine, historically a source of income for many households. “The first generation of the maker movement was a lot of ‘Gee whiz, look what you can do,'” he says. “Now we’re talking about machines that can earn their keep.”

The proposition involves something of a bait-and-switch. Were the Glowforge to become as ubiquitous as ordinary home printers, prices for simple housewares and many other basic goods would most likely drop to zero, since just about anyone could make their own at any time. Why pay a seller’s markup?

Confronted with this logic, Shapiro admits that cheap goods may become fungible commodities, and will be priced accordingly, yet he insists that true artistry will shine forth all the more. “Over time,” he says, “the things that will have value and the entrepreneurs who will last are the people who transform that basic commodity, who use the Glowforge as a means to create something utterly unique.”

But it remains to be seen whether desktop manufacturing will truly go mainstream. It would take massive scale to change the global manufacturing paradigm, in which currently the cheapest way to produce many basic goods is to make them in distant factories and transport them across the world on container ships. Applestone, for her part, seems to have drawn back from the consumer market with the release last month of the Othermill Pro, a faster, pricier model that allows users to make tinier, more precise cuts.

Even so, she remains steadfast in the belief that the maker movement must become a mass movement. She envisions “CNC everything“—computer-controlled power tools for consumers that will smash the barrier to entry for creating physical products.

“The role of machines like ours, and Glowforge,” Applestone says, “is that they need to be everywhere. You need the people that have the ideas to have the tools. Otherwise it’s too slow.”