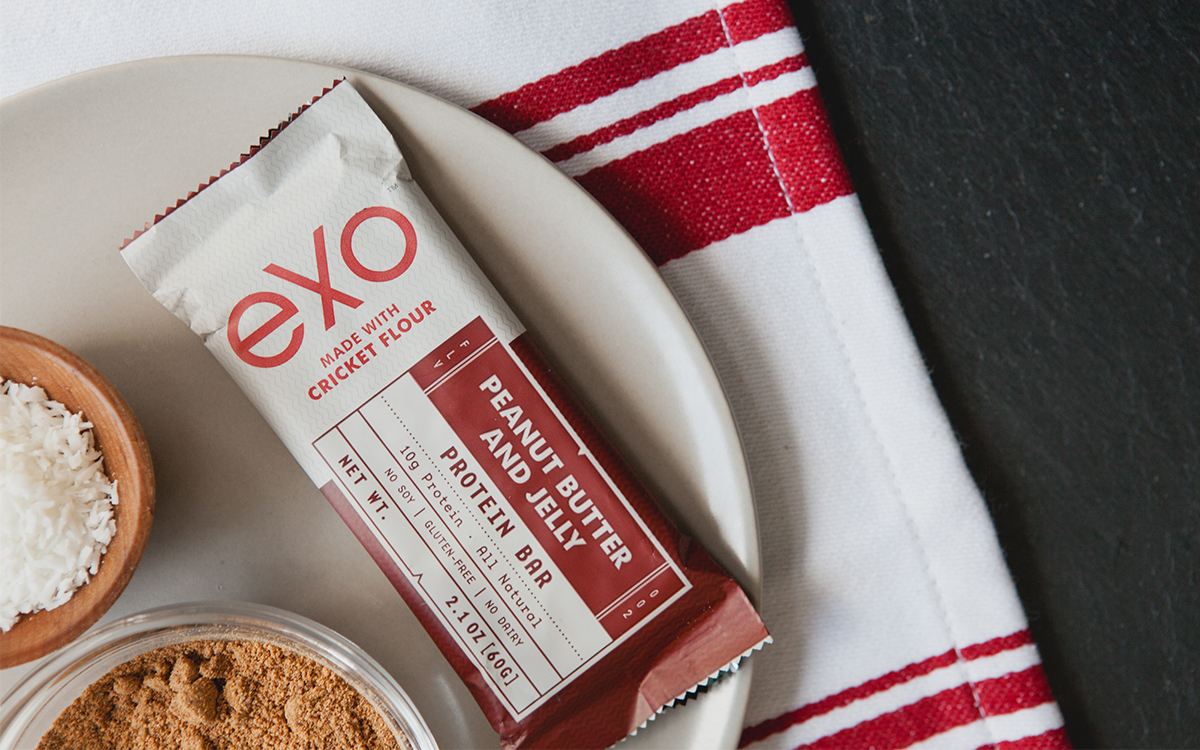 It’s not often that a United Nations report provides the spark for a hot startup. But when Greg Sewitz, a senior at Brown University, read the UN Food and Agriculture Organization’s 200-page white paper trumpeting the benefits of edible insects in the fall of 2013, he was stunned by the realization that the U.S. is one of the only countries with “no culture of eating insects.” He reached out to his friend and former roommate at Brown, Gabi Lewis, a powerlifter who made his own protein bars, and they agreed to test the waters.

After graduating, they launched a Kickstarter campaign for cricket protein bars using a basic recipe Lewis had whipped up in his dorm room. They blew past their funding goal of $20,000 in 72 hours and went on to raise $55,000. “That was the validation we were looking for,” says Sewitz. “We had reached what was obviously still an early-adopter community, but they were very passionate about it. We thought there was something there to build a company on.”

That company, Exo, which counts rapper Nas and lifestyle guru Tim Ferriss among its investors, is at the forefront of a growing movement the end goal of which is nothing less than a revolution in Western eating habits. The farmers, chefs and startups involved in the burgeoning insect-protein industry want bugs to become as common as beef—and maybe even replace it.

In the last several months, insect protein has made major inroads with investors and consumers. Earlier this month, following a $1.6 million seed round in the fall of 2014, Exo raised $4 million in Series A financing and moved into a new office in Brooklyn, part of a 47,000-square-foot coworking space that New York magazine touted as the borough’s “coolest new office space.” And while Exo doesn’t release sales figures, another cricket-protein startup, Chapul, more than quadrupled its annual revenue from 2014 to 2015, from about $70,000 to just over $300,000, and is on track to bring in more than $1 million this year thanks to a distribution deal with UNFI, a national distributor of health-food products, according to Chapul’s founder, Pat Crowley. Chapul’s protein bars are now stocked by Sprouts, Wegmans, Publix and about a dozen smaller grocery chains. As for public awareness, nowadays “it is rare that we find somebody who hasn’t heard of the concept,” Crowley says.

All of which goes to show that the edible-insect trend has legs. Says Lewis, “We wouldn’t be doing what we’re doing if we thought it was going to stay on the margins for the next 20 years.”

Several complementary forces are driving the trend. One is concern for the environment and an interest in sustainable living. Another is the desire for clean nutrition among CrossFit aficionados and their peers. Yet another is a clutch of food fads: the paleo diet and the gluten-free craze especially. By all these lights, crickets look like a superfood. They are about 60% protein, are packed with vitamin B12, have more calcium than milk and more iron than spinach, and provide all the essential amino acids. They produce far fewer greenhouse gases than livestock and require far less water: it takes 100 gallons of water to produce 72 grams of crickets as opposed to only 6 grams of beef, making them potentially a more efficient food source. Both Exo’s and Chapul’s bars are gluten-free, dairy-free and paleo-friendly.

Of course, none of that would matter if the “ick” factor couldn’t be overcome. Lewis, Crowley and Goldin each independently draw a comparison to the California roll, in which raw fish was reimagined for the American palate. According to Exo’s head of research and development, Kyle Connaughton, the key was to make something that tasted good enough that it would keep consumers coming back even after the novelty had worn off.

“Crickets are the gateway bug,” admits Jarrod Goldin, who, along with his two brothers, runs Entomo Farms in Ontario, which supplies Exo and Chapul with cricket powder for their products. It is this powder, the result of roasting or otherwise drying the crickets and then grinding them up, that has changed the game for entomophagy—the technical term for insect-eating. Customers can enjoy the benefits of eating insects without seeing the critters themselves.

Related: Your Fruit at Whole Foods Is Going to Get a Little Uglier

Each of Exo’s bars, which come in flavors such as apple cinnamon and banana bread, contains 40 crickets. Exo differs from Salt Lake City-based Chapul in doing most of its business—more than 80%—online, primarily through subscriptions that allow customers to receive boxes of bars on a recurring basis. “At this point the brand is definitely targeted toward hardcore users and early adopters,” says Sewitz. “We went after CrossFit really hard, paleo-diet people really hard.” He and Lewis figure these types will be less squeamish than the general population but that their habits will influence others over time.

Just how many Americans can be converted to eating insects? Proponents argue that the Western antipathy for insects is nothing more than cultural prejudice, and that cultural barriers can be knocked down in time. They point to shrimp and lobster, along with sushi, as examples of foodstuffs that were once shunned by most but are now considered delicacies.

Curious to have an outside expert’s opinion, I asked Michael Pollan, author of The Omnivore’s Dilemma and host of Cooked, a new Netflix documentary series based on his book of the same name, whether insects would ever catch on in the West. The night before, I had seen him speak at a New York Times event, where he was adamant that Americans, as he put it, “eat altogether too much meat”—an average of nine ounces per person per day. But as for whether insects are the right alternative, Pollan isn’t so sure. “Insects might be the most sustainable animal protein, but food culture is powerful and there’s a strong taboo that would have to be overcome,” he told me. “It happened with raw fish, but this is a heavier lift.”

Better, he suggests, would be to “raise lots of bugs to feed the animals we already want to eat,” namely chicken and fish. If farmed fish could be fed bugs, they wouldn’t need to eat other, wild fish. “This would take tremendous pressure off the fisheries and allow us to feed the corn and soy we’re now feeding chickens and pigs to people,” Pollan says.

Sewitz counters that insects are not yet cheap enough to serve as animal feed for industrial farms. But the insect farms that do exist are growing. Take Entomo Farms. The brothers Goldin have three 20,000-square-foot barns in which they are raising an estimated total of 90 million crickets. They are preparing to raise a Series A round. “We like to look at this as a disruptive business technology in the same way that solar panels are disruptive or Uber is disruptive for the taxi industry or Airbnb is disruptive for the hotel industry,” says Jarrod.

Pollan, who is gently satirical regarding startups’ attempts to “disrupt the food industry,” nevertheless acknowledges that “young entrepreneurs and young food scientists and young inventors have an opportunity that really didn’t exist ten years ago.” Chapul just received a $100,000 grant from the state of Utah to develop a new process for creating cricket powder that would make the powder water soluble, while Entomo Farms, together with Loyalist College in Belleville, Ontario, is preparing to embark on a government-funded study of the powder’s ability to stay fresh without refrigeration.

Related: How Frito-Lay Is Surviving the Natural Food Trend

Meanwhile, Exo plans to use its $4 million to make key hires, expand further into brick-and-mortar retail and launch new products. (Exo’s bars are already stocked by Wegmans.) “We really want to bring in some experienced packaged-food people and R&D help to keep pushing the boundaries of what we can use the cricket for,” Sewitz says.

Sewitz, Lewis, and others in the space are confident that the demand for insect protein will continue to grow. They see a future in protein-enriched condiments, gluten-free cricket pasta, healthier baked goods. Chapul has already released a cricket baking flour that can be used as a one-to-one substitute for all-purpose flour in any recipe. Exo has developed other products in addition to bars but won’t say what they are yet.

One day, the average American diner may even be willing to stomach insects in all their multi-legged, chitinous glory. “When we started, we thought the protein bar—our California roll—was kind of out there,” says Lewis. “We’d have told you that we can’t see anybody eating a plateful of grilled grasshoppers in mainstream restaurants any time in the next 50 years. I wouldn’t rule that out anymore.”