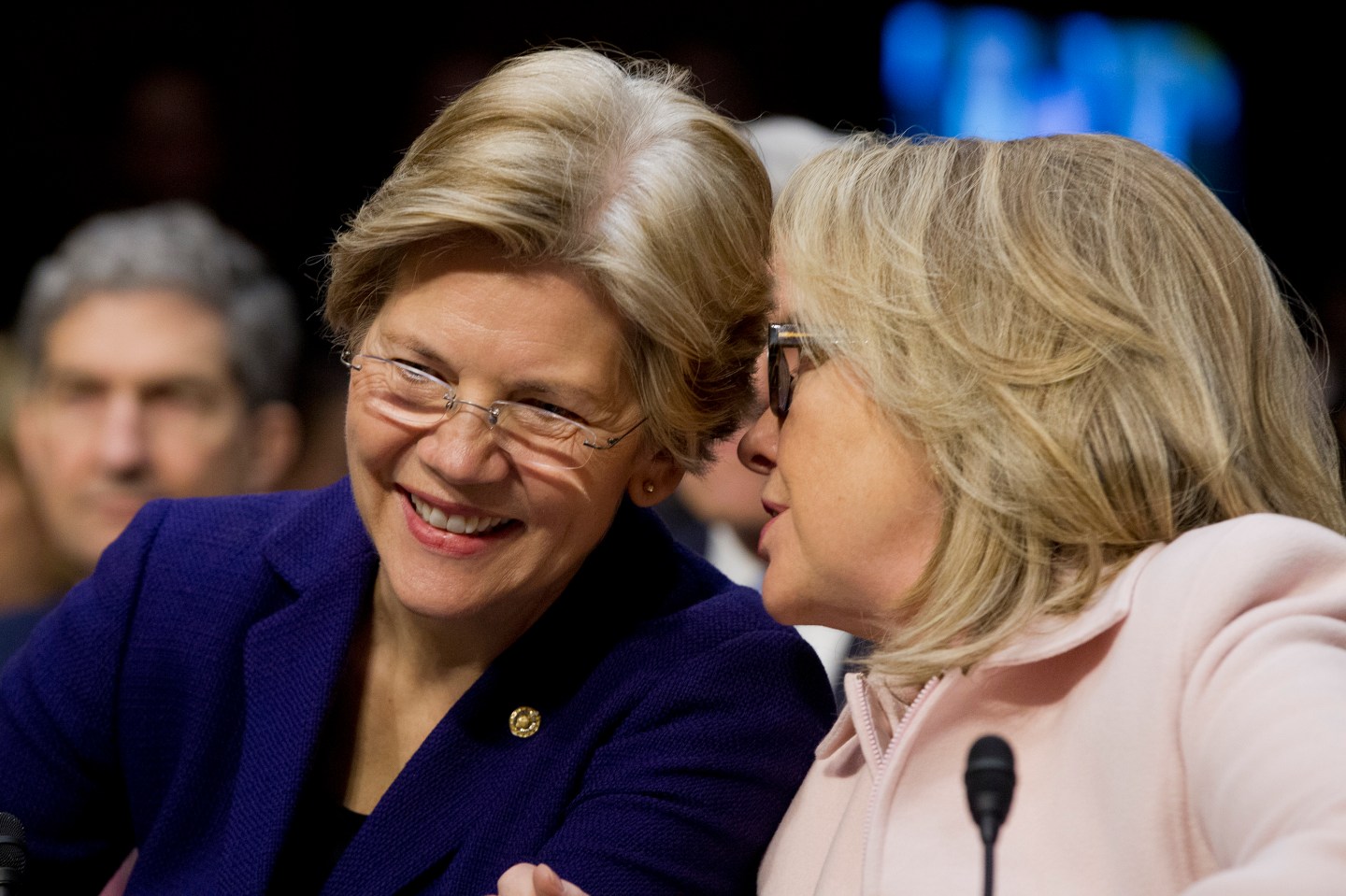 When the rumors began to circulate over Hillary Clinton’s vice presidential pick, Elizabeth Warren, the popular, progressive senator from Massachusetts, was labeled a highly unlikely choice. Even the possibility that they would meet to discuss the idea was dismissed, with some pundits sniffing that, well, two strong women simply could not work together.

They met in mid-June and will hit campaign trail together in Cincinnati next week. No official partnership was announced after their meeting. But the attention given to their meeting spotlighted the fact that female power duos are rare in politics and in business. For women leaders, the typical perception is that they have reached the top alone.

“It’s more likely when you ask about partnerships, people will say Ben and Jerry,” she said, of audiences who come to hear her and her collaborator Maggie Ellis Chotas talk about their book.

When Polk and Chotas ask people to name female partnerships, many draw a blank. Instead, they throw out names like Sheryl Sandberg, chief operating officer at Facebook (FB), or Marissa Mayer, CEO of Yahoo (YHOO). Both tend to be viewed as women who have succeeded solo in a nearly all-male environment.

In fact, there are few such high-status pairings in politics or the executive suite, though they are far from unheard of. Xerox (XRX) CEO Ursula Burns and Anne Mulcahy (her predecessor) were the poster female duo in the 2000s back when the two women worked together as president and CEO, respectively. The two later vied to share power, when Burns prepared to succeed Mulcahy in the top job.

They had their tensions, to be sure, but Burns and Mulcahy worked through them. But they were hailed as exceptions. Even though men compete in the C-suite and joust for the next rung on the corporate ladder every day, there has long been an undercurrent of skepticism that two women could do so as well. That’s partly a reflection of how closely women are scrutinized in politics and in the workplace.

Women collaborators are scarce enough that it was a challenge to find subjects for their book, said Polk and Chotas, who are long-standing business partners. The pair spent months trying to track down examples of women in those roles. They built up a list and interviewed 125 women who were part of business duos, mostly entrepreneurs and small business owners.

“Women didn’t always want to be in the limelight,” Polk recalled. Referring to such female duos, she said, “they were rarely asked about their partnerships and were moving ahead to get things done that needed to be done.”

There were few female duos in the corner office because there were—and are—so few women there to begin with, said Polk. In addition to lagging behind in the boardroom, where fewer than one-fifth of directors are women, the female presence among chief executive officers is scant. Less than 5% of CEOs at the nation’s top corporations are women, according to several studies.

Some like Meg Whitman, at Hewlett-Packard Enterprise (HPE), and Mary Barra, at General Motors (GM), are top business leaders with major public profiles. Whitman ran for but lost California’s governorship before taking over at HP, and Barra was the face of General Motors when it suffered major blowback from widespread ignition malfunctions. But both executives are typically seen accompanied by gaggles of men, not as part of a team of female leaders.

As far as visible female duos are concerned, politics is similar to the executive suite. There are – and have been – women governors, such as Bev Perdue in North Carolina, Jan Brewer in Arizona, and currently Nikki Haley in South Carolina. They stand out as the sole, or nearly the sole, woman in every photo. Occasionally, women have run together in a pair to become governor and lieutenant governor. But each of the five duos who have tried it over the past two decades have failed to be elected, according to the Center for American Women and Politics at Rutgers University.

Women have not fared too well abroad either, with Queen Elizabeth and Margaret Thatcher comprising perhaps the most highly visible female partners. However, they did not run for office together – the queen inherited her title. She did formally choose Thatcher as prime minister, but she was bound to follow rules requiring her to select the person who had the confidence of the House of Commons, the lower house of Parliament.

It was not an obvious match, but they worked together – inspiring a near industry of commentary, a book, at least one film, and reams of speculation about their class-driven differences. But Thatcher and Queen Elizabeth were for many years among the most powerful people in the world.

Whether Clinton and Warren can copy that model is yet to be seen. Clinton served a stint in the U.S. Senate, where the 20 female senators have developed a close camaraderie, greatly fostered by Maryland’s long-serving Senator Barbara Mikulski. Although there are few female senators overall, four states have elected women at the same time to the U.S. Senate, notably Barbara Boxer and Dianne Feinstein in California. New Hampshire, Maine, and Washington also have had all-female representation in the Senate.

Warren, an attorney like Clinton and a former Harvard Law professor, would bring powerful credentials to any political ticket. She has carved out a national reputation for backing financial reform, and she could be instrumental in persuading progressives who’ve supported Bernie Sanders to join Clinton’s side.

Even so, it’s often an uphill climb for most women working as a team. Polk and Chotas say that women can suffer from the perception that if they team up with another woman, “they are not willing or able to do the work alone.”

“There is so much scrutiny for strong women leaders who are solo,” said Chotas, “and, gosh, there’s even more scrutiny for two women who collaborate.”

But she highly recommends such collaborations, noting that two women tackling an issue can diffuse the spotlight and “can provide enough cover for each partner to do what she does best.”