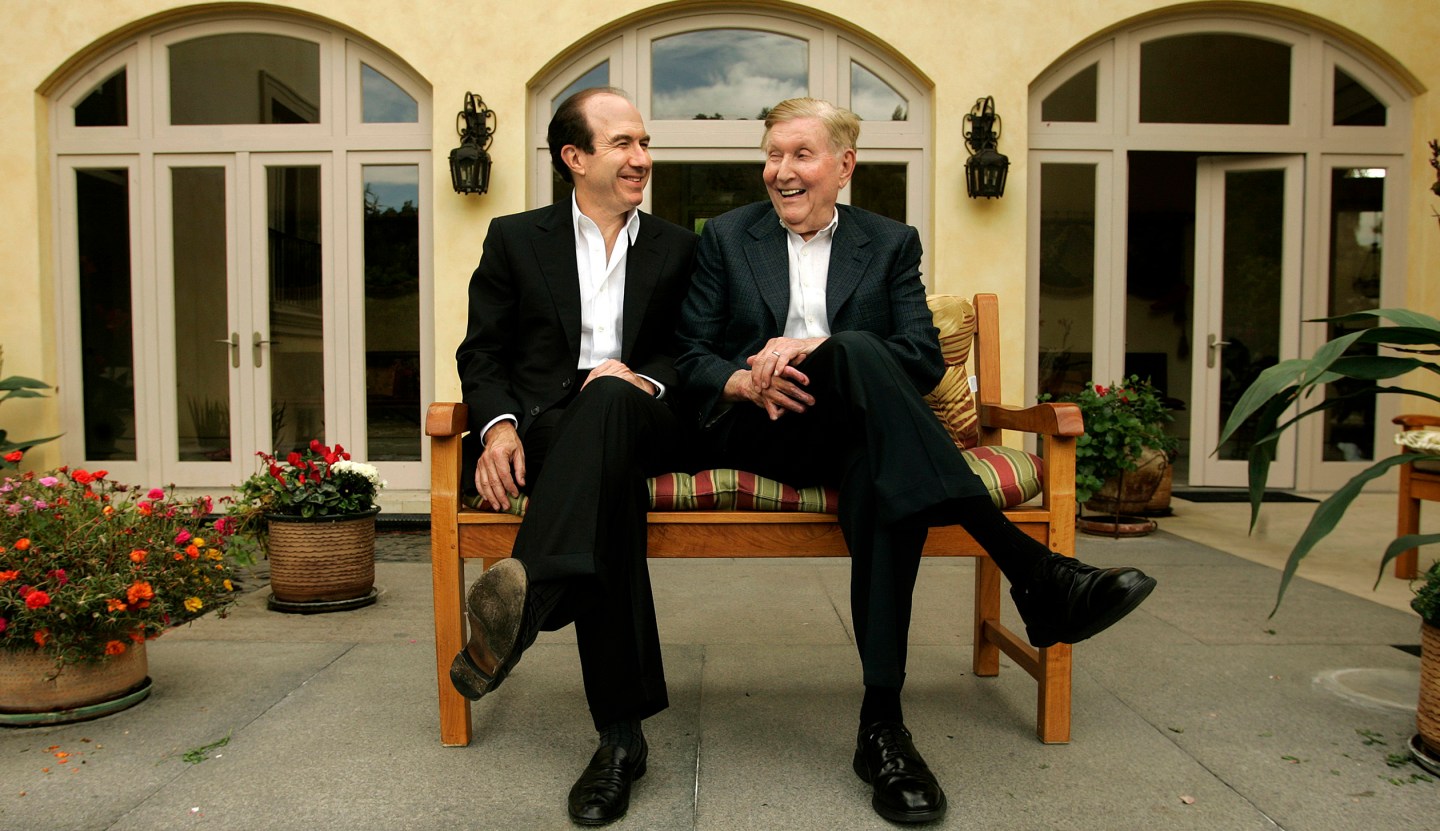 Viacom chairman Philippe Dauman is fighting his mentor and boss in court for control of the media giant, but on Thursday, he said he is still moving forward with plans to sell off a major chunk of Viacom’s 104-year-old movie studio

At a conference hosted by Gabelli & Company, a New York brokerage firm, Dauman said that Viacom is currently involved in “detailed discussions” with a group of potential partners to sell a roughly 49% stake in film studio Paramount Pictures.

Dauman described a potential deal as a “tax-efficient transaction” that he said would “essentially unlock value of approximately $10 or more per Viacom share” if it moves forward successfully. He also hinted at even more potential dealmaking down the road, adding that any party that buys a stake in Paramount would “likely” be a potential strategic partner for the whole of Viacom in the future.

An epic power struggle atop Viacom is playing out publicly amid court battles over the mental acuity of Sumner Redstone, the 93-year-old mogul whose National Amusements holding company controls roughly 80% of voting shares in both Viacom and CBS (CBS). Dauman is currently fighting a move by Redstone to remove him and fellow Viacom board member George Abrams from the trust that will control Viacom and CBS after Redstone’s death. Redstone’s National Amusements recently changed Viacom’s bylaws to require the unanimous approval of the company’s board to approve any deal involving Paramount, citing a need to protect “long-term interests of shareholders.”

At a Q&A session at the conference, Dauman joked about the legal drama that has been chronicled in the business press, including Fortune. “It’s a lot more fun being involved in creating the content then in being the content,” Dauman said, to laughs.

Dauman confirmed on Thursday that the company is moving forward with deal talks after whittling down the list of prospective buyers from more than 40 strategic partners to a smaller group of “major, global” potential buyers, though he admitted that Viacom’s initial goal of selling a stake in Paramount by the end of June “is going to slip somewhat” on account of the ongoing legal obstacles.

“We are going to proceed deliberately, thoughtfully, and thoroughly with our board as we perfect and move forward with a transaction,” Dauman said.

The delayed stake sale is just one of the side-effects of the ongoing saga involving Sumner Redstone’s media empire and the dissolution of the billionaire’s relationship with Dauman, who, on Thursday, described the mogul as “a great friend for over 30 years.” And, it comes at a time when Dauman has faced criticism of his leadership as Viacom’s shares are down about 35% over the past 12 months.

“Paramount’s had a tough year. It’s no secret,” Dauman admitted at the conference on Thursday. Of the six major U.S. film studios, Paramount is currently fifth in terms of overall box-office gross in 2016 at a little more than $350 million domestically, which is not even one-quarter of the amount that market leader Walt Disney’s (DIS) films have made, according to Box Office Mojo. Last year, Paramount finished sixth in terms of overall domestic box office, just ahead of mid-major studio Lionsgate (LGF). Paramount’s recent slate of films has disappointed, with Zoolander 2, Whiskey Tango Foxtrot, and Teenage Mutant Ninja Turtles: Out of the Shadows failing to make much of an impression at the box office. Star Trek Beyond is coming out soon.

Dauman promised a “vibrant pipeline” of new films to boost Paramount’s box-office results going forward, noting that the studio will continue to set a target of 15 new movie releases each year. The Viacom chairman also stressed the importance of targeting emerging foreign movie markets as a growing source of revenue. Dauman said Paramount plans to release a new film from the profitable Transformers franchise, which typically performs well overseas, every year for the next several years.

With regard to Dauman’s intent to tap foreign markets, potential buyers for the Paramount stake have included Chinese companies like Dalian Wanda, which previously approached Paramount and has been building a global movie and entertainment presence with assets including theaters and studios. China’s movie industry is rapidly expanding and the country is set to overtake the U.S. as the world’s largest movie market sometime next year.