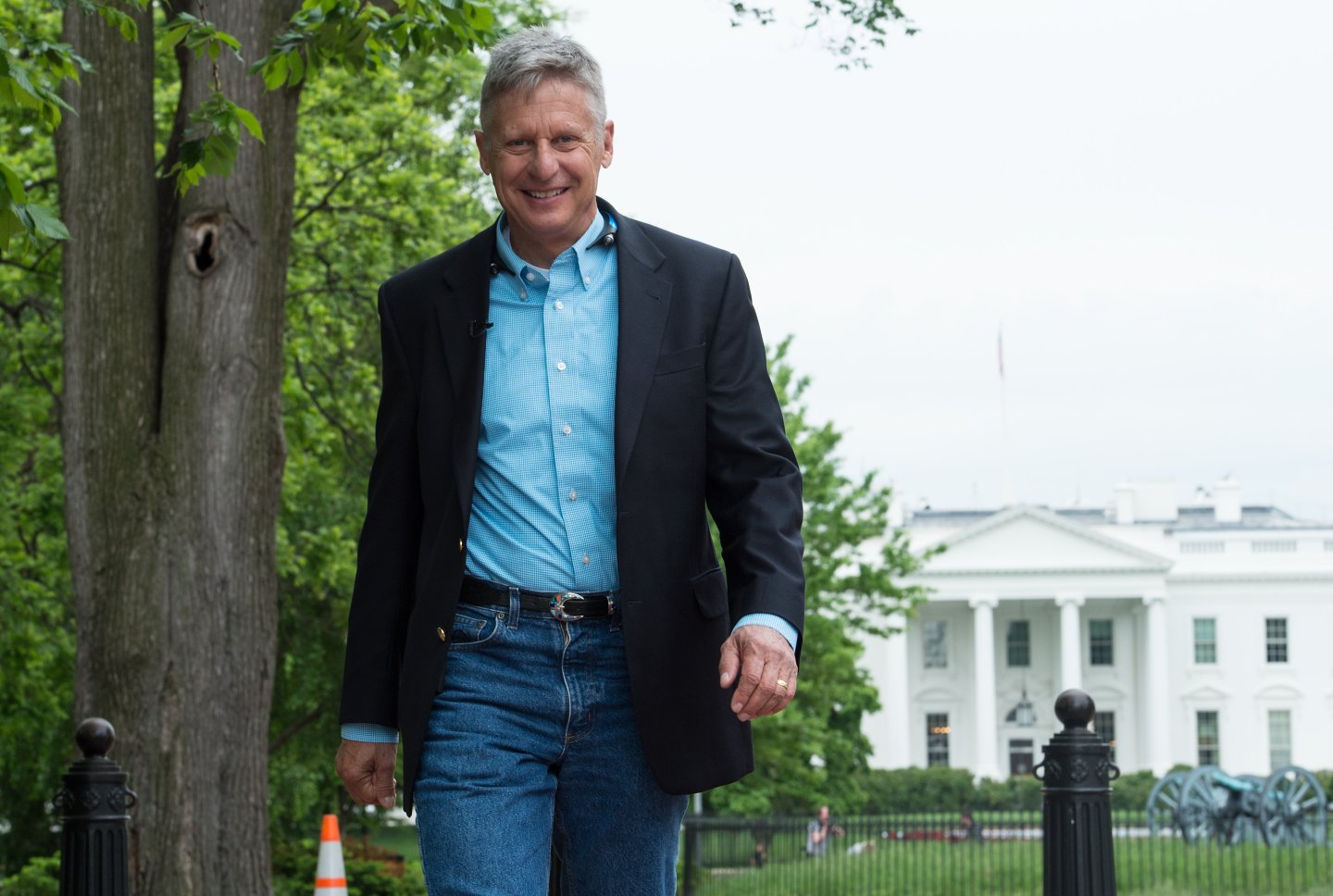 US Libertarian Party presidential candidate Gary Johnson walks in Lafayette Park across from the White House during an interview with AFP in Washington, DC, on May 9, 2016. Former New Mexico Gov. Gary Johnson is running for president as a Libertarian, just as he did 2012 when he managed to get 1.2 million votes. Regardless of his chances of a win, Johnson is reaching out to undecided Republican voters who are looking for a third-party option and are unconvinced that Donald Trump is the answer. / AFP / Nicholas KAMM (Photo credit should read NICHOLAS KAMM/AFP/Getty Images)
Photo by Nicholas Kamm—AFP via Getty Images

Johnson’s win was determined at the Libertarian party’s national convention over Memorial Day weekend, ABC reports. He went up against five other candidates and won 55.8% of the vote. His running mate will likely be former Massachusetts governor Bill Weld, though the party seems to be wary of him considering he joined just under two weeks ago and previously endorsed John Kasich for president.

With people flocking to the “Never Trump” and “Never Hillary” camps, Johnson could be a palatable third option come Election Day. Fortune reporter Geoff Colvin has described a Johnson-Weld ticket as “Libertarian Lite” as opposed to “Libertarian Classic,” appealing to those who are fiscally conservative and socially liberal.

Johnson believes in reducing the role of government and allowing the people to make decisions for themselves when it comes to social issues, including marijuana and abortion. His website states that he supports replacing all income and payroll taxes with one consumption tax, and says that his tax reform would render the IRS an unnecessary institution. He says that the federal deficit is the “single greatest threat to our national security,” and boasts having balanced New Mexico’s budget and cultivating an economic environment that allowed growing companies to create jobs.

The third-party candidate is also a successful businessman. Before he became New Mexico’s governor, where he served from 1995 to 2003, he started his own company. Big J. Enterprises was founded in 1976, when Johnson was just 23 years old. It began as a one-person venture, and grew to become one of the largest construction companies in New Mexico. The company, which he sold in 1999, supposedly made him a millionaire.

This won’t be Johnson’s first presidential run. He also ran as a Libertarian in 2012. Though he received just 1% of the vote during that election cycle, and it’s very unlikely that he’ll be voted into office this time around, he could prove to be a disrupting force. ABC notes that a recent Fox News poll showed that he received 10% of the vote in a hypothetical match up against Donald Trump and Hillary Clinton.