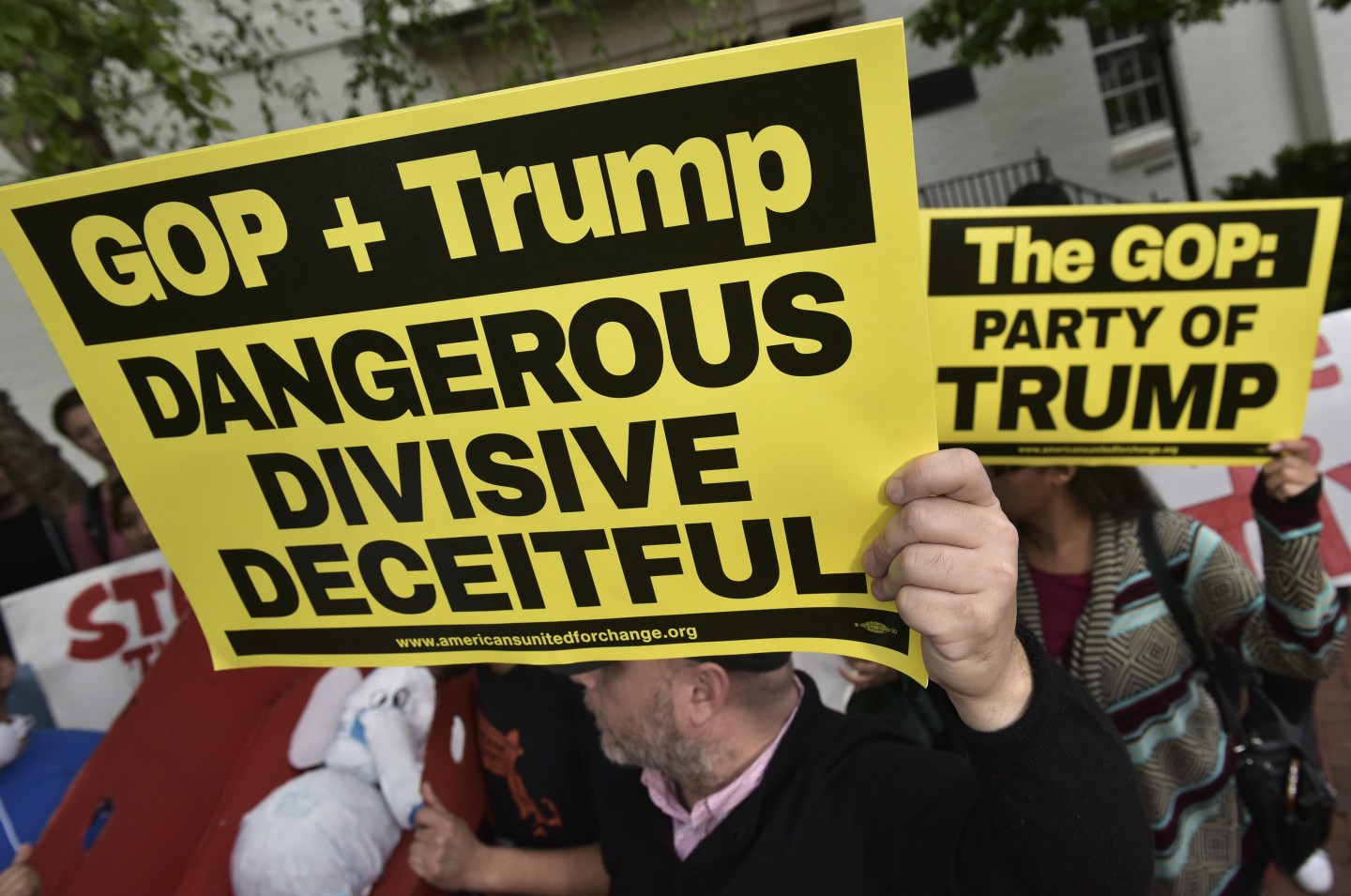 Demonstrators hold placards as they protest outside of the Republican National Committee where presidential Donald Trump was meeting party leaders on May 12, 2016 on Capitol Hill in Washington, DC. / AFP / Mandel NGAN (Photo credit should read MANDEL NGAN/AFP/Getty Images)
Photo by Mandel Ngan—AFP via Getty Images

A group of anti-Trump Republicans are banding together in a last-ditch effort to keep the businessman from getting in line for the White House.

According to a report by the Washington Post, the group consists of former Republican nominee Mitt Romney, commentators William Kristol and Erick Erickson, and strategists Mike Murphy, Stuart Stevens, and Rick Wilson. They want to block Donald Trump from being elected come November by introducing a third-party candidate to run as an Independent. Their current top prospects are Nebraska Senator Ben Sasse and Ohio Governor John Kasich, who recently suspended his presidential campaign.

Others that had reportedly been considered included former senator Tom Coburn, retired Marine Corps General James N. Mattis, retired Army General Stanley A. McChrystal, former Secretary of State Condoleezza Rice, and billionaire businessman Mark Cuban. Cuban, a reality show star like Trump, said he doesn’t “see it happening.” He has also voiced his support for the Republican frontrunner, though he likened him to “the guy at the bar who will say anything to get laid” and said that his campaign has been about nothing.

This is most likely a hopeless attempt. Patrick J. Buchanan, a conservative who unsuccessfully ran as a Reform Party candidate in 2000, said that these anti-Trump Republicans probably won’t be able to find someone willing to put themselves in such a difficult position. “The career of the individual would come to an end, and he would have a difficult spot in history for being responsible for putting Hillary Clinton in the White House,” he told the Post.

Though members of this anti-Trump group admitted that their effort is likely useless, they’re hoping that they could launch a credible bid in the next couple weeks. The effort has supposedly been going on for some time now, but was kicked into full gear when Kasich and Ted Cruz dropped out of the race, effectively handing the Republican nomination over to Trump.