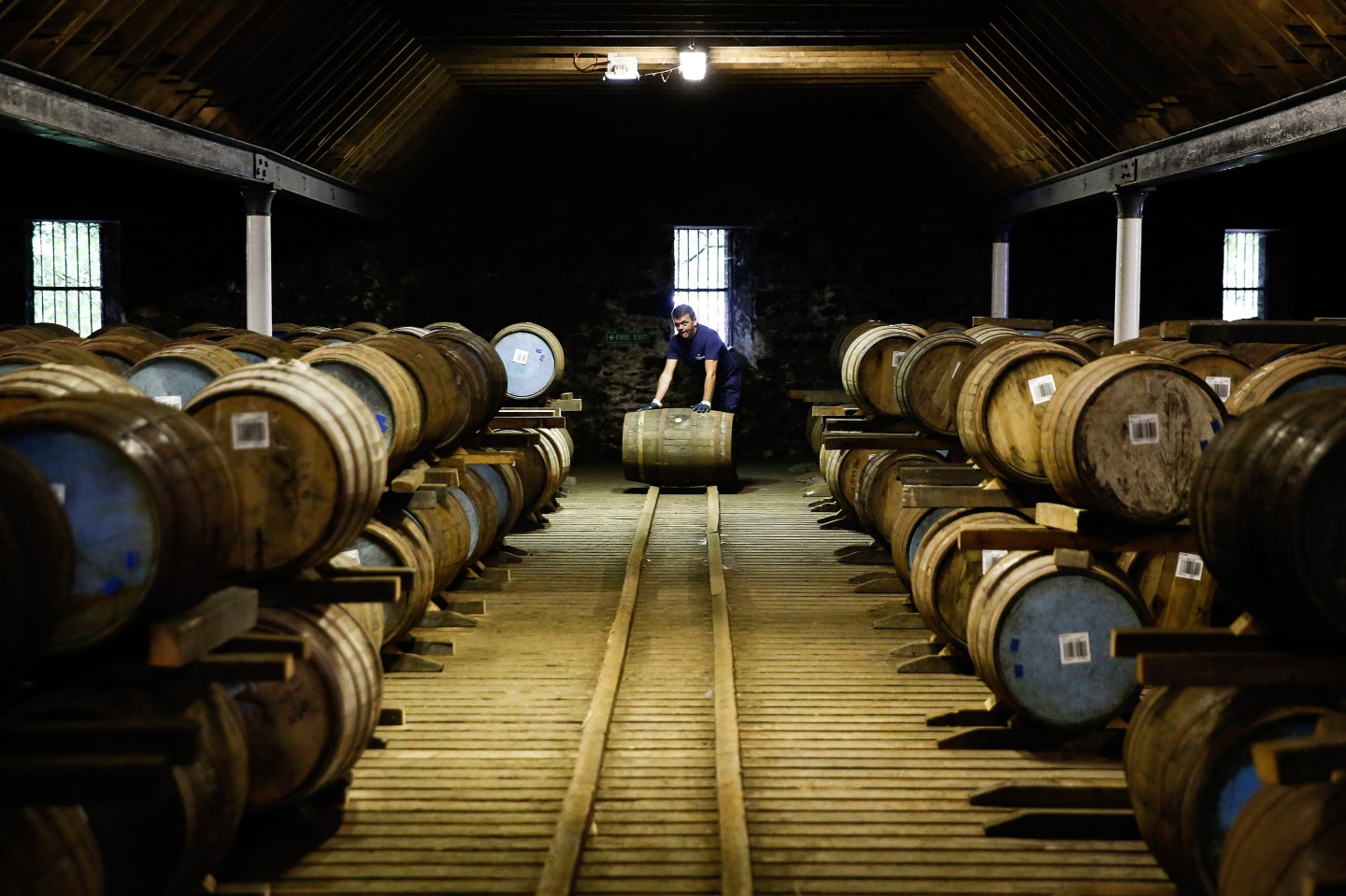 An employee moves a wooden cask of Chivas Regal blended Scotch whisky, produced by Pernod Ricard SA, at the company's Strathisla distillery in Keith, U.K., on Tuesday, Aug. 5, 2014. Scottish nationalist leader Alex Salmond and former Chancellor of the Exchequer Alistair Darling, who leads the 'No' campaign, clashed over the risks and merits of independence six weeks before the Sept. 18 referendum that could bring an end to the U.K. Photographer: Simon Dawson/Bloomberg via Getty Images
Photograph by Simon Dawson — Bloomberg via Getty Images

The Scotch whisky industry reported a 2.8% drop in global volume last year, as demand slipped in Brazil, Russia and other nations that saw their economies dented by weak oil prices. But growth continued in North America and the decline for 2015 was less severe than the prior two years.

In 2013 and 2014, roughly 7% declines were reported by the industry group Scotch Whisky Association, which closely monitors the sector. And while Scotch’s weakness of late has improved, it is notably still performing worse than the overall global spirits category. Research firm Euromonitor recently issued its global report, calling out solid demand for English gin, Irish and Japanese whiskey, tequila and bourbon.

The Scotch industry had been on a strong run in the decade leading up to 2013, as global drinkers were lured by a shift toward beverages that are marketed as “more premium” (higher priced, generally longer aging of the liquid) and also the attraction of Scotch whisky’s single malt and blended offerings. The industry enjoyed great marketing support from two of the largest players: U.K.-based Diageo and France’s Pernod Ricard.

But in the past few years, growth became more challenging, especially in light of currency fluctuations and some economic weakness in emerging markets that had been previously reliable to whisky makers.

Exports to Brazil dropped 20% last year, the Scotch Whisky Association reports, while there was also weakness in Russia and key African markets.

The North American market remained a growth driver. Total exports increased by an additional 1 million cases, or 7.8%, to 14.5 million cases. That region is critical to the industry, as it represents 16% of all exports. Much of the growth lately has been attributed to Single Malt exports, especially in the U.S. and Canada. Single Malts are made from a single distillery, as opposed to a blend that can come from multiple sources.

The biggest players in the category have reported choppy results as well of late. Pernod Ricard, for example, recently reported sales growth for the company’s Glenlivet and Royal Salute Scotches, but a decline for Chivas Regal and a flat performance for Ballantine’s. At Diageo, where Scotch represents 25% of net sales, the category was up a slim 1% for the back half of 2015. That improvement was driven by Johnnie Walker and continued momentum in Scotch Malts and Buchanan’s.

And while Scotch overall reported middling results for 2015, there is still great interest in the category among the biggest spirits makers. Jack Daniel’s maker Brown-Forman (BF-B) recently agreed to pay $416 million to acquire BenRiach Distillery, a bet on the wildly popular Single Malt Scotch whisky category.