Why Apple Shares Just Hit A Near Two-Year Low 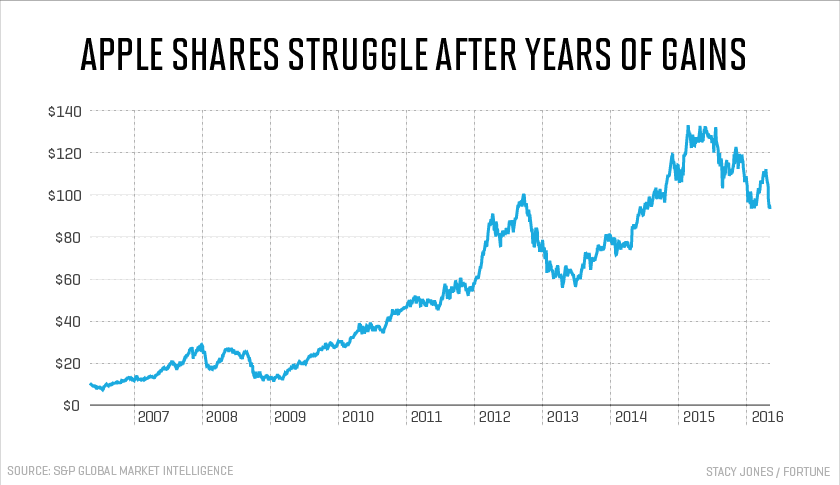 Apple shares dropped to $91.85 in mid-day trading on Friday, the lowest they’ve been in nearly two years. The decline also brings the tech giant’s share price to a level they first hit in 2012, meaning all the gains the stock has made in the past four years have been wiped out. The shares recovered a bit during the day and closed at $92.72, still down 0.6% on the day.

The most recent investor pessimism about Apple comes after it reported weaker-than-expected quarterly results last week, including its first year-over-year decline in revenue in 13 years. In fact, Apple’s shares just ended an eight consecutive day losing streak, from April 21 to May 2, that was the longest since 1998, 18 years ago.

By most typical valuation measures, Apple—still the most profitable U.S. company and with a cash hoard of $233 billion—appears extraordinarily undervalued. To look at just one basic measure, for example, the company’s price-to-earnings ratio of 10 is lower than IBM’s (IBM) 11 or Cisco Systems’ (CSCO) 13. That’s hardly a club of the most vibrant tech companies. In contrast, the price-to-earnings ratio for Google Alphabet’s (GOOGL) is 31 while Facebook’s (FB) is 92.

The market clearly sees Apple as being in a long term decline. After an amazing run, iPhone sales are falling, upgrade rates are sinking and the newest SE model, which carries the lowest entry-level price in iPhone history, is likely to erode average selling prices.

Two other business lines, Mac computers and iPad tablets, are also shrinking. And while debate rages over how characterize the performance of the Apple’s watch, no one sees it replacing the iPhone as the next hit product out of the company’s Cupertino, Calif. headquarters.

In retrospect, much of the iPhone’s growth came in spurts from Apple entering key new markets. In the last two years, the addition of larger iPhone screens and gaining direct access to customers through a partnership with China Mobile, the biggest wireless carrier in the world, goosed sales to extreme levels.

There may not be another untapped market left. The company has targeted India, where its market share is low, but investors are skeptical because of the fractured retailing system for phones there and the extreme poverty in that country.

But another big part of Apple’s current struggles are less numerical and more psychological. As the stock price was rising, Apple triggered alarm bells that have signaled peaks for the stock prices of other large companies over the decades. Apple became the most highly valued public company, was added to the Dow Jones Industrial Average index, and set about building a massive–and massively expensive–grand headquarters.

Most recently, Apple CEO Tim Cook and his team have struggled to maintain their credibility with investors. One sore spot was Cook’s recent push to get investors to focus more on the company’s growing revenue from services such as app sales, movie downloads, and iCloud storage. That may be a legitimate yardstick for Apple, but with all those service revenue still dependent on declining iPhone sales, Cook’s efforts reminded many of similar efforts by other companies with shrinking hardware revenues in the past, like Xerox, suddenly to start emphasizing service revenue.

For more on Cook’s leadership, watch:

Cook’s tangled statements about iPhone upgrade rates have also caused confusion over the sources and sustainability of sales growth. Amid booming sales of the iPhone 6 in late 2014 and early 2015, Cook repeatedly said the company had seen no significant change in upgrade rates, which implied that much of the growth was from new customers. But now with sales of the latest iPhone, the 6S, falling short, Cook has said that upgrade rates for the prior 6 line were unusually high.

Turning around Apple’s falling stock price will be no simple matter. Some investors want to the company to focus on reviving iPhone sales while others are looking ahead to the next hit product (self-driving electric cars, perhaps). Until then, it could be a long wait.