These CEOs Got the Biggest Raises of the S&P 500 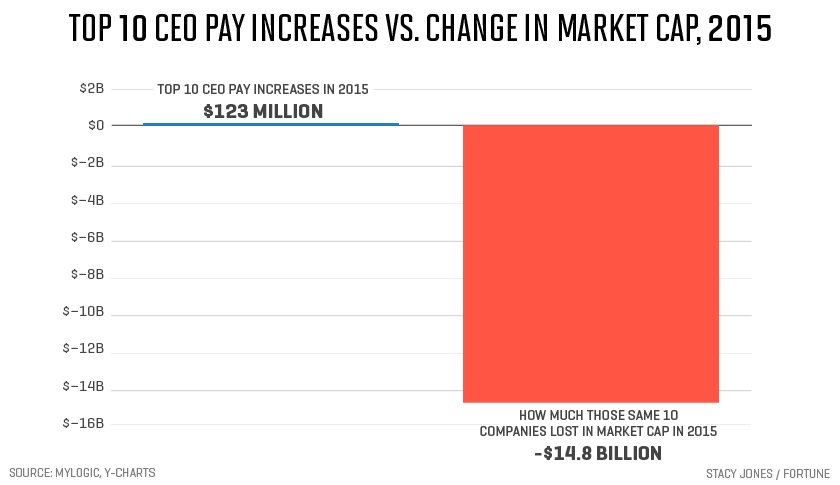 Shares of Howard Schultz’s Starbucks were up 50% last year. Allergan CEO Brent Saunders completed a $70 billion acquisition, one of the largest deals of the year. And earnings at Apple rose 20% in 2015 under CEO Tim Cook, including a single quarter worth $18 billion—marking the most profitable three months ever at a public company.

So which of these CEOs do you think walked away with the biggest raise of 2015? None of them.

That title went to Sandeep Mathrani, the CEO of General Growth Properties. (Cook’s income rose, too, in 2015, by $1 million to nearly $10.3 million.)

General Growth, though, didn’t break any records with its performance in 2015. Both sales and operating profits at the mall operator fell slightly. And unlike Starbucks—where CEO Howard Schultz’s compensation actually fell nearly $1.4 million last year—the company’s stock performance was not in the top five of the S&P 500 last year. It wasn’t even in the top 100. In the past year, shares of General Growth (GGP) are up just 0.7%, making it the 190th-best-performing stock in the index.

Nonetheless, General Growth’s board decided to pay Mathrani just over $39 million for 2015, an increase of $34 million from the year before, or 702%. Mathrani’s pay raise—roughly equivalent to what 797 average full-time American workers earn collectively in one year—was the biggest in 2015 of any CEO in the S&P 500 who had been in that role since at least January 2015, according to data from research firm MyLogIQ. No. 2 on the list was Omar Ishrak, the CEO of medical supply company Medtronic, who made just over $32 million more in 2015 than he did the year before.

Last year was a disappointing one for Wall Street in general. Corporate profits of S&P 500 companies fell by an average of 1.2%, according to FactSet. And most investors were lucky just to stay above water, with the market ending the year basically flat. Overall, the average pay of the CEOs of the S&P 500 who had been in their jobs for more than a year fell $712,000 in 2015. The Wall Street Journal reported that the decrease was the largest since the financial crisis.

Yet while many investors saw their 401(k)s shrink in 2015, at least 213 CEOs of S&P 500 companies saw their pay jump—more than half of them by at least $1,000,000—from the year before, according to research firm MyLogIQ. Of those execs who got a raise, the average compensation was $12.5 million last year. Some were less fortunate: 190 companies cut the pay of their CEOs. But even top executives of that group made an average of $11.4 million. Not exactly hard times.

The slight decline in remuneration also comes after a historic run-up in C-suite paychecks: Pay packages dipped less than 5% last year, while overall median compensation is up more than 40% from 2007.

These numbers are based data compiled by MyLogIQ, which mines corporate filings made with the Securities and Exchange Commission. All the pay figures in this story are those computed using the SEC’s guidelines for calculating executive pay, which can occasionally skew the numbers. The SEC counts as pay all compensation an executive receives in a given year, not just money that was earned for that year. Given that more and more companies have deferred compensation plans, sometimes an executive’s pay can rise because a past payment kicks in, not just because their pay in the past year actually went up.

Another wrinkle is that a some companies—about 15% of the S&P 500—had yet to report their compensation data for 2015 as of last Friday, when Fortune asked MyLogIQ to compile the numbers. When looking at raises, we also excluded CEOs who had been in their jobs for less than a year. That left out, Sundar Pichai, for instance, who became CEO of Google in early 2015. As part of that promotion, Pichai got a raise of $97 million—much of that in restricted stock, but still included in the way the SEC computes his pay figure.

Pichai was far from the only big increase, though. At 80 of the 408 companies Fortune reviewed, CEOs received raises of more than 20% in 2015. Wages for all Americans, by contrast, climbed just over 3% last year. At the top ten companies that paid the highest raises to top executives with fiscal years ending in December, CEOs took home an additional $123 million in 2015 collectively. That was far better than the investors in those companies fared. The market caps of those same companies in 2015 shrank by a collective $14.8 billion.

At least from the outside, it’s hard to see how a number of CEOs who did get multi-million-dollar pay bumps actually earned it. For instance, it was a rocky year for medical device maker Medtronic (MDT). It did announce an acquisition of rival Irish-based rival Covidien, a so-called inversion that will produce annual cost savings of hundreds of millions of dollars a year. But much of that will simply come from paying Uncle Sam less.

A spokesperson for Medtronic said the majority of the Ishrak’s raise had to do with the companies decision to pay a tax penalty assessed the CEO and other executives of the company in relation to its inversion with Covidien. Congress imposed the tax penalty as a means to discourage inversion about a decade ago. “The company believes these individuals should not be discouraged from taking action that they believe is in the best interest of Medtronic and its shareholders. The tax gross up allows them to focus on what is in the best interests of the company, and not on their personal finances,” says a Medtronic spokesperson.

Still even without the so-called tax gross up, Ishrak’s pay last year rose nearly 15%, or more than double the increase in the price of its shares last year.

The CEO with the $1.8 million bonus

FMC was another company where the CEO came out a lot better than shareholders last year. Shares of FMC (FMC) tumbled 30%—an achievement for which the board of the chemical company rewarded CEO Pierre Brondeau with a $6.7 million pay raise to $11.7 million.

FMC said that the $11.7 million, which is what the SEC requires FMC report as income for Brondeau, does not reflect what the company sees as his actual pay. A spokesperson for the company says Brondeau’s actual pay for 2015 was $3.8 million, which excludes $4 million in options and restricted stock that FMC awarded Brondeau as part of new long-term contract that the executive signed in 2015 that won’t vest until 2020, as well as other long-term incentives that accrued to Brondeau in 2015. That $3.8 million, the spokesperson said, was significantly less than what Brondreau could have earned in 2015, under the company’s pay plan, presumably if FMC had had a better year.

Indeed, Brondeau’s new contract was signed in February 2015 (before the company’s stock fell from $64 to $33 in a little under six months). Less explicable: Included in the $3.8 million that FMC calls Brondeau’s “actual pay” was a huge cash bonus that the board said he earned for his performance last year.

One of the measures the company had to exceed for Brondeau to get his bonus: FMC’s adjusted earnings—a fungible accounting term that FMC does not actually define in its prospectus—had to fall less than 36% from a year earlier. Brondeau missed that. The company’s adjusted operating earnings last year fell 38%, according a comparison of the company’s 2015 and 2016 prospectuses. Another target set by the board was that the company’s cash flow from operations had to be greater than a negative $540 million. Brondreau nailed that one. In 2015, FMC’s operations burned through a mere $307 million of the company’s cash. Somehow, as a result, Brondreau earned his bonus and then some—$1.8 million or $500,000 more than FMC’s board had set as a target for Brondreau’s 2015 bonus a year ago.

Some notable CEOs who stumbled in 2015 did have their pay cut. Chipotle (CMG) slashed the pay of its two CEOs, Steve Ells and Monty Moran, by $15 million each in 2015 after the company had a number of bacterial outbreaks at its restaurants, which hurt burrito sales. The company, according to its proxy statement, gave its CEOs a performance ranking of 0. Kinder Morgan, which operates gas pipelines, cut its CEO’s pay by $17.5 million, to just over $1 million, following a 63% plunge in its stock price last year. Like other energy companies, the drop in oil prices has raised questions about the company’s ability to pay back its debt.

And the winner is…

General Growth’s Mathrani—the CEO who got the biggest raise last year—received much of his pay increase in the form of restricted stock, which won’t fully vest until 2020 but gets counted as 2015 compensation because of SEC rules. Still, on top of the $20 million in restricted stock, the company’s board of directors also awarded Mathrani a performance-based $3 million cash bonus for 2015.

Among the targets the mall operator’s compensation committee set out for Mathrani to meet in 2015 was a 1.1% increase in the company’s EBITDA (earnings before interest taxes depreciation and amortization) and a permanent occupancy rate of at least 93.5%, neither of which the company actually achieved. But General Growth’s board chose to go ahead and grant Mathrani his $3 million annual performance bonus anyway, in part because, according to the company’s proxy statement, part of the shortfall was due to a number of retailer bankruptcies which were, presumably, out of Mathrani’s control. A spokesman for General Growth declined to comment.

The company noted in its proxy statement that last year that there had been concern among the company’s shareholders that General Growth didn’t have a strong link between the company’s performance and what it was paying its executives. As a result, the company said it had made changes to its compensation structure that now achieve that goal. “We seek to foster a performance-oriented environment by directly linking a significant part of each executive officer’s total compensation to short-term operating performance and long-term stockholder value creation,” General Growth said in its proxy statement.

Linking pay to performance is a worthy goal—and one that, for a surprisingly large number of companies, continues to be elusive.