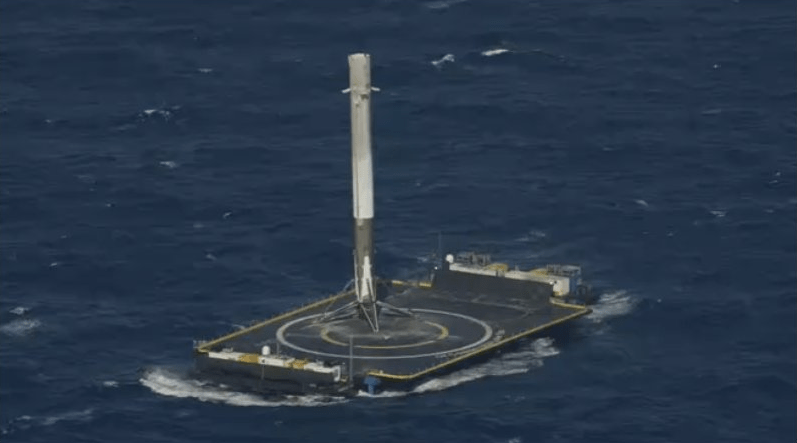 SpaceX made history Friday afternoon by successfully landing the first stage of a Falcon 9 rocket on a floating drone ship in the Atlantic Ocean following the successful launch of a resupply mission bound for the International Space Station.

The first stage rocket booster made a perfect landing on SpaceX’s drone ship, coming to rest upright just meters from dead center on the landing pad.

Today’s landing marks SpaceX’s fifth try at setting down one of its booster stages on its unmanned drone ship—cheekily named Of Course I Still Love You—and the first that didn’t end with the destruction of the rocket. The successful touchdown marks a historic achievement, not only for SpaceX, but for spaceflight in general. The ability to successfully recover and reuse rocket boosters could drastically reduce the high cost of launching people and objects into orbit and beyond.

The company successfully landed one of its Falcon 9 first stage boosters on dry land at Cape Canaveral in December, but having proven its landing systems work and that rocket recovery is indeed feasible, it returned to exclusively attempting the much more challenging drone ship landings. Such drone ship landings are necessary if SpaceX is going to achieve its long-term objective of providing regular and relatively inexpensive space launch services by recovering and reusing its first-stage rocket boosters.

Missions to higher orbits require rockets to travel too fast and too far from their point of origin to make terrestrial landings feasible. It simply requires too much extra fuel to turn the first stage around and pilot it all the way back to its launch site (it’s also safer to land rockets at sea rather than on land, where even a “near miss” could threaten populated areas).

Landing on the drone ship at sea requires the first stage to carry less fuel for its return trip, cutting weight and mission costs. The ability to land at sea consistently would be huge for SpaceX, in theory enabling it to recover the first stages of its Falcon 9 rockets—and the nine costly Merlin rocket engines contained in each one—for virtually any mission regardless of how high and fast the rocket must travel to deliver its payload to the proper orbit.

The launch also marks SpaceX’s first flight to the ISS since a similar mission in June of last year ended abruptly when the rocket disintegrated mid-flight due to a mechanical failure.

Though today’s landing marks a historic milestone for SpaceX, the company has a lot more work ahead of it if it wants to meet its ambitious target of launching 18 rockets this year. Today’s launch marked the just the third launch of 2016, meaning the company has 15 launches to go and a shade less than nine months to complete them.

The rocket launch on Friday placed a SpaceX Dragon capsule on a path to link up with the ISS on Sunday morning carrying a range of experiments and supplies, as well as an experimental inflatable habitat.