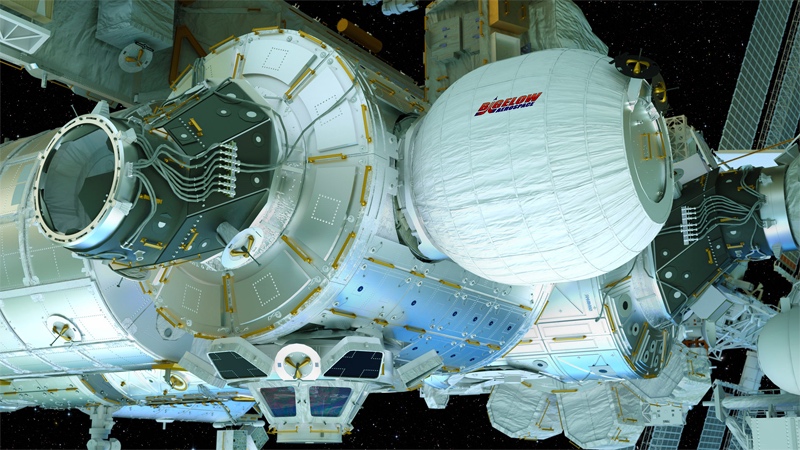 Robert Bigelow plans to make his next billion the same way he made the last one: Figure out where people are going next and provide them a place to stay once they get there. When a SpaceX rocket launches toward the International Space Station as soon as Friday afternoon, a part of the real estate and hotel magnate’s empire will go along for the ride in what could be a key turning point for Bigelow’s fantastic and oft-mocked vision of bringing affordable, scalable lodging to space.

Packed among the cargo headed to the ISS is the Bigelow Expandable Activity Module, or BEAM, an inflatable, cocoon-like living space that will be the first of its kind to be occupied by humans in space. Once attached to the exterior of the ISS, the six-foot by eight-foot BEAM will inflate to more than five times its compressed size to provide more than 500 cubic feet of extra livable space—roughly the size of a small bedroom—to the space station’s crew.

Over two years ISS astronauts will then monitor the BEAM, venturing inside periodically to determine whether Bigelow’s inflatable habitats can hold up to the harsh space environs that include huge swings in temperature, an ongoing bath of solar and cosmic radiation, and the occasional collision with space debris. If they do, NASA will likely invest more in the concept.

Bigelow knows a thing or two about getting out in front of a real estate boom. In the 1980s he built an empire by buying up cheap real estate across the American Southwest, where land was cheap and budding communities were beginning to take root. On some of that land he built a vast chain of Budget Suites of America hotels. He’s sold other holdings over the years as prices in the region spiked, while the rest makes up a vast real estate portfolio.

Like travelers in the Southwest, future space travelers are going to need a place to stay. The BEAM could be a big first step to creating relatively inexpensive, self-sustaining, and habitable Bigelow-branded real estate in orbit and beyond. Developed for just $25 million ($17.8 million of which came from NASA), the BEAM represents a bargain. Its collapsible design and low weight relative to the kinds of rigid structures that comprise the $100 billion International Space Station make it much less costly to launch into space as well. At roughly 3,100 pounds deflated, it will make up less than half of the 7,000 pounds of payload bound for the ISS.

Packed into what is essentially the trunk of the Dragon capsule, the BEAM will be removed from the docked spacecraft using the ISS’s robotic arm and affixed to one of the space station’s external ports. It will then be inflated over the course of about 45 minutes. Once expanded and pressurized, it will remain largely empty—the materials are still a little too new for the station’s human crew to take up extended residence in the module. Four times a year, crew members will enter the BEAM and take stock of how Bigelow’s proprietary soft, expandable material is holding up to the harsh conditions in outer space.

After the two-year evaluation, the BEAM will be jettisoned into space, its trial run complete. Some time later it will burn up in Earth’s atmosphere. But Bigelow’s engineers have other inflatable habitats in various phases of development. The so-called B-330 is a larger expandable habitat complete with it’s own propulsion system for maneuvering in orbit and its own life-support systems, meaning it could function as a stand-alone habitat for scientists or tourists independent of other space capsules or stations like the ISS. A much larger inflatable habitat known as Olympus would boast 2,250 cubic meters of interior space and is so large that no existing rocket could loft it into orbit.

If the BEAM proves successful, Bigelow is betting on other billionaire space entrepreneurs—visionaries like SpaceX founder Elon Musk and Blue Origin founder Jeff Bezos—to provide the necessary means to move both his inflatable habitats and the people that will eventually inhabit them into orbit (SpaceX’s new, larger rocket—the Falcon Heavy—could launch for the first time later this year). Or perhaps even to the moon, where Bigelow has openly talked about eventually employing his company’s inflatable habitats to establish a permanent human presence on the lunar surface.

That’s a moonshot in every sense of the word. But alongside Bezos and Musk, Bigelow is in pretty good company. Bezos’s Blue Origin just launched and successfully landed is reusable New Shepard rocket for the third time. SpaceX’s Falcon 9 now makes regular trips to orbit. It will carry the BEAM to the ISS as soon as Friday, and carry astronauts into orbit for the first time as soon as 2017. If the BEAM experiment proves successful, Bigelow may soon join an exclusive league of billionaire space entrepreneurs who everyone called crazy until it turned out they weren’t.