These Two Beers Fueled the Industry’s Growth in 2015 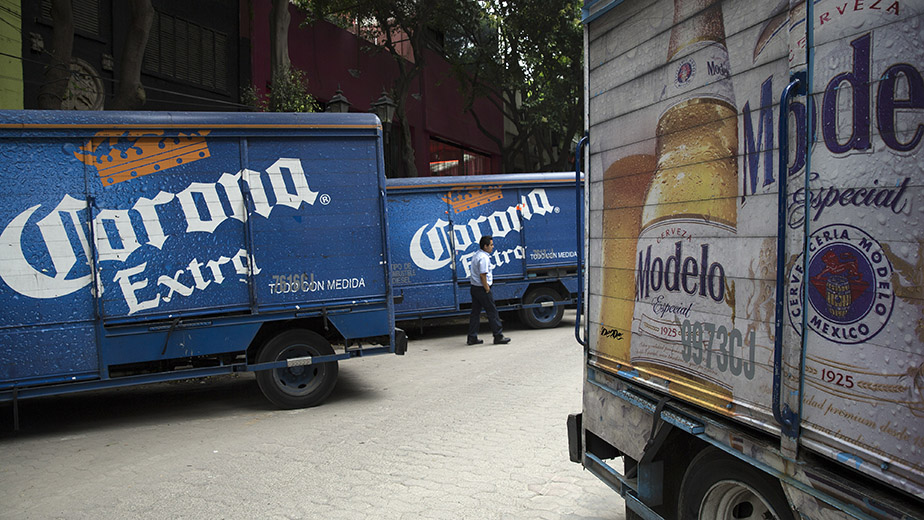 Trucks with Constellation Brands Inc. Corona and Modelo beer sit during a delivery in the Zona Rosa neighborhood in Mexico City, Mexico, on Wednesday, June 24, 2015. Constellation Brands Inc., which earlier this month announced plans to invest in a $2.3 billion plant in Mexico, is scheduled to release quarterly earnings results on July 1. Photographer: Susana Gonzalez/Bloomberg via Getty Images
Photograph by Susana Gonzalez — Getty Images

Investors cheered the news, sending shares up about 5% in Wednesday trading.

“Our beer business has accelerated every year since 2010,” CEO Robert Sands told investors during a conference call. “Our flagship Corona Extra brand has been the number one imported beer brand for almost 20 years and today is the number five beer brand overall in the U.S. industry.”

The fiscal 2016 results Constellation Brands (STZ-B) reported on Wednesday were led by a strong 14% increase in beer sales, with much of increase coming from the portfolio of Mexican beers that have been a star performer in the U.S. market. Beers like Modelo Especial and Corona are easy to drink, much like many U.S.-made light lagers. But they don’t stir the same scorn that some beer drinkers have for domestic beers like Bud Light and Miller Lite.

The latest beer results also benefited from the contribution of some sales from craft brewer Ballast Point, which Constellation Brands agreed to purchase in a $1 billion deal. On Wednesday, the company announced another deal, buying The Prisoner Wine Company brands in a deal that is expected to cost about $285 million in cash. That brand’s wines have posted volume growth an an annual rate of 30% over the last three years, reaching 175,000 cases.

While Constellation Brands is a big seller of wine and also has a spirits business that includes Svedka vodka, most of the excitement among investors is around the potential of the growing beer imports business.

Sands says there’s a lot of potential for the Mexican beers to continue to win over customers. The company is gearing up to spend more on marketing as it heads into the key summer selling–Corona especially sells strongly during the Memorial Day-Labor Day holidays. Modelo Especial, meanwhile, surpassed 70 million cases last year and hit $1 billion in sales. That brand has doubled in just five years.

Ballast Point is another key opportunity. That beer brand sold nearly 4 million cases last year–it was the biggest gainer among the Brewers Association’s top 50 list for 2015 (the brand will eventually be removed from that list because of the takeover deal).

Those growth levers should help Constellation Brands meet the targeted sales growth in the 14% to 17% range for the current year, Sands said.