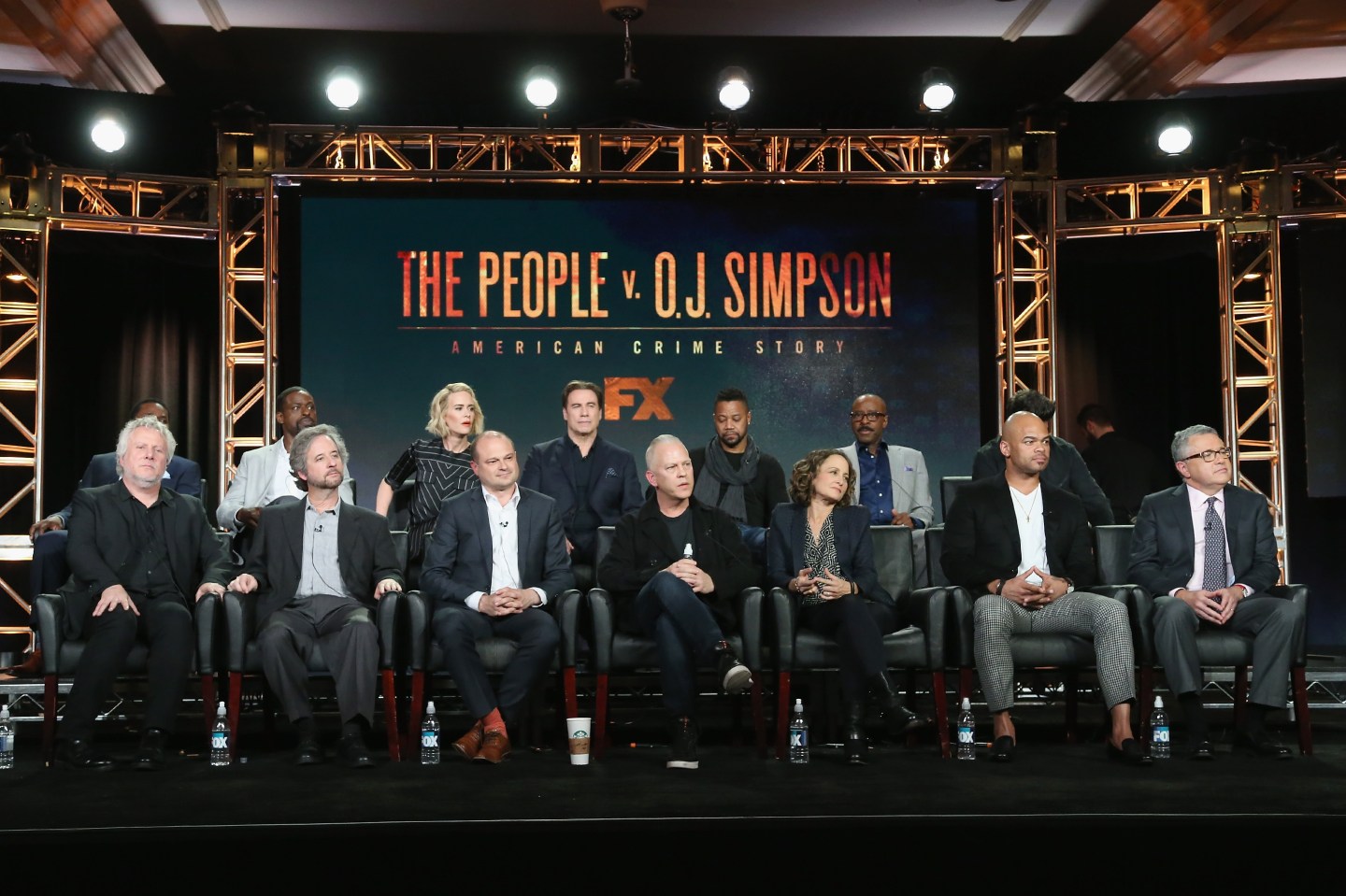 Once again, a television series is proving that American audiences have a thirst for stories revolving around real people and actual crimes.

The People vs. O.J. Simpson: American Crime Story debuted last week to record ratings for its network, FX, while a documentary that also focuses on the 1995 O.J. Simpson murder trial airs on ESPN this summer, proving that two decades is not long enough to drain the interest of American viewers in the so-called “trial of the century.”

Of course, The People vs. O.J. is just the latest example of a true crime story captivating viewers recently. From the podcast Serial to Netflix’s Making a Murderer, the genre’s popularity is surging.

America’s fascination with true crime storytelling has existed for quite some time, with Truman Capote noting in the 1960s that he’d created a new art form (the “nonfiction novel”) with In Cold Blood, his best-selling account of the gruesome murder of a Kansas family.

But, what’s different about the latest flood of movies, documentaries and podcasts is that the focus is less on the gory details and more on what happens once the wheels of justice begin to spin. What seems to be of the utmost interest to fans of these stories is how their subjects may or may not have been victimized by the American criminal justice system. And, it is likely no coincidence that the public’s appetite for stories about a flawed criminal justice system is growing.

In an oft-cited statistic, America has roughly 5% of the world’s population but can claim around 25% of the world’s prisoners (about 2.3 million people). Which suggests that more Americans than ever have had some experience — or know someone who has — with the criminal justice system. Groups like The Innocence Project have spent years helping to bring stories of the wrongfully-imprisoned to the public’s attention—sometimes resulting in exoneration.

Meanwhile, in the last year, YouTube videos of alleged police brutality have gone viral, helping to inspire the growth of the #blacklivesmatter movement, and America’s swelling prison population has even become a subject in presidential debates.

Here are seven highly-praised and massively-popular documentaries, TV series, and a podcast, that offer in-depth looks at the U.S. criminal justice system—warts and all. While some have been criticized for not giving enough attention to the murder victims, the shows no doubt are contributing to the debate over the role that factors such as race, class, privilege, and (sometimes) plain bad luck can play in matters of criminal justice. And in some cases, the shows are exposing so many flaws that the case is reopened.

Errol Morris' seminal 1988 documentary essentially wrote the book on true crime investigations committed to film. The Thin Blue Line examined the incarceration of Randall Adams for the 1976 murder of a Texas police officer. Morris dug into new evidence around the killing and the film uncovered facts proving that Adams was innocent, and that the real killer was actually a teenaged drifter named David Harris who had spent the evening with Adams.

The Thin Blue Line helped exonerate Adams and helped police nab the real killer, but only after Adams had served a dozen years in prison for a crime he didn't commit. The film examines the potential consequences that arise when law enforcement officials zero in on one suspect and work to build a case against that person while ignoring any contradictory evidence.

Though it is nearly three decades old, The Thin Blue Line is seen as a major influence on the current crop of true crime narratives that explore the flaws of the criminal justice system. Morris recently spoke to Slate about the growing trend of true crime in the media, calling Making a Murderer a powerful story that exposes "the horror of the courts." Meanwhile, the famed filmmaker will soon join in on the trend himself, with a new Netflix documentary series he has in the works that he says "has an element of true crime in it."

The first season of Serial sparked a wave of interest in advertising for podcasts when it debuted two years ago. The WBEZ audio series initially focused on the 1999 murder of Baltimore high school student Hae Min Lee and its popularity grew to the point that fans began flocking to real-life locations that had been mentioned on the show and were connected to the alleged timeline around the murder trial that was the podcast's focus. As would later be the case with Making a Murderer, Serial inspired a resurgence of interest in a dormant case as fans theorized on the possibility that law enforcement officials had put the wrong person behind bars.

Now, Adnan Syed, who was convicted of murdering Lee, is back in court seeking a new trial as his lawyers put forth what they describe as new evidence brought to light in the wake of the podcast.

Meanwhile, Serial is now airing a second season that focuses on accused Army deserter Bowe Bergdahl after the show's producers won a Peabody award for a massively popular first season that even spawned multiple spin-off podcasts.

Robert Durst appears in Manhattan Criminal Court on December 11, 2014 after being charged with trespassing on his brother's property. He was found not guilty.

The life of estranged New York real estate scion Robert Durst had already garnered plenty of fascination long before the HBO documentary miniseries The Jinx aired last February. Durst's privileged upbringing and his alleged connection to a series of murders, as well as the disappearance of his first wife, all add up to an intriguing story that was even made into a Hollywood film starring Ryan Gosling in 2010.

But, HBO's The Jinx provided an in-depth look at Durst's odd behavior and quirky personality traits, while also bringing to light crucial new evidence that eventually paved the way for authorities to revive at least one murder case associated with Durst.

Unlike Serial, which explored how a suspect's race and religion might have been held against him, The Jinx riveted viewers by exploring the role of privilege and how Durst's high-priced legal defense team could manage to help him evade the most serious criminal charges against him even when, in one case, he'd actually admitted to having dismembered a person's body. (In that case, Durst's team secured a plea deal that gave him only a five-year prison sentence on relatively minor charges of bond jumping and evidence tampering.)

What's more, Durst's high-profile arrest just before the airing of the series' final episode sparked even greater interest in the documentary's narrative and the outcome for its subject.

The Netflix (NFLX) original documentary series Making a Murderer has been so popular since its December debut that it inspired protests as well as the creation of multiple petitions to get new trials for the series' central figures, Steven Avery and Brendan Dassey. Both Avery and Dassey are currently serving life sentences in prison following their convictions in connection with the 2006 murder of Teresa Halbach. One petition for a White House pardon of Avery even collected more than 125,000 signatures and prompted a response from the nation's highest office (which reminded fans of the show that the federal government is not able to overturn a state conviction).

Making a Murderer is one of multiple examples of a true crime narrative so evocative that it revived momentum in a once dormant case, as Avery recently hired a new lawyer in the hope of mounting a fresh appeal of his 2007 conviction. Meanwhile, Netflix's success with the Avery case has even paved the way for an Investigation Discovery follow-up television special on the case that aired last month, while former Wisconsin District Attorney Ken Kratz is reportedly writing a book about his experience leading the state's prosecution against Avery and Dassey.

Michael Peterson listens as his defense attorney David Rudolph makes his opening statements in Peterson's request for a new trial Tuesday in 2011.

The documentary miniseries Soupçons (also known as The Staircase) actually debuted on French television in 2004. But, the massive popularity of Making a Murderer inspired the Sundance Channel to re-air The Staircase last month, while making the series available to subscribers for streaming online through the middle of next month.

The series centers on American novelist Michael Peterson, who was convicted in 2003 of murdering his second wife, Kathleen Peterson, after she was found dead at the bottom of their staircase in their North Carolina home. Once again, this series focused on the possibility that seemingly unrelated factors may have conspired against Peterson, as the conservative jury may have been biased against him due to his bisexuality.

The series even includes interviews with jurors following Peterson's conviction, with director Jean-Xavier de Lestrade asking them why they found Peterson guilty. The filmmaker also made a follow-up to the series in 2012 to cover Peterson's successful appeal, which led to a judge granting Peterson a new trial that has yet to commence.

Debuting last month, Discovery Channel's Killing Fields follows a retired Louisiana detective as he reopens a cold case: the 1987 unsolved murder of Eugenie Boisfontaine, then a 34-year-old graduate student, in Louisiana. What sets this series apart is that it approaches the crime in question from the perspective of a police officer who actually worked the case the first time around. Killing Fields follows that man, Rodie Sanchez, as he sifts through new evidence and tries to figure out what may have slipped through the cracks nearly two decades earlier.

Of course, as the series has only just aired, it remains to be seen whether or not it will have a similar revelatory impact as some of its predecessors, but it still stands as yet another example of TV's growing true crime trend.

O.J. Simpson looks at a new pair of Aris extra-large gloves which the prosecutors had him put on for the jury 21 June 1995 during his double murder trial in Los Angeles.

The People vs. O.J. Simpson: American Crime Story debuted on FX last week and immediately handed the 21st Century Fox (FOX) subsidiary its most-watched premiere of an original scripted series in the network's 22-year history. FX said 12 million people tuned in for the first episode of producer Ryan Murphy's (Glee, American Horror Story) series, which seems to have successfully reignited American viewers' obsession with one of the most high-profile criminal trials ever.

Featuring a star-studded cast (Cuba Gooding Jr., John Travolta, Sarah Paulson), the series highlights some of the trial's most prominent themes, such as fame and race, while focusing on how the state's prosecution tried to build its criminal case against Simpson only to watch it come undone. It's also no coincidence that the series' first episode opens with footage of the Los Angeles Police Department beating Rodney King and the L.A. riots of the early 1990s, as both events fed into the public distrust of local law enforcement officials that might have had a role in the jury's verdict in the Simpson case.

Meanwhile, viewers hungry for more nostalgia around the O.J. Simpson trial can also look forward to a new 5-part documentary miniseries on Simpson's life, career, and the polarizing murder trial. That documentary, called O.J. Simpson: Made in America, will air on ESPN in June.