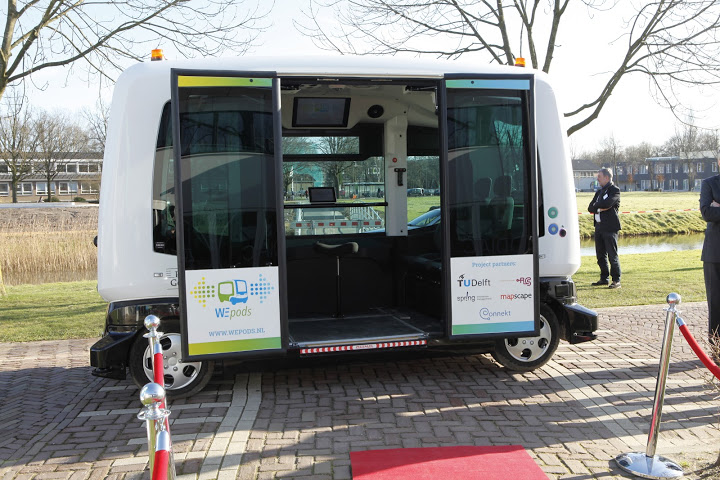 A driverless bus in the Netherlands
WEpods

The first self-driving bus to operate on fully public roads debuted in the Netherlands last week. The bus, known as a WEpod, had an inaugural demonstration and will undergo a testing phase. It is expected to enter regular service by this summer.

Fully electric and capable of speeds up to 25 miles per hour (though they’re only planned to operate at about 16 miles per hour) the WEpods will provide regular service along a roughly four-mile route on the campus of Wageningen University.

With six seats facing inward and no steering wheel, the autonomous buses were produced in collaboration between several parties, including Delft Technical University and Easymile, itself a joint venture between French auto-maker Ligier and the robotics firm Robosoft.

The lack of a steering wheel is a distinct achievement. WEpod’s makers claim it will be the first fully driverless vehicle to operate on a public road. And though the likes of Google often test their vehicles in public settings, people are always able to take control as needed. In fact, human drivers have bailed out Google test cars more than 340 times over the last 15 months.

Easymile also produces a similar driverless shuttle known as the EZ10, which the company says is “designed to cover short distances and predefined routes.” But the WEpod’s limited, well-defined route vastly simplifies the technological demands of EZ10 project, since detailed mapping is one of the key components of driverless systems. The WEpod will still have to react to pedestrians and other vehicles, using cameras, radar, and laser-based sensing equipment to do so.

Though the names involved may not be well known in the U.S., the team behind the project has a robust pedigree. The Technical University of Delft is one of Europe’s most respected engineering institutions, and last week Delft’s student team took second place behind MIT in SpaceX’s Hyperloop Pod Design competition.

Why self-driving cars are crashing: humans

Auto-maker Ligier has also been experimenting with automation, particularly self-parking, since the mid-to-late 1990s. In fact, this video from that period is a must-watch for people interested in automated mobility:

However, perhaps the most important aspect of WEpod is that it demonstrates how automation can personalize public transportation in new ways. WEpod passengers will be able to book a ride on the buses through a smartphone app, which will likely include Uber-like arrival time information and allow the vehicle to stop specifically where the rider is waiting.

Though for now the WEpod is limited to a predefined route, that intersection of mobile data and transit opens up a much wider array of possibilities. In the not too distant future, driverless, multi-passenger vehicles similar to the WEpod could pick up multiple riders at their doorsteps and deliver each to their individual destination, all while cutting traffic congestion and saving energy. They could even render the idea of a traditional bus—with its excruciating waits and limited routes—obsolete.