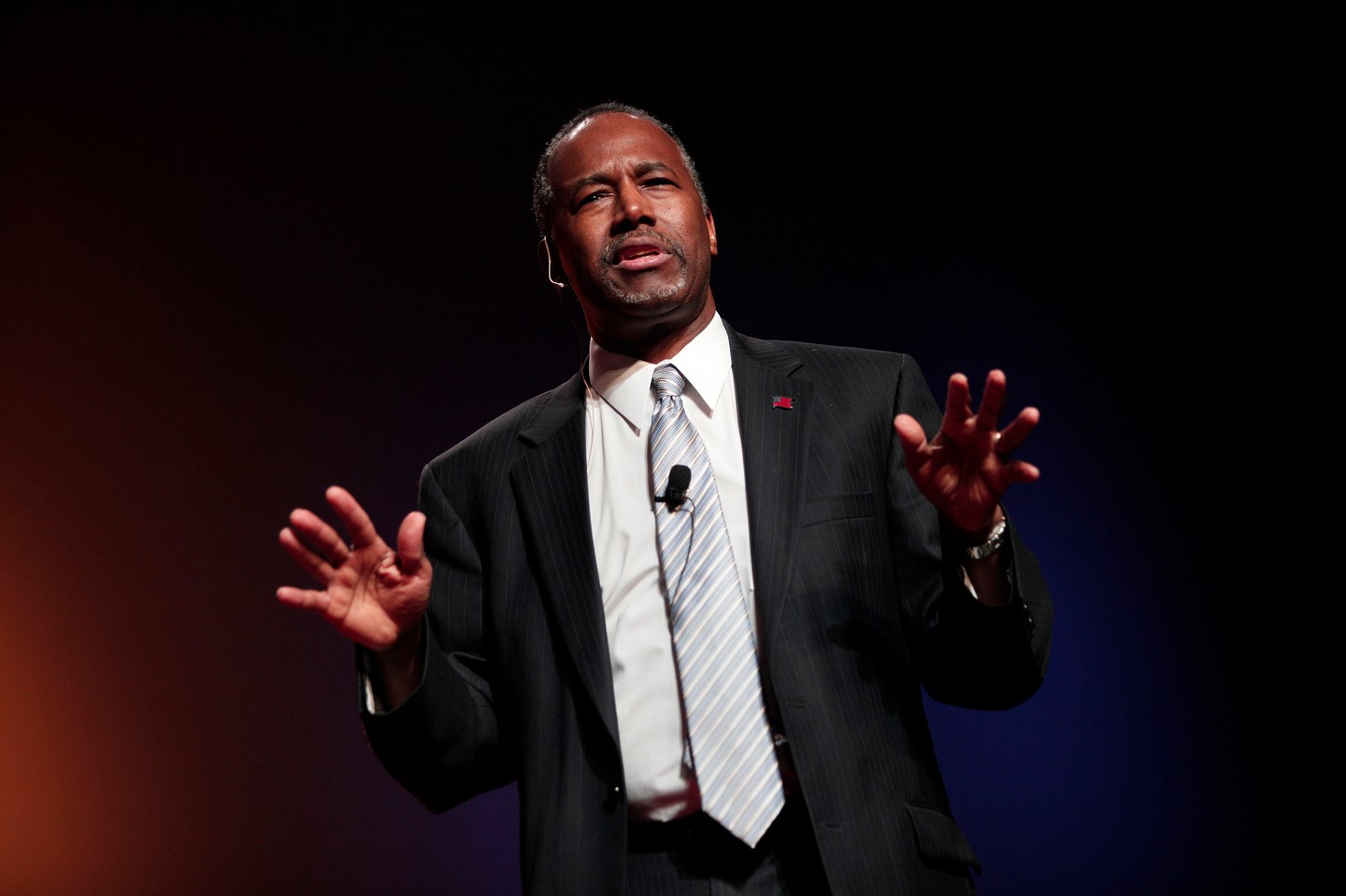 DETROIT, MI - MAY 4: Republican Dr. Ben Carson, a retired pediatric neurosurgeon, speaks as he officially announces his candidacy for President of the United States at the Music Hall Center for the Performing Arts May 4, 2015 in Detroit, Michigan. Carson was scheduled to travel today to Iowa, but changed his plans when his mother became critically ill. He now will be traveling to Dallas instead to be with his mother Sonya. (Photo by Bill Pugliano/Getty Images)
Photograph by Bill Pugliano via Getty Images

Presidential hopeful Ben Carson believes the only way to keep the U.S. safe from major hacking attacks and data breaches is to create a new federal government agency.

The retired neurosurgeon and Republican presidential nominee said on Monday that he would establish a National Cyber Security Administration that would act as a central hub for all of the government’s cyber security programs and initiatives.

Carson, who generally opposes new government spending and advocates for shrinking down the government, did not say how big the NCSA would be or how much it cost. But he stressed that it would not be “a new federal bureaucracy.”

In a outline of his plan, Carson explained that government agencies do not talk enough to each other about their cyber defenses. A new agency would essentially be a middleman that various federal departments could ask for guidance about how to best secure their data.

Carson’s plans don’t explain what constitutes proper data handling practices, but he promised that, if elected, “no agency or official, regardless of seniority, will think they could keep sensitive or classified information on personal email servers.” That is likely a reference to Hillary Clinton and her practice of using a personal email account to access work-related emails. This email issue is a focal point of ire for many Republican candidates who say she should be prosecuted for mishandling sensitive information.

Carson’s new cyber security administration would also act as a research organization that would explore new user verification technologies that could replace the common password system that’s widely used today. Additionally, the NCSA would act as a national standards body for cyber security tools and would “provide certifications for products which meet established security standards.”

Typically, Republican presidential candidates rail against the federal government for general incompetence, particularly at the Internal Revenue Service and the Department of Veterans Affairs. In this case, Carson is a singing a different tune by painting the federal government as an able arbiter of deciding good computer security from bad.

As for the growing discontent between the government and businesses like technology giants Apple (AAPL) and Salesforce (CRM) over the notion of sharing security data to potentially prevent future attacks, Carson believes that the new agency would help bring them closer together. But he doesn’t explain how he would bring the two sides together on something that is a deeply divisive issue involving privacy and how the government accesses user information from tech companies.

“We must build incentives to ensure critical private entities, like those that are a part of the electric grid, have the right incentives to maintain top-notch security practices with up to date software patches,” he wrote.

Finally, the NCSA would also act as a central hub for privacy and civil liberty worries by giving Americans “one phone number to call for any complaint or concern” they may have about how their personal data is being used by the government. The agency won’t be part of the military, but it “will work with them when national security demands it.”

For more on the presidential race watch our video:

Carson compared the need for the U.S. to improve cyber security to the Cold War era space race between the U.S. and the former Soviet Union. He believes that the government is slow to adapting to advances in technology and his proposed NCSA will function like NASA and will “organize and streamline our efforts to secure America’s online presence.”

According to recent polling data, Carson currently ranks fourth place for the upcoming Iowa Caucuses, in which Donald Trump leads the Republican candidates. It was only last October in which Carson was reported to be leading Trump in the Iowa Caucus.