The NBA’s New Store Is a Tech-ified Basketball Temple 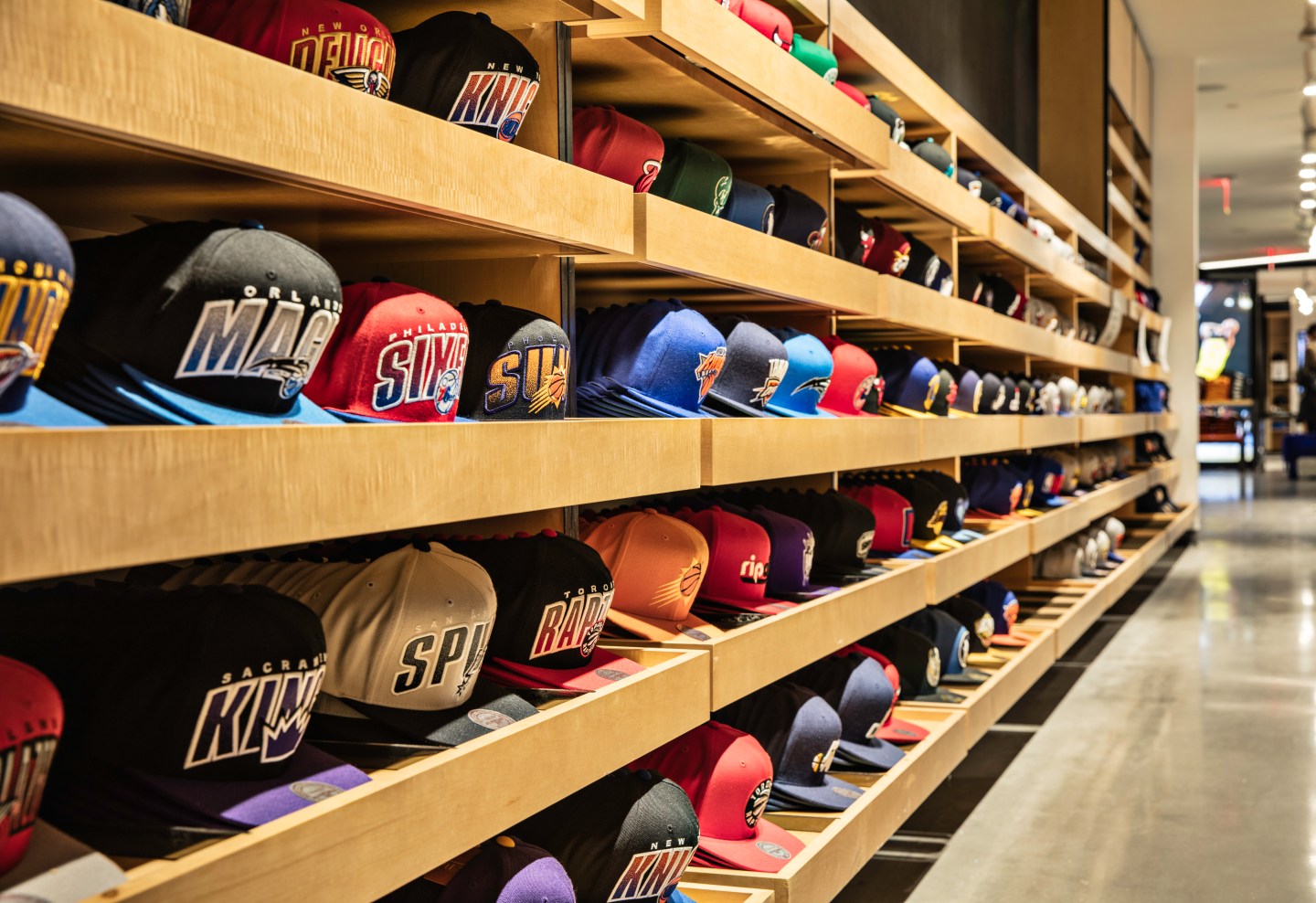 Basketball fans: There’s a new store in town. It’s the only official store in town, in fact, if “town” is the United States.

On Monday, the NBA opens its brand new flagship store in Manhattan, a few blocks from Times Square, at 45th Street and 5th Avenue. It is the only NBA store in the country, though the league operates 151 in places like Taiwan, China, and Korea.

Fortune got an early look inside the gargantuan new merchandise mecca. It is 25,000 square feet in size, spans three levels, and presents the pedestrians outside with a 32-foot-high, 22-foot-wide neon basketball net that hangs from the top floor down to the ground level. A 40-foot sneaker wall inside displays shoes in front of huge photos of iconic slam dunks that players like Dee Brown, Vince Carter and Dominique Wilkins landed in their day. On the floor in front of the shoe wall are footprints placed where the player took off from the parquet into the air to perform the dunk.

The company is opening this NBA store smack in the middle of its busy season. As Fortune has written, the holidays are the company’s Super Bowl in terms of sales. Fanatics ships some 70,000 orders on a normal day, but after Thanksgiving, that number balloons to as much as 700,000. And while technology is its strength, the company also makes some of the apparel it sells.

The deal to manage the NBA Store, which it signed in May, is new territory for Fanatics, although it does have some relevant experience in brick-and-mortar on a smaller scale, thanks to recent retail promotions at NASCAR tracks and at college and pro stadiums. “This is huge for us,” says Brendan McQuillan, VP of stadium commerce for Fanatics.

Building the store has been a big job for Fanatics, which is usually a behind-the-scenes partner. While the NBA is calling its store “a Fanatics experience,” the average shopper is not going to notice the presence of Fanatics, and that’s just fine by them. The NBA is the draw, especially with its stars (like LeBron James, Steph Curry and Jeremy Lin) more focused than ever on building themselves into global brands.

The NBA’s original flagship store in New York closed four years ago, and since then it has had only a temporary, smaller one there operated by Adidas, the league’s official apparel sponsor. Adidas will lose that deal to Nike at the end of the next season (it chose not to bid to renew) and so the store is in the awkward spot of bearing heavy Adidas branding for only one more year. But Adidas having the exclusive apparel deal doesn’t extend to in-store placement, so there is also a lot of Nike, Under Armour, and Majestic merchandise.

The shop is a tech-ified temple at every turn, with touch-screens throughout, an NBA2K video game station, and a customization area where shoppers can put any name they want on a jersey (their own or a player’s) and watch it get made right in front of them in 10 minutes flat.

The league and Fanatics have wisely focused on making a store that is changeable to suit current trends. Chris Brennan, SVP of global retail development and merchandising for the NBA, tosses out terms like “athleisure” (stylish fitness gear worn as everyday clothing) and “snapbacks” (fat, adjustable caps with flat brims) as he shows off the store. Pointing out one corner, he told Fortune, “We are looking to pick up on trend and really keep this section fresh.” McQuillan added, “Many of the areas we want to turn a lot. We have to. What’s cool will change constantly, so that’s how we’ve designed this store, to change and test things very quickly and easily.” For example, if the Golden State Warriors go on another record winning-streak, the whole section might briefly push Warriors gear.

Last year, the NBA’s merchandise sales rose nearly 10% in a sign that fans still want to show off their team spirit, whether or not they’re attending games at the stadium. And, in a reminder of how the league is still attractive to sponsors, one corner of the store’s third floor devotes a corner to State Farm. A store rep will stand behind a counter—to help you sign up for State Farm insurance? No, it’s simply a branded wall; the sales associate there has no connection to State Farm. Does the State Farm wall look a little strange? Yes, but the NBA’s Brennan says, “State Farm has such a strong association with the league that we feel it will work.”

With so much glitzy technology, it’s likely the overall store will work, too—and that will be a boon to Fanatics.