Stephen Curry has big faith in this private coaching startup 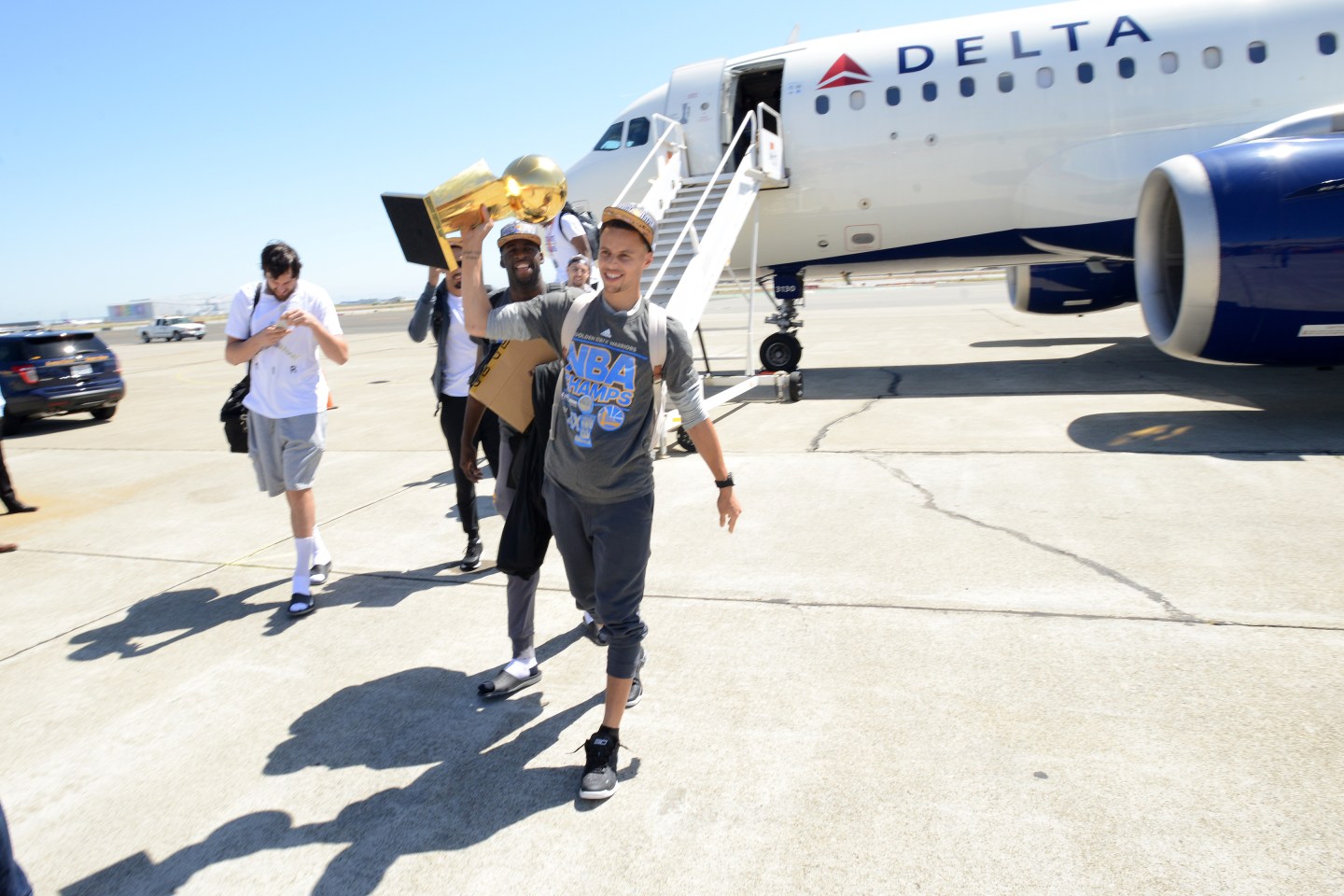 OAKLAND, CA - JUNE 17: Stephen Curry #30 of the Golden State Warriors greets the fans of the Golden State Warriors as the team arrives home from Cleveland after winning the 2015 NBA Finals on June 17, 2015 in Oakland, California. NOTE TO USER: User expressly acknowledges and agrees that, by downloading and/or using this Photograph, user is consenting to the terms and conditions of the Getty Images License Agreement. Mandatory Copyright Notice: Copyright 2015 NBAE (Photo by Noah Graham/NBAE via Getty Images)
Photograph by Noah Graham — NBAE/Getty Images

Most professional athletes, apart from a select few megastars, find that they have no steady income stream once they leave sports. And as the road to reach professional sports gets more competitive than ever before, young amateur athletes are looking for ways to train during the off-season—to stay sharp and, they hope, eventually get recruited.

Jordan Fliegel has found the way to cater to both. His company CoachUp pairs young people (or their parents) looking for private coaching with a former college or pro athlete looking to coach. The site sets up a page for private coaches in order to track their clients and handle appointments. It also lets them set their own pricing packages. A percentage fee from each appointment goes to CoachUp. Athletes looking for a coach can use the site for free and find potential coaches, as well as ratings and reviews. It’s easier for finding a match than a broad Google search would be; think of it like Yelp (YELP) for athletic coaching.

Launched in May 2012, CoachUp has raised $9.35 million in funding and is home to 15,000 active coaches working with more than 200,000 athletes. But most impressive is the murderer’s row of athletes that have jumped in with Fliegel as investors: New England Patriots receiver (and current Super Bowl champion) Julian Edelman, Boston Bruins legend Cam Neely, and former Boston Red Sox outfielder Gabe Kapler. The company has also attracted support from people in business and government, among them former Massachusetts senator Scott Brown (an advisor) and former Reebok execs Dennis Baldwin (board member) and David Pace (board member).

Recently, the site announced the biggest star to join its firmament: Stephen Curry, the Golden State Warriors guard and newly minted NBA champion. Curry owns an equity stake in the company and will be, the company says, “the face of CoachUp.” (Current and former pro athletes dipping a toe, or dollar, into tech investing has become commonplace lately, from Tiki Barber to Dwyane Wade.)

Fliegel, the founder, represents the typical coach using the platform. He grew up in the Boston area and was never good enough at basketball to make his high school team until he worked with a private coach who had been the basketball captain at Brandeis University. After Fliegel made his high school team he went on to play Division III ball at Bowdoin College, then professional ball in Israel, but never in the NBA. When he moved back to the United States, he sought a way to get involved in tech and also cater to college athletes like him.

“Most athletes don’t make a ton of money, they play overseas or in the minor leagues for a while,” Fliegel tells Fortune, “and in women’s sports that’s especially true. So CoachUp is the perfect thing for them. And on the user side, the majority of our users are kids in grade school or high school, they’re trying to make the team. We’ve really emerged not just as the leader in private-coaching, but I think you could make the case that we’re the leader in sports coaching in America, period.”

Curry, like Fliegel, credits his own success to the use of a private coach. And as he is the hottest NBA star of the moment, he is CoachUp’s biggest star ambassador. “I don’t get involved with too many things that I don’t use myself or have a history with,” Curry told Fortune by phone. “The actual idea behind what we’re selling is relevant to me, I believe in it, and it’s what I did as a kid growing up. It also doesn’t hurt to have the long-term opportunity to continue to make money and move the needle that way.”

Curry played AAU (Amateur Athletic Union) ball from ages 9 to 12, but didn’t feel he was getting as good as he wanted to be, so he worked with a private coach. You might think he could have simply trained with his father Dell Curry, who played 15 years in the NBA, but Curry says, “He never really coached me like that, to be honest. He wasn’t one of those drill-sergeant dads that bangs on your door and says it’s time to go to work. It was more that he told us how important it is to have a work ethic.”

Curry is using his involvement with CoachUp to get some business experience and do a little networking to prepare for the eventual day when he leaves basketball. “I’d call it leverage,” he says. “I want to leverage the success I’ve had to see what I’m interested in. I’m interested in helping youth, and in sports, so this aligns with that. I don’t know exactly what I want to do when I finish playing—maybe get into the golf world—so this could open doors in that sense.”

Gabe Kapler, who is now a player development executive with the L.A. Dodgers and has invested in a few different tech startups, puts it more succinctly: “This one really smelled like a winner.”

The flipside of former pro athletes using CoachUp—only a quarter of the coaches on the site are former pros—is people like Marisa Marcellino, who works in journalism but supplements her income by offering lacrosse coaching sessions to boys and girls in her spare time. Marcellino played women’s lacrosse at Columbia University, then coached lacrosse in England for a year with the English Lacrosse Association, and eventually got a job assistant-coaching at Gettysburg College for two years. She loved coaching a college team, but became frustrated by the stressful and high-stakes recruiting process. “It’s gotten crazy for lacrosse,” she says. “Coaching was 20% or 30% of the job, and 70% or 80% was recruiting, even at the DIII level. The parts I loved about coaching was working with a player one on one, developing skills and seeing them get it and grasp it and come to life.”

Marcellino does two or three sessions a week, for $50 an hour. (She says she saw others charging higher rates, and made hers low to court business.) “I’m very surprised how easy it’s been. It’s flexible and it allows me to have variety in my life and continue working in the sport, which is great.”

Of course, there is competition in the form of other private sports-coaching sites, like SkillzDr, to name just one. And it is unclear how much growth potential there is for a coaching site. But CoachUp dominates Google search results for private coaching, which helps it quickly turn casually-hunting parents into customers.

The company is based in Boston, and if you notice a lot of Boston names involved—a Red Sox alum, a Patriots player, a former Massachusetts politician—that’s due to Fliegel’s hometown pride. He even used a Cambridge reference to name the angel investing fund he started with a friend: It’s called Bridge Boys.