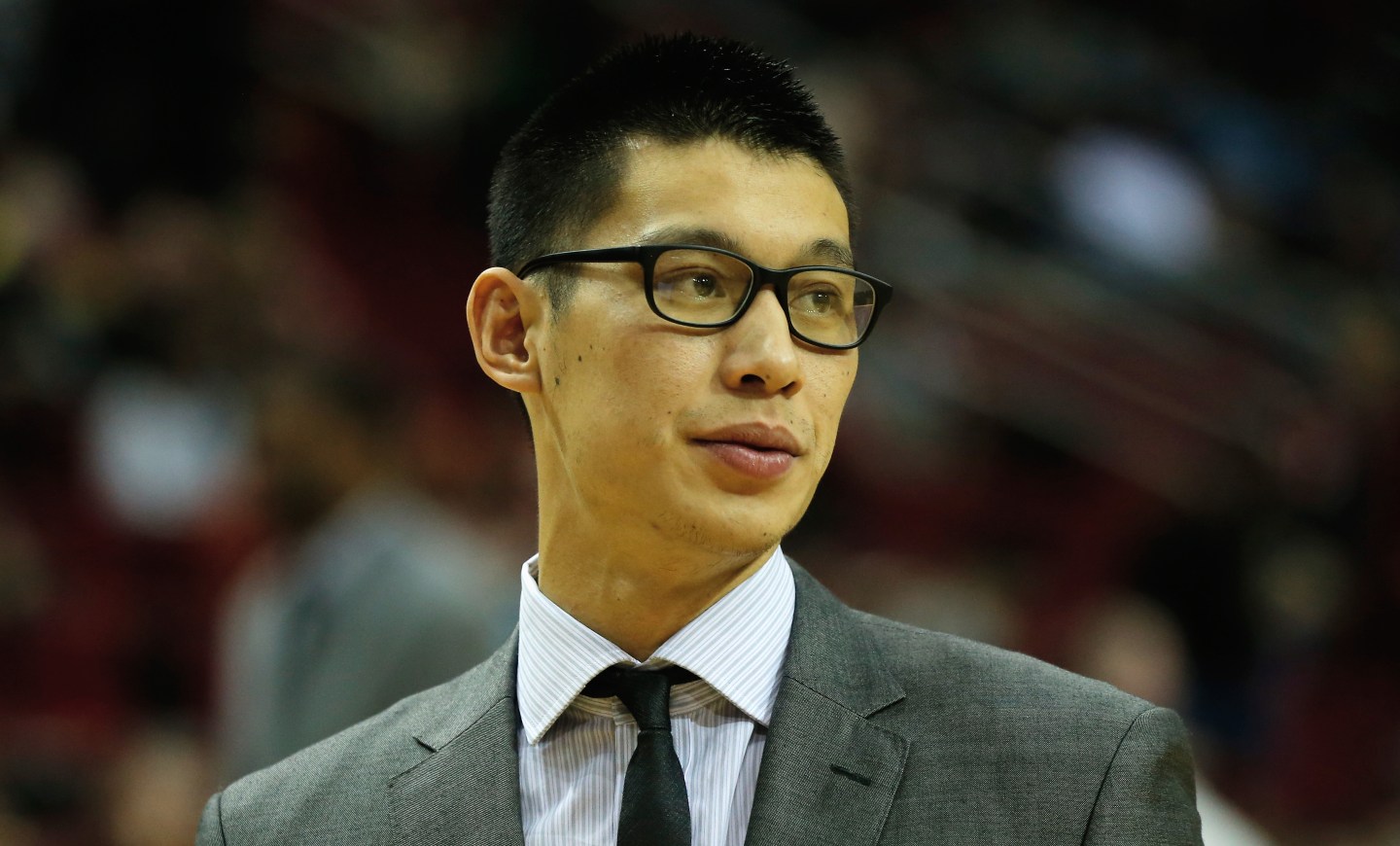 HOUSTON, TX - DECEMBER 08: Jeremy Lin #7 of the Houston Rockets during a timeout during the game against the Orlando Magic at Toyota Center on December 8, 2013 in Houston, Texas. NOTE TO USER: User expressly acknowledges and agrees that, by downloading and or using this photograph, User is consenting to the terms and conditions of the Getty Images License Agreement. (Photo by Scott Halleran/Getty Images)
Photo: Scott Halleran—Getty Images

It might surprise you that Jeremy Lin, the National Basketball Association point guard known for causing “Linsanity” among New York Knick fans in 2012, has the biggest YouTube following of any American professional athlete.

That’s a remarkable feat—until you consider that only about 30 of the world’s top 30,000 athletes have their own channel on the Google-owned video platform. Lin, with his 396,000 subscribers, sits at the top of that small group.

Having achieved (relative) social success, Lin is now preparing to hand the reins to someone else.

This week, the athlete announced a partnership with The Whistle Sports Network, a digital video platform that originated on YouTube but has since expanded to Microsoft’s Xbox gaming console and other platforms. The network, which launched at the beginning of this year, has big-name investors including Derek Jeter, the retiring New York Yankee baseball player. Lin is the first athlete in any of the four biggest American sports—NFL, MLB, NBA, NHL—to join.

Lacrosse star Paul Rabil, who is almost certainly the only pro lacrosse player to have come close to achieving mainstream fame, partnered with the video platform earlier this summer. For Rabil, it was a fresh launch—he hadn’t posted any videos of his own yet. The dynamic is different for Lin, who is relocating his existing, successful channel under the Whistle Sports Network umbrella. His subscribers will become part of Whistle Sports Network. It’s as if Whistle Sports has acquired Jeremy Lin—the online video version, anyway.

Lin’s basketball career has had its ups and downs. His breakout season three years ago gave him a dramatic fifteen minutes of fame that the press christened “Linsanity.” The team traded him anyway, and he did not quite achieve the same level of on-court success with his next team, the Houston Rockets. (He was traded to the Los Angeles Lakers in July.)

Off the court, though? Lin’s profile continues to rise. The athlete has rightly earned accolades for being one of the first athletes in the digital video space. In a phone interview with Fortune, Lin praises the influence of LeBron James. “He went from the most popular athlete to the least popular athlete back to probably the most popular athlete,” he says. “The fall? It is what it is. But for his rise, he’s handled his social media really well.” And yet James still doesn’t have his own YouTube channel. League peer Kobe Bryant? NFL quarterback Peyton Manning? Irish golfer Rory McIlroy? Nope—none of them does, either.

Lin’s videos are mostly comedic, though there is occasionally a more serious one. They mostly stay true to who the man really is. (During the rush of press coverage of “Linsanity” it became common knowledge that Lin is deeply religious. True to form, even his humor videos end with a Bible passage.) Lin knows what he offers his viewers. “With my story and my background there are a lot of different angles: Asian-American, Harvard, underdog, whatever it might be, and a lot of appeal behind it,” he says. Telling that story through video has worked for him. Teammates approach him in the locker room and ask to be in one of his videos. “Linsanity” feels like a thing of the past, but with 400,000 YouTubers paying attention, his YouTube presence could be its surest path to revival.

Lin (who sounded well-schooled in marketing-speak during his phone interview with Fortune) says the deal with Whistle Sports is a way to expand his brand and reach new audiences, and not necessarily just basketball fans. “The people who help me with my YouTube videos, from an athlete perspective I guess we’ve been somewhat groundbreaking in this space,” he says. “We did it for a couple of years and we were kind of like: How can we get better at this? How can we push this even more? Can we increase our viewership? So we wanted to find an expert network. The first digital sports network, well, we were extremely interested.”

Okay—but you can also bet that other factors helped spur the decision. First, there’s the money: Lin will reportedly get from this deal an equity stake in the company. This approach is now common among athletes that sign endorsement deals: don’t just serve as an ambassador for an upstart brand, but get ownership, too. It’s what New York Mets player David Wright did with Coca-Cola-owned Vitamin Water. It’s also what LeBron James did with Apple-owned Beats by Dr. Dre. For both, the maneuver proved lucrative.

Second, Whistle Sports will be a connector for Lin. Though it is still relatively new, it is far bigger on YouTube than he is, with 7.6 million subscribers. It has some seasoned sports-world executives behind it—one founder is a former Gatorade marketing SVP; its Europe chief was the former global head of soccer for YouTube—and associations with big names in sports. It has official partnerships with the NFL, MLB, NASCAR, MLS, and PGA Tour. (Notably, it does not yet have a deal with the NBA or NHL.) It also partnered with other YouTube channels like Dude Perfect, a crew of five guys that perform trick shots and also have a bigger following than Lin, with 3.3 million subscribers.

Notice a pattern? Professional athletes, who have long enjoyed traditional TV coverage, have been slow to hop on the digital video train. Self-made digital stars have gained comparatively fast footing.

Is Lin’s latest deal about reviving his brand? According to the man himself, it doesn’t need any help. “I don’t think I need to revive anything,” Lin says. “It’s more that we have something great going, and we’ve kind of exhausted what we’re capable of doing, and there are some things we need outside help on. What they do is exactly what we are looking for. And it’s really comprehensive, it’s not just, ‘Oh, clean up your web site,’ it goes to content, collaboration, access to a network of people, and cross-promotions with some of the endorsements I have.” Translation: Expect to see more video collaborations between Lin, Whistle Sports, and, say, Adidas, which endorses the point guard. And don’t be surprised if you see a Dude Perfect video with a Lin cameo.

“People like Jeremy and Paul [Rabil], they get it,” says Brian Selander, EVP at Whistle Sports. “They see this as a good home for them and their fans. And we want to use these great content partners to be compelling to millennials and younger audiences. We don’t want people behind a desk in a suit and tie telling you what happened, we want the athlete himself talking to the fans.”

Jeremy Lin is going to talk to fans more and more, and, no doubt, post more videos. But he’ll no longer be doing it independently.