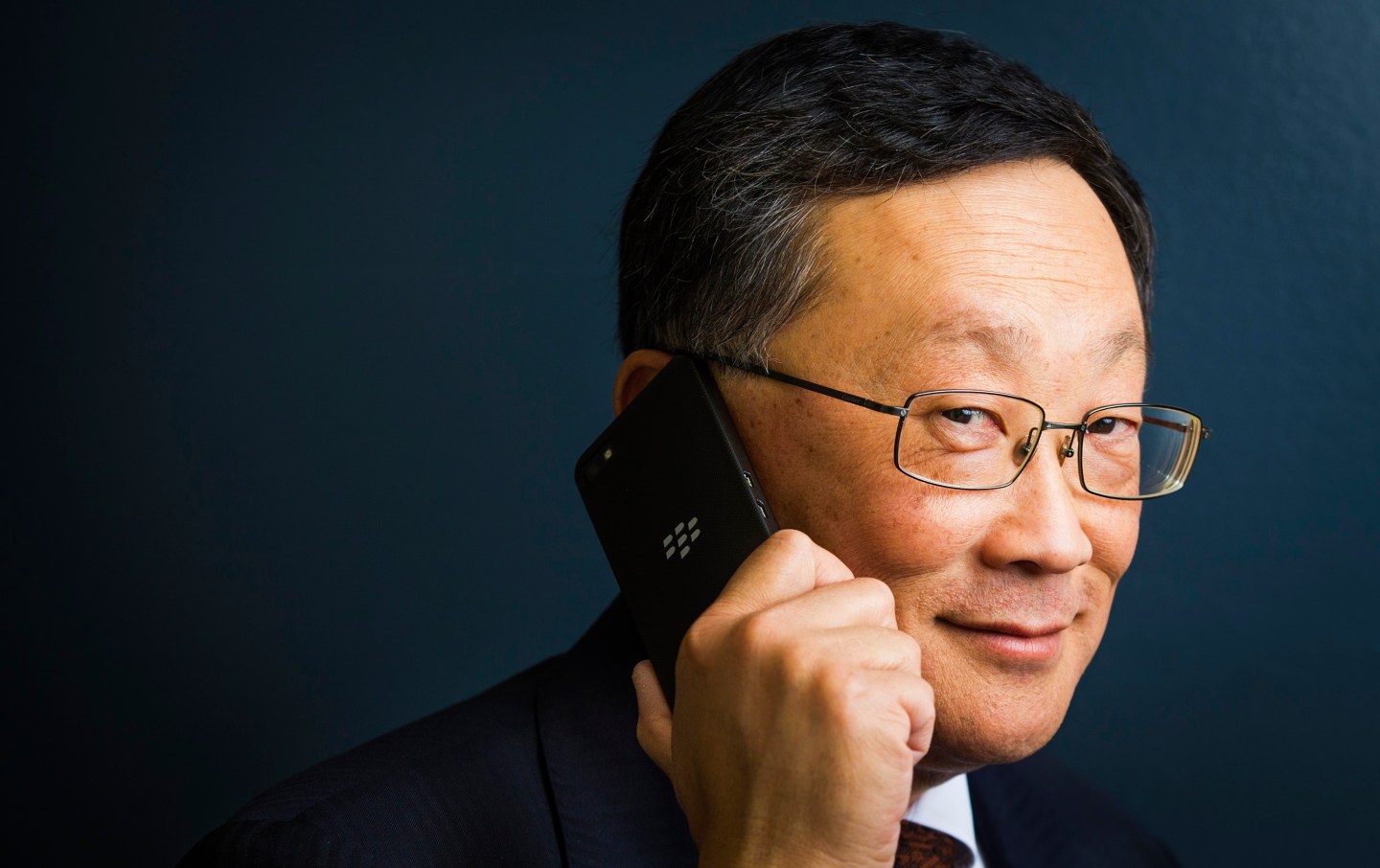 Blackberry CEO John Chen poses for a portrait in Toronto March 26, 2014. BlackBerry Ltd reported a smaller-than-expected loss on March 28, 2014 as new chief executive John Chen slashed costs, but a 64 percent drop in revenue underscored the challenge he faces in turning around the struggling smartphone maker. The Canadian company, which has lost most of the smartphone market to Apple Inc's iPhone and gadgets powered by Google Inc's Android operating system, has laid off thousands and agreed to sell most of its real estate. Chen said he expects to be cash flow positive or neutral by the end of the current fiscal year, which runs to early March 2015. He does not expect to turn a profit until sometime in the following fiscal year. Picture taken March 26, 2014. REUTERS/Mark Blinch (CANADA - Tags: BUSINESS SCIENCE TECHNOLOGY HEADSHOT) - RTR3J0YI
Photograph by Mark Blinch—Reuters

BlackBerry CEO John Chen entered the red-hot encryption debate on Thursday, writing a blog post explaining his company’s nuanced stance on whether governments or private companies should have a way to unscramble private communications to help catch criminals or terrorists.

Traditionally, one of BlackBerry’s primary selling points is that its services, such as BBM messenger and Good Technology, offer “enterprise-grade encryption.”

Chen also calls out Apple (AAPL), linking to a recent incident when the company told a federal judge in New York that it was not possible to unlock an iPhone so that law enforcement could read an accused drug dealer’s messages.

In fact, one of the world’s most powerful tech companies recently refused a lawful access request in an investigation of a known drug dealer because doing so would “substantially tarnish the brand” of the company. We are indeed in a dark place when companies put their reputations above the greater good.

Chen is taking a clear stance: If governments come to BlackBerry with lawful access requests, it will do everything it can to provide access to the content of messages it has on its servers.

However, Chen also warns federal agencies not to “overstep,” saying that BlackBerry does not use “backdoors,” or hidden code that provides a shortcut to easily access data without authorization.

BlackBerry has had to strike several different compromises on sharing its data with various governments over the past five years. In 2013, BlackBerry provided access to real-time communications to Indian officials, but in November BlackBerry completely withdrew from Pakistan because it wanted the “ability to monitor all BlackBerry Enterprise Service traffic in the country.”

The global debate over encryption has only grown louder since FBI director James Comey started to publicly call for laws last summer that require internet companies to have a key to unscramble private and encrypted communications.

Encryption has become a hot topic in the Republican presidential primary in the United States, with candidates calling for a solution to the “encryption problem.” Leaders of the Royal Canadian Mounted Police have also voiced support for new ways to quickly access subscriber information from Internet service providers.

Chen believes that’s absurd. “Frankly, it is surprising and unnerving that some national political leaders think that an encryption ban could even work on a technical basis,” Chen wrote.

BlackBerry (BBRY) will report financial results from its most recent quarter on Friday.

For more on the encryption debate, watch this Fortune video: