GOP Debate: What Republicans Got Wrong About Technology 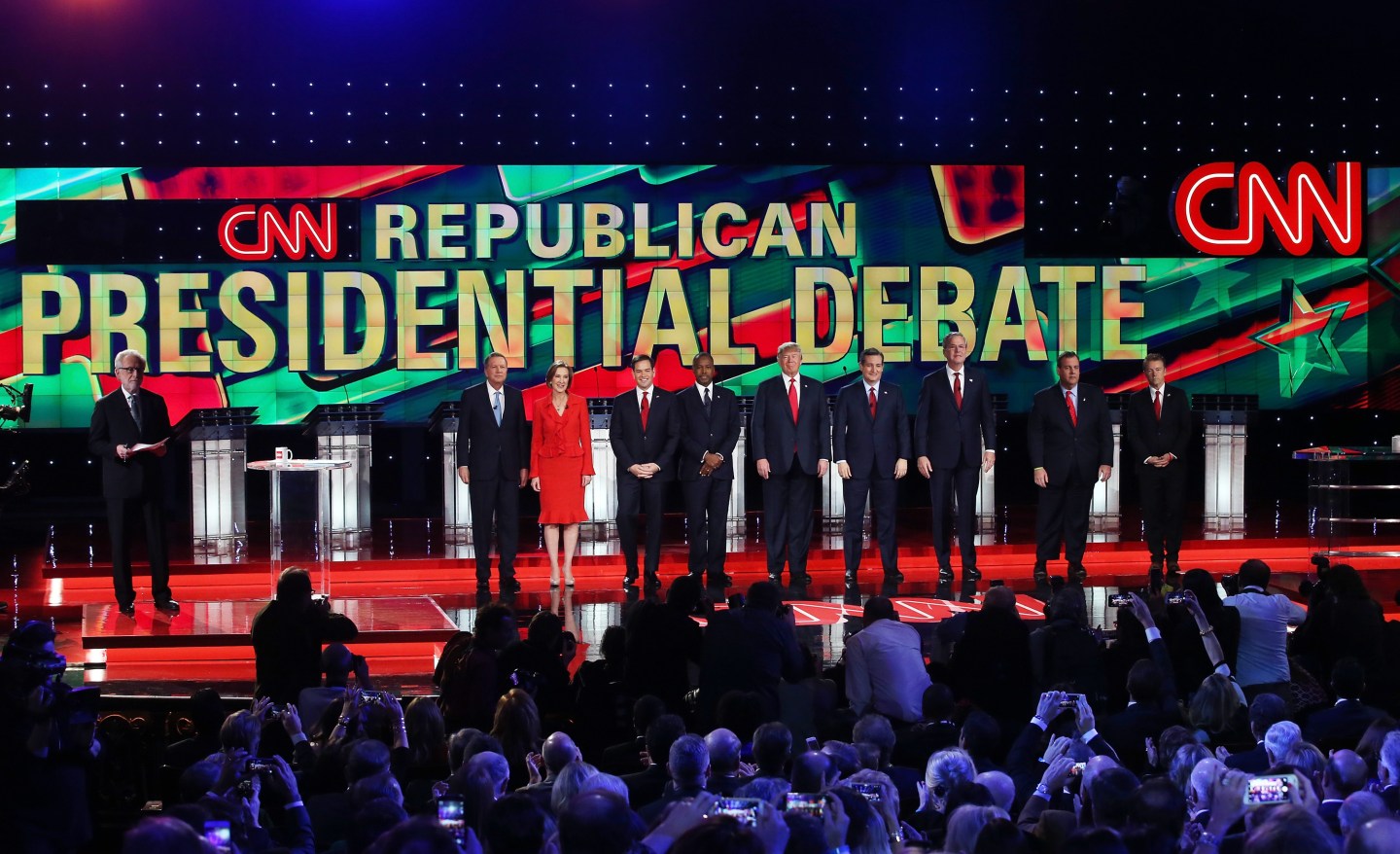 Tuesday’s Republican debate, the first since the terrorist attacks in Paris and San Bernardino, California, was focused on national security, which means the nine invited candidates ended up debating several closely-related technology issues.

One major question addressed by the candidates last night was the debate around encrypted Internet communications, or whether there’s a technical and practical way to give law enforcement the ability to decode private messages in order to detect threats from ISIS or domestic terrorists.

On one side, FBI director James Comey continues to publicly call for laws that force telecoms and internet companies to give officials a way to break encrypted phone messages using a “backdoor,” or a key that only the government or internet companies would have access to.

However, cryptography experts disagree. The Electronic Frontier Foundation believes that strong security measures are incompatible with law enforcement backdoors, and any solution to the encryption “problem” would leave businesses and individuals vulnerable to hackers. If there’s a backdoor, privacy groups argue, that means that hackers could find and use, too.

On Tuesday night, several of the Republican candidates seemed to have issues with the complicated concept. Several candidates alluded to the technology, but John Kasich was the only nominee to mention the word “encryption:”

There is a big problem. It’s called encryption. And the people in San Bernardino were communicating with people who the FBI had been watching. But because their phone was encrypted, because the intelligence officials could not see who they were talking to, it was lost. We have to solve the encryption problem. It is not easy.

However, there is no evidence that the San Bernadino shooters used encrypted communications. And civil rights groups have specifically said that looking at the technology as a “problem” is an ineffective way to address the issue. Earlier this year, the ALCU said in a comment to the United Nations that encryption is not “a problem to be solved, but a crucial tool for freedom and security.”

It’s true that the San Bernardino shooters’ phones contained encryption: nearly every device that connects to the Internet does. But there is no evidence that the two shooters used tools specifically for concealing the content of messages, and law enforcement does not have scrambled messages from the shooters that it needs the key to unlock.

Although Donald Trump didn’t mention the term “encryption” on Tuesday night, the current front-runner was responsible for introducing Internet regulation and censorship as an issue in the campaign when he told a crowd of supporters earlier this month he wants to “close that Internet up in some way” to combat ISIS.

On Tuesday, he doubled-down on his earlier statements, saying that the U.S. should have the capability “to penetrate the Internet” if government officials “use our good people.”

Later, when directly asked if he would be willing to close parts of the Internet, Trump replied that he wants to close “areas” of the Internet where the United States is at war, before answering “yes, sir, I am.”

Although Trump is correct that ISIS does effectively use the web to communicate and even recruit new members, there is no such thing as an “area” of the Internet, and it’s not clear what “penetrating” the Internet would entail. Perhaps Trump is advocating for American technology companies, like Google or Facebook, to cease offering services in countries such as Syria.

Trump’s stance has been compared to Senator Ted Stevens’ infamous 2006 description of the Internet as a “series of tubes.”

Later in the evening, Kasich echoed Trump’s call to “penetrate the Internet.”

We need to be able to penetrate these people when they are involved in these plots and these plans. And we have to give the local authorities the ability to penetrate, to disrupt.

Carly Fiorina is notable among Republican candidates for having a background in technology, having been the CEO of Hewlett-Packard from 1999 to 2005. Naturally, she believes the private sector should be a core part of the balance between national security and internet privacy. “They do not need to be forced. They need to be asked to bring the best and brightest, the most recent technology to the table,” Fiorina said.

When directly asked for her Silicon Valley perspective on encrypted communication, Fiorina dodged the question, instead pointing to recent reports that the Department of Homeland Security missed a Facebook post by one of the San Bernardino shooters’ Facebook post supporting ISIS, even though DHS does have the legal ability to look at social media accounts.

Fiorina also said that one reason that law enforcement missed the attacks was because the U.S. was using “the wrong algorithms.” She could be arguing that the government doesn’t use the kind of sophisticated data mining techniques increasingly used by technology companies. “This is a place where the private sector could be helpful because the government is woefully behind the technology curve,” Fiorina said.

The candidate who displayed the most sophisticated understanding of technology on Tuesday, Rand Paul, is currently polling at 2%, according to the most recent ABC News poll.

Paul focused on the infeasibility of Trump’s plan to monitor and shut down parts of the Internet.

The next Republican debate is scheduled for January 14, 2016 Perhaps by then we’ll learn more about Trump’s plan to “penetrate the Internet.”

Miss the debate? Catch up with this Fortune video: