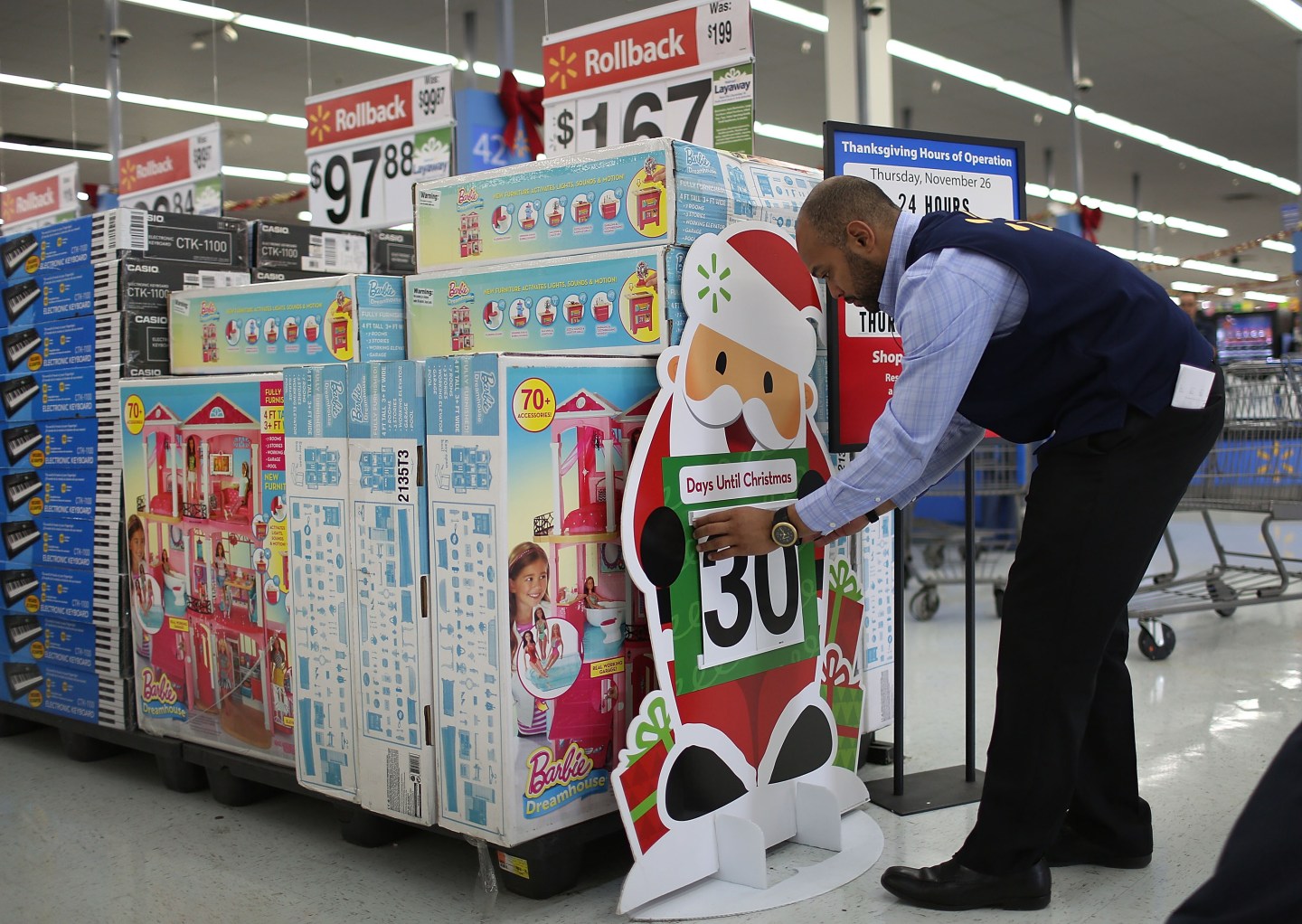 MIAMI, FL - NOVEMBER 24: Jonathan Mary fixes the sign indicating that there are 30 more days until Christmas at a Walmart store as they prepare for Black Friday shoppers on November 24, 2015 in Miami, Florida. Black Friday, which is the day after Thanksgiving, is known as the first day of the Christmas shopping season and most retailers offer special deals on the day. (Photo by Joe Raedle/Getty Images)
Photograph by Joe Raedle—Getty Images

There’s been a lot of talk about the growing irrelevance of Black Friday as a shopping event.

Chain stores in the United States are in the thick of Thanksgiving/Black Friday weekend, a four-day period that generates about 15% of holiday season sales and is the single biggest shopping event of the Christmas period.

But with retailers from Walmart (WMT) and Target (WMT) to Best Buy (BBY) to Amazon.com (AMZN) offering deals online earlier in November, and reports last year of big sales declines over that holiday weekend, many commentators have suggested the annual rush to stores after turkey dinner has become a cultural relic.

Yet there were, as usual, throngs of shoppers at malls across the country according to analysts Fortune spoke to. Target said in a press release early Friday that in-store traffic had been “strong.” And there were healthy crowds at shopping centers and malls Fortune visited Thursday evening in Jersey City and in Manhattan.

Of course, one can’t draw any conclusions based on visits to a few stores at any one time of day. But all indications were of a good start to the weekend.

“I don’t know why people think Black Friday is dying or not as important as it used to be because there’s no evidence to support that,” Gerald Storch, CEO of HBC, told Fortune in an interview. On the contrary, people were lining up for cosmetics and $39.99 cashmere sweaters, among other items. And like many of his peers, Storch saw a lot of customers moving seamlessly between e-commerce and in-store sales.

In fact, analysts and retailers agree that the interplay of stores and e-commerce is essential to keeping stores front and center of the shopping experience, even, and perhaps especially, on Black Friday.

Target, which has equipped hundreds of stores to help ship items and to facilitate pick-up of online orders, said that by 6 p.m. on Thanksgiving, the number of orders placed for pick-up was up 35% from a year earlier.

And Target CEO Brian Cornell told reporters Thursday evening that the ability to use stores to ship items more quickly so shoppers could get their orders as early as Saturday was invaluable.

These efforts by traditional retailers to be ‘omni-channel’, seamlessly interweaving stores and online, has been a long time coming and is key to fending off Amazon.com (AMZN). The online only retailer saw sales rise 30%-plus on Thursday, according to initial data from ChannelAdvisor, meaning the threat is clear and present.

“The fact that retailers offered Black Friday specials online as well is meaningful,” said Charlie O’Shea, a senior analysts with Moody’s. “Retailers have to be agnostic.” And that’s because their shoppers are, even on Black Friday.

“There were a number of customers last night who’d already shopped online, had made purchases, and were now in stores picking up other things,” Bratspies said. “We never differentiate between the two as long as they choose Walmart. And we think they did that.”

At a J.C. Penney store in Newport Center in Jersey City, N.J., the longest line Fortune saw on Thursday evening was at the in-store pick-up counter.

Kohl’s (KSS) CEO Kevin Mansell told Fortune in an interview that his company enjoyed its two biggest online days ever this year, and credited efforts like introducing a better app and being able to ship online orders from stores, among other way of integrating the digital with the physical.

“You need it more than ever. That’s what the customer expects, ” said Mansell of the integration in ways of shopping.

So top executives in retail are eager to put to rest the idea that digital sales cannibalize in store sales.

“It hasn’t hurt it all. Black Friday is still a big event,” Mansell said.