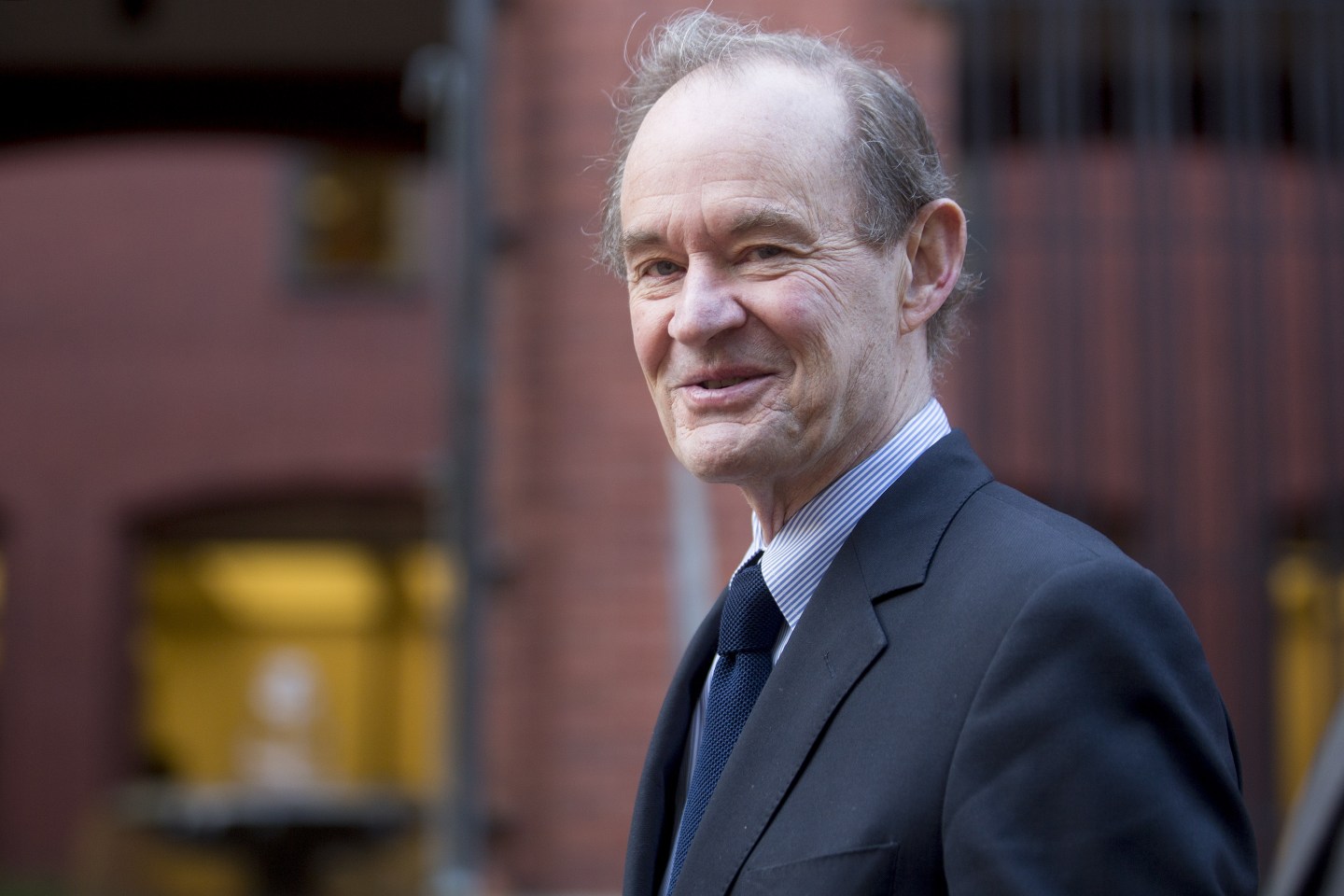 David Boies, chairman of Boies Schiller & Flexner LLP and attorney for Maurice "Hank" Greenberg's Starr International Co., arrives to the U.S. Court of Federal Claims in Washington, D.C., U.S., on Tuesday, Oct. 7, 2014. Former Treasury Secretary Henry Paulson, testifying in a trial over claims by Greenberg's Starr International Co. that the government illegally took equity in AIG, said yesterday that regulators wanted to send a message to markets that government help would cost them. Timothy Geithner, the head of the Federal Reserve Bank of New York in 2008, was cited in earlier testimony as being responsible for setting what a Starr lawyer called "an extortion rate" of 14 percent. Photographer: Andrew Harrer/Bloomberg via Getty Images
Photograph by Andrew Harrer — Bloomberg via Getty Images

On the day before Thanksgiving, DraftKings and FanDuel will meet the New York Attorney General in court for a dramatic showdown. And DraftKings outside legal counsel David Boies, in an exclusive interview with Fortune, says he believes the facts are clearly on their side. “We look very strong.”

Two weeks ago, Attorney General Eric Schneiderman ordered DraftKings and FanDuel to stop accepting paid contest entries in the state of New York. It was a major threat to the future of the exploding daily fantasy sports industry, and it led a number of smaller daily fantasy sports operators, who were not sent any letter from Schneiderman, to promptly cease business in New York. The state is the biggest market for the two companies, and DraftKings and FanDuel fought back by filing their own lawsuits against Schneiderman. (He has since added Yahoo, which launched a daily fantasy platform this year, to his inquiry via subpoena.)

On Nov. 25, New York Supreme Court justice Manuel Mendez will adjudicate a one-hour hearing that may prove to be the most pivotal moment in this industry’s early history. Schneiderman, DraftKings, and FanDuel will each have only 20 minutes to present to the judge, but the burden of proof is on Schneiderman to show that DraftKings and FanDuel’s contests are illegal under New York law.

The gambling law in New York is matched in just eight other states: a contest is gambling if the outcome depends on a “material degree” of “the element of chance,” as opposed to skill. DraftKings and FanDuel have always argued their contests are “games of skill,” but Schneiderman doesn’t buy it. The Attorney General did not merely label them gambling operators—as Nevada’s Gaming Control Board ruled last month, offering the companies the chance to apply for gambling licenses—but accused them of being “the leaders of a massive, multi-billion-dollar scheme intended to evade the law and fleece sports fans across the country.”

To fight this claim, both companies lawyered up. DraftKings’ legal hires included Boies, a prominent litigator who, among many high-profile cases, represented the U.S. Justice Department in its case against Microsoft (he won), American Express against MasterCard and Visa (he won), and Al Gore against George W. Bush (he lost).

At the hearing, Boies will argue that DraftKings has operated legally since its launch in 2012 and that Schneiderman has “misinterpreted New York gambling law,” he said on a press call with reporters last week. Boies draws a careful distinction between daily fantasy sports and poker, though many people who play both don’t see such a big difference. And he firmly believes DraftKings should be able to keep operating in New York. (Boies is a rather busy hired gun right now; he’s also working with embattled biotech startup Theranos.)

Boies spoke directly with Fortune by phone on Monday night about the highly-anticipated New York hearing. What follows is an edited transcript.

Fortune: Do you worry that with the legal scrutiny and all the press, the tide of public opinion may be turning negative? Does that affect the hearing at all?

David Boies: What’s written in the press can affect what happens in court. But my experience is that’s generally unlikely to happen. It is particularly unlikely with a judge rather than a jury. I think the judge will look at the law and look at the facts. And I think he will disregard a lot of the stuff that is in the Attorney General’s papers. For example, the Attorney General has spent a lot of time talking about what people say in chat rooms and colloquial uses of the term gambling, whether this is gambling under Nevada law… none of that matters. What matters is not whether this is gambling as people might define it in conversation, or even gambling under the law of some other state. What matters is whether this is illegal gambling under New York law, and New York law is crystal clear that in order to be gambling, you must have someone that bets on a contest of chance where the person betting does not have “control or influence” over the outcome.

There are two reasons under New York law why DraftKings customers are not gambling. First, neither the entry fee they pay, nor the prize that is rewarded, is determined based on an outcome. They pay a fixed entry fee to compete for a fixed prize. In other words, DraftKings does not stake or risk anything, and the player doesn’t stake or risk anything. They pay a fixed fee, and either win or don’t win a prize. Second, even if this were a bet, it would be a bet on a contest of skill, the outcome of which the DFS player clearly influences.

The Attorney General has to prove daily fantasy sports involves a “material amount” of chance. Even if DraftKings and FanDuel contests are “predominantly skill,” isn’t there a significant amount of chance involved when we’re talking about predicting how a football player will perform?

Material is the key. And material ordinarily means an amount that affects the outcome. But New York courts have actually interpreted “material degree” of chance to mean that chance has to be the predominant factor. So in our papers we filed, we quote cases that talk about predominance. Even if you didn’t have those cases, the very evidence that the Attorney General relies on for his advertising claim is that he says DraftKings suggests in its advertising that anyone can win and that’s not true because about 1% of players win a majority of the prizes. That can only happen if skill is determinant. The same people win repeatedly. That can’t happen if there’s a material degree of chance.

Isn’t there a major contradiction here for DraftKings? On one hand, it’s using the fact that the same people always win to argue for legality, but in its marketing it is also telling potential new users, “Anyone can win.”

Well, how many people want to play a game that is so determined by skill? I happen to think a lot of them do. My son plays this game, and he really likes how it pushes him and how he spends time and effort on it.

I think it is important the advertising be accurate, we’ve always said that. And one of the things we’ve always said is that if there are questions about the advertising, we will sit down and address them, and that’s what we’re doing right now in Massachusetts. And we were doing that in New York with the Attorney General for five weeks. And throughout those conversations, there was never a hint from the Attorney General’s office that what we were doing was illegal gambling.

Something that does not get enough emphasis is that this activity has gone on for eight years and everyone has always believed it was legal. To change the rules now, after so many people have made this investment, is wrong. If there’s going to be a change in law, it should come from the legislature, not from a single prosecutor.

Is that really the strongest argument—that it’s been around a while without being bothered? Lots of things exist for a while unbothered by the law until someone cracks down, whether it’s a certain drug, or, for example, people using bitcoin for illegal purposes.

The thing that’s different here is that buying drugs has always been unlawful. Using bitcoin to buy drugs has always been unlawful. You might figure out that bitcoins are being used to buy drugs and you can now prove it, but that’s entirely different from changing the law. People find out facts that allow them to target something. It took people a long time to learn that Enron was a fraud. But that doesn’t mean a change in the law. What happened here is not that someone is saying he just found out new facts, but basically that he just found a new law.

If you lose and DraftKings and FanDuel are made illegal in New York, do you fear a ripple effect elsewhere; will other states follow?

As a legal matter, it is pretty much specific to New York. But of course you’ve got to recognize that any time a state, particularly a state as important as New York, takes an action to shut a business down, that’s going to have an effect on the business nationally. So the ruling would have business repercussions.

The hearing will only be one hour, with DraftKings getting 20 minutes to make a case. Does that short time limit hurt you?

Yes, the time is one hour. It is a very short amount of time. And one of the problems is that the judge is currently on trial in another case, so he doesn’t really have a lot of time. He may say, “Come back next week for a day or two.” He has the option, if he wants it, of further hearings.

The burden of proof is on the Attorney General—does that make it easier for you?

Yes, that makes it a lot harder on him. I don’t think he can meet that burden. A real significant possibility is that the judge says, “I can’t decide this, I need to have a full trial. I need to hear from witnesses.” Right now we’re both just putting in affidavits. and those are written by people the parties have chosen, so they advocate one side or the other, and there’s no cross examination. I think the judge might want to hear witnesses and see them cross-examined.

Would a trial make it easier or harder for you?

A trial makes it much easier for us. In a trial, all these declarations the Attorney General is putting in from people that make conclusions with no evidence, you can really point all that out on cross examination. So I think a trial is much easier for us to win.

Do you expect to get a resolution on the hearing on Wednesday?

That is really hard to predict. If I had to guess, my guess would be probably not. But this is something that we don’t have “control or influence” over. [Author’s note: See what he did there?]

Do you feel confident?

We certainly have the facts and the law on our side. We feel good about the position we’re in. I think we look very strong. I’d rather have our hand than the Attorney General’s hand.

For more on daily fantasy sports, check out the following Fortune video: