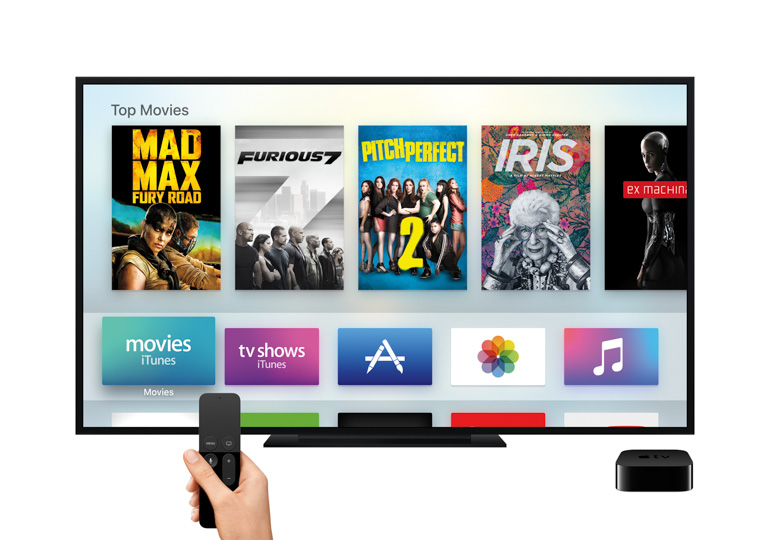 Apple (AAPL) has placed high expectations on its latest product, the fourth-generation Apple TV. The streaming media device provides users with a means to play movies and TV shows from the likes of Netflix and Hulu, much in the same way previous iterations have done.

With this release, however, Apple has added an App Store and provided developers with tools to create applications. Apple has also added its personal assistant, Siri, into the mix via a dedicated button on a redesigned remote that features a trackpad instead of directional buttons for navigation.

The new Apple TV comes in two configurations, $149 for 32 gigabytes of storage, doubling to 64 gigabytes for $199. Inside the box you’ll find the Apple TV, a Siri remote, a Lightning cable (to charge the remote), and power cable.

Unlike recent updates by Roku and Amazon to their respective streaming devices, Apple opted to not include 4K streaming capabilities, sticking with 1080p high definition video instead. For those with 4K TV’s, this will be a disappointment. But for the vast majority who don’t yet own a 4K TV, it’s a non-issue.

Initial setup was a breeze. After first powering on the Apple TV, I was instructed to unlock my iPhone and place it close to the unit. Doing so allowed my phone and the Apple TV to begin the setup process, first transferring my Wi-Fi network’s credentials to the set-top box.

A few seconds later, my phone prompted me to enter my iCloud credentials and verify my Apple ID. I then had to indicate whether or not I wanted to use Siri, and answer a few more standard setup questions. All in all, total time from unboxing to installing apps from the App Store was less than five minutes.

On previous generation Apple TVs, users were forced to wade through a grid of app icons and streaming services by default. As Apple added new services to those Apple TV models, it would litter users’ home screen with app icons, regardless of whether or not the user wanted them.

Thankfully, Apple changed this approach with the latest device, allowing users to pick and choose which service providers are installed on each device, by downloading the apps from the App Store. The only software installed upon initial boot up of the Apple TV are Apple’s own apps.

Navigating the interface with the new Siri Remote involves a trackpad located atop the remote that responds to gestures. For example, swiping your thumb across the pad will highlight various elements such as buttons or movie posters.

A dedicated button on the remote activates Siri. Using your voice, you can ask Siri to search for movies or TV shows based on genres, actors, or specifically by name. A command of “Show me Nicolas Cage movies” returns a list of movies featuring the actor.

Selecting a movie will open its detail screen, providing a synopsis and various tidbits of information about the movie. More importantly, however, is that Apple TV will now display a list of service providers where you can find the movie instead of forcing you to search Netflix, then Hulu, then HBO, and so on, in order to find what you want to watch. For example, searching for The Wolf on Wall Street gave me the option to watch it on Hulu or purchase it from iTunes. The feature is called universal search, and is something Apple’s competitors have long offered.

As far as Siri’s accuracy is concerned, I’d put the experience on par with that found on the iPhone. The vast majority of the time Siri properly dictated my requests, struggling the most when I used the nickname “Avs” to refer to NHL team Colorado Avalanche, returning score updates for the Cleveland Cavaliers (aka, the Cavs) instead.

Games will end up being a cornerstone of the new Apple TV experience. In the past five days, I’ve spent as much time playing games as I have watching TV, which almost never happens. The reason? Playing games on your TV turns what would normally be a singular experience into a social activity.

For instance, instead of sitting on the couch with each person in the room playing a game like Crossyroad on his or her smartphone (and then comparing scores), you find yourself cheering (or jeering) one another as each person attempts to one-up the high score.

Sketchparty TV is another app I’ve grown fond of. It’s like Pictionary, only instead of using a whiteboard, players can privately read the word on an Apple TV-linked iOS device, which then doubles as a handheld drawing surface. Connecting the Apple TV to the iOS device only takes a few seconds. The iOS Sketchparty app looks for Apple TVs on the same network running the Sketchparty companion app. Once they find each other, the game is on. One evening, I spent three hours with a large group of friends drawing and laughing the night away. It was a blast.

The Apple TV may not be able to compete with Microsoft’s Xbox or Sony’s Playstation as a dedicated gaming console, but it does provide an exceptional casual—and very entertaining—gaming experience.

There’s no other way to say it: Finding and installing apps on the Apple TV is a mess. In its current state, the App Store has two main categories: games and entertainment. The addition of categories occurred late Wednesday, some five days after the device launched. The ability to add categories and aide in app discoverability without requiring a software update is promising, and something Apple needs to continue doing.

You’re able to search for apps, but that is assuming you know what you’re looking for. If an app isn’t featured by Apple or successful enough to be placed on the top charts, odds are you won’t have any clue it exists.

Further complicating the problem is that developers cannot link to their Apple TV apps. When a company announces an app built for the iPhone, you can click on a link and view details in iTunes or the App Store. Apple TV apps have no such option, with developers having to instruct potential users to search the App Store for the app’s name.

Ideally, iTunes would give users the option to remotely install any compatible apps on the Apple TV. This is something Google has done with the Play Store for Android devices for years—and it’s time that Apple follows suit.

Text entry is a hassle

While we’re on the subject of the App Store’s shortcomings, let’s talk about the biggest issue with the Apple TV in its current state: text entry.

Entering user names and passwords is downright tedious. So much so, in fact, I’ve declined to completely set up some apps, in order to avoid it.

Right now, you have to scroll through a horizontal list of letters and numbers and select each one individually using the Siri remote when signing into apps or searching the App store. In other words, if a text field requires input (outside of the initial setup process), you’re going to have to suffer through filling it out.

Adding to the frustration, Apple has yet to update its companion iOS Remote app for the Apple TV. With previous generation units, the Remote app lets you use the keyboard on your iPhone or iPad to input text. Considering the amount of time I’ve wasted entering passwords over the past few days, that update cannot come fast enough.

In its current from, the Apple TV is far from perfect. The App Store is in disarray, and having to enter passwords using the Siri remote is an exercise in frustration. Even if a developer has figured out what the next big thing will be on our TV’s, odds are we’d have no idea it existed in the App Store.

Yet despite its flaws, the new Apple TV is a respectable upgrade from older generation units. The addition of the App Store, current limitations notwithstanding, has already added to the overall experience and will continue to add value over time.

Siri’s presence on the big screen isn’t an earth shattering revelation. But it is one that helps streamline the process of finding something to watch across multiple services much easier than on previous Apple TVs.

Apple’s vision of the future of TV, one that’s powered by apps and empowering users through choice, is far from being realized—if it ever is.

Right now, the new Apple TV has added an element of fun, mixed with entertainment to my living room. And that’s all I can ask for.

For more about Apple TV, watch this Fortune video: