Does the bear case against Apple make any sense at all? 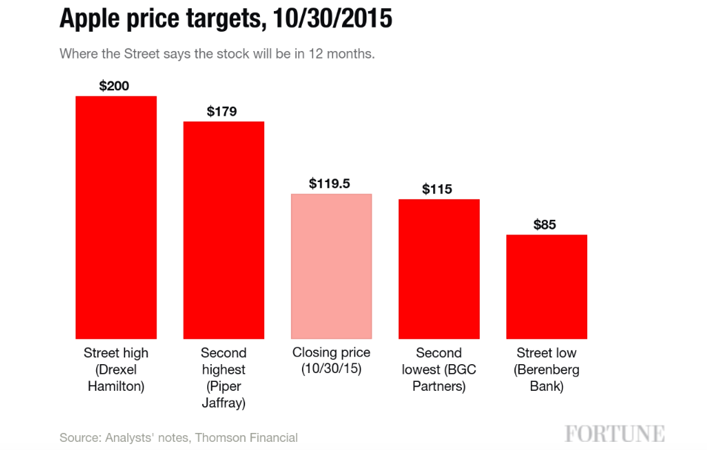 At least three dozen Apple analysts have told their clients to expect the company’s shares to be worth more a year from now than they are today. (See spreadsheet, below). The Street’s average 12-month price target for Apple is roughly $150. The highest target, set by Brian White at Drexel Hamilton, is $200. Right behind him is Piper Jaffray’s Gene Munster at $179.

Gillis and Ahmad are outliers, as a glance at the spreadsheet below will tell you.

But I’d like to understand their point of view. Because with the stock trading at $119.50 a share—$4.50 more than Gillis’ price target and $80.50 less than White’s—the bear case seems to be carrying the day.

Gillis’ most recent note tells a good news/bad news story that makes a certain amount of sense. iPhone sales are up, especially in China, but iPhone growth is slowing. Which is why, Gillis says, the stock has been stalled for the past three months. His price target is lower than, say, Munsters’, because Gillis values Apple at 12 times projected earnings while Munster is using a multiple of 19.

Ahmad’s most recent effort, “Apple: ticking time bomb,” makes no sense at all. At least to me. Except for the 10X multiple Ahmad uses to get to $85 a share, his note to clients is virtually analysis-free. What he offers instead are assertions. Among them (I quote):

—[Apple] is a one-product company, and this product has run out of steam or will do very soon.

—The Watch has been a disaster relative to lofty expectations.

—Music, Pay and TV did not move the needle.

—The iPad Pro at $1,000 with “pencil” and keyboard is just not going to make a difference, in our view.

“It is incredible how myopic the market is being with respect to Apple,” Ahmad says near the top of the note, apparently frustrated that the stock hasn’t fallen below $92 in the past 12 months. Seven paragraphs later, he arrives at this:

“For Apple, Mr Market is questioning volumes and growth at the moment. That is why the momentum only has left the building. The issue for value investors is that when mix and ASP start being questioned, then it is natural to bring in gross margin developments. Like Nokia in the 2000s, Apple will probably cut opex, but like Nokia’s stock, Mr Market will not be fooled. That is when the value guys will leave the building and Apple’s stock will be well and truly crushed as the ‘consumer electronics’ label will replace ecosystem/stickiness/recurring revenues.”

I’ve read that paragraph a dozen times, and it doesn’t make any more sense the 12th time than it did the first.

“We have ranted on here a bit,” Ahmad concludes, “but as we have said before, it is about the tech law of large numbers, which is why the bulls are hanging onto the iCar.”

Ah. I should have known. That pesky law of large numbers. This may be what passes for analysis at Joh. Berenberg, Gossler & Co., the world’s fifth oldest bank (in partnership since 1590).

But if this is where Mr. Market is getting his Apple advice, we’re all in trouble.

Below: The current price targets, as up-to-date and accurate as I can make them. Corrections appreciated.