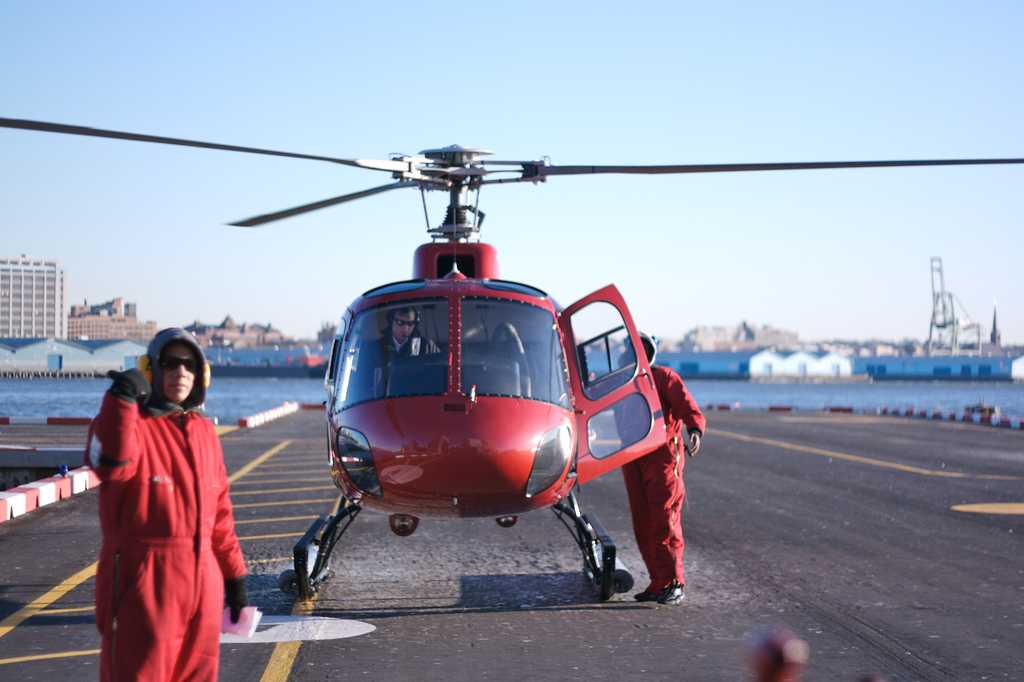 We’ve all dreamed, while stuck in a creeping flow of traffic, of soaring above it all. Since 2013, Uber has been occasionally testing UberChopper, a service that helps make those daydreams a reality—and there are new hints that it may be expanding.

In big cities, helicopters have long been an option for those willing to shell out a few hundred dollars a ride to skip traffic. But only some of the barriers are financial—finding a helicopter operator and scheduling a flight is also a pretty daunting proposition.

As with the landbound side of its business, Uber’s helicopter service coordinates with those independent operators and provides smooth scheduling and billing, as well as connecting car services. Being able to use your smartphone to summon a helicopter to the nearest helipad (there are a surprising number in big cities) could make flight a bigger part of urban transportation, just by making it more convenient.

So far, though, UberChopper has been limited to big events that create particularly heinous traffic. (In New York, the helicopter-sharing service Blade is one step ahead of Uber, offering regular app-based helicopter pooling. It’s expanding its routes, but hasn’t yet released details.)

Leandre Johns, Uber’s North and West Texas general manager, gave the area its first taste of UberChopper during this year’s college football championship game at Arlington’s AT&T Stadium. The flights left from Love Field, a quiet commercial airport, and landed at a hotel helipad near the game. Uber cars also ferried passengers at each end. The whole package was $350 per person.

As a splurge for a special event, that price point could make sense for a surprising number of Americans. If you’re already paying $750 for a ticket (a rough average of the market for the big game), another three bills to get there well-rested and return safely buzzed might not be a stretch. Johns said that while there were fewer than 20 takers for those first flights, the number nearly tripled for his region’s second UberChopper offering, at April’s American Country Music Awards. He’s fielded several requests to provide the service to other events.

Johns does admit UberChopper is about slightly more than convenience: “There’s also a wow factor associated with it.” The service debuted in 2013 by offering vacationers rides from New York City to the Hamptons, and has since been offered for events like the Cannes Film Festival and Coachella, reinforcing the tinge of excess.

MORE: Here’s how you can avoid Uber surge pricing

But it’s in the megacities of the developing world that UberChopper could offer both a more integral daily service—and a more troubling symbol. In early October, Mexican government officials (apparently getting slightly ahead of Uber itself) announced that UberChopper would launch in the capital, with the implication that it would offer more regular service. UberChopper also demoed in Shanghai earlier this year.

These and similar cities have ridden huge economic booms in recent decades. Their expanding middle classes bought cars faster than infrastructure could adjust, leading to a sharp uptick in urban gridlock worldwide. At the top end, meanwhile, the same growth has swollen the ranks of the very wealthy—and impatient.

The best (or worst) example may be Sao Paulo, Brazil, where almost unimaginably dysfunctional traffic has helped make helicopters a regular part of the day for some of the wealthiest residents. If UberChopper could make their experience smoother and more efficient, there’s clearly money on the table.

Nice work if you can get it—but the fact that commuting by helicopter is even part of the discussion may point less to exciting new possibilities than growing problems.

“Are we creating two-tiered transportation systems?” asks Dr. Susan Shaheen, a researcher at UC Berkeley who has spent two decades studying car sharing and smart transportation. “When you have the ability to create these services, does it . . . create a gulf between existing services and the newer ones?”

That’s a particularly acute question in Mexico and Brazil, which have among the world’s highest levels of inequality.

Even in the U.S., UberChopper is inevitably wrapped up in the inequality debate. It has been blasted in the press, and Shaheen compares it to the Google shuttles that have roiled San Francisco.

But those complaints may be missing the bigger picture—with traffic getting worse worldwide, people are going to extreme measures to find solutions.

“People’s time has a lot of value,” admits Shaheen. “I actually have colleagues who fly [their own] planes to get from San Jose to the East Bay. And these are not people who are Donald Trump-like at all.”

“At first I was like, ‘Are you kidding me?’,” says Shaheen. “[But] I would never drive from the Easy Bay down the 101 corridor to get to Mountain View, every day. I’d be a nervous wreck.”

For more Fortune coverage of Uber, watch this video: