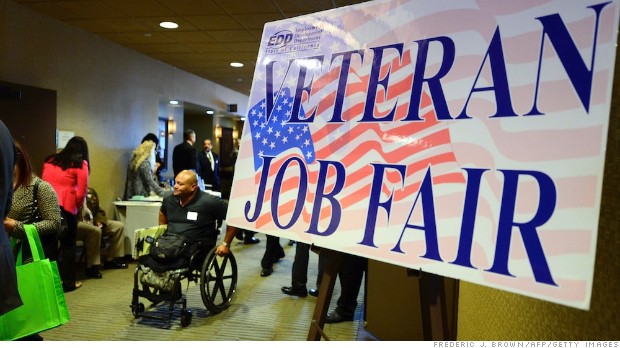 Anthony Teasley, a veteran of nine years in the Marines only to have lost his legs when he finished in an auto accident, attends the annual "Honor a Hero - Hire a Vet" job resource fair in Van Nuys, California, on October 24, 2013. The US jobless rate fell to 7.2 percent in September from 7.3 percent the month before, but job creation remained sluggish, the Labor Department reported on October 22. AFP PHOTO/Frederic J. BROWN (Photo credit should read FREDERIC J. BROWN/AFP/Getty Images)

Companies love to pay lip service to hiring veterans, but post-9/11 service members have a higher unemployment rate (7.3%) than the rest of the population (6%). And that’s despite the government embarking on a veteran hiring spree—33% of all Federal civilian hires in fiscal 2014. Private companies still aren’t quite doing their share, which is surprising given that the benefits of hiring service members have been well-chronicled. One elegant example of that is the new book Charlie Mike: A True Story of Heroes who Brought their Mission Home, by Joe Klein, which tells the remarkable story of two veterans who made it a mission to help other service members in their new lives and jobs as civilians. Klein is a Time columnist and author of seven books, including Primary Colors. Here, he answers a few of Fortune’s questions about his latest release.

Fortune: What does “Charlie Mike” Mean?

Why write this book?

Two reasons. First, I don’t believe enough has been said about veterans as assets—potential leaders—rather than liabilities. Second, I think we’ve got a lot to learn from the military about leadership, citizenship and community.

How are businesses in the U.S. responding to veterans? Does corporate America need to do more?

It’s spotty. Some companies have excellent records; others seem afraid of hiring veterans.

The Veterans on Wall Street program is one of the largest such organizations that I know of. Does that make sense as a model? Should there be more? Or should they follow a different format?

When I embedded with the troops, particularly in Afghanistan, I saw that counterinsurgency strategy required new skills from our troops. It’s no longer salute and charge the hill.It’s now problem-solving, governing or, as General Petraeus says, “Making moral decisions on the basis of incomplete information under fire.” Watching our troops in action, I thought these new skills pointed them in two directions—toward entrepreneurialism and public service. So it doesn’t surprise me that the Wall Street veterans community is very active.

What can military members contribute to workplaces?

Leadership and a sense of larger purpose. They are used to being part of a team. Indeed, one of the things that they miss most about military life is the feeling of shared purpose.

Are there challenges that come along with the benefits of hiring service members?

Depends on the service member. I am vehemently opposed to the notion that veteran=emotional basket case. Obviously, some people do have problems but the Iraq-Afghanistan generation has been unique in its ability to create support groups to help one another.

What do you want people to take away from this book? Is there one element or story or character that’s particularly important?

Well, first of all: I hope people find it a compelling read. It’s the story of two extraordinary young men linked by a tragedy. But I also hope that people will be inspired by their example, and by the notion of service as an integral part of citizenship.

What needs to change about the way the U.S. addresses veterans issues, and how can the average American help?

More people need to serve, in some way or other—serious service, a full time commitment that involves personal sacrifice. Teach for America is a great example. There are others. But it’s really hard to have a democracy without citizens—and citizenship can’t be a passive thing. I think that when we’re all Veterans of some sort of service, military vets won’t feel as isolated. And, for the veterans themselves, we’re learning that one great way to treat the isolation and trauma they’ve been feeling, is to Charlie Mike—continue the mission, join together with other veterans in organizations like Team Rubicon and The Mission Continues, to help others less fortunate than themselves. It really works.