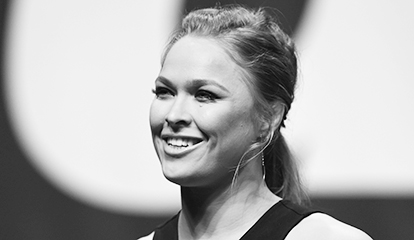 This week Fortune revealed our brand new 40 Under 40, full of inspiring entrepreneurs and ambitious execs. One of the honorees who got the most attention and love on social media wasn’t a businessperson, per se: it was Ronda Rousey, UFC fighter.

Rousey is strong, independent, vocal, and controversial. She’s certainly unique and handles things her own way—when we sent her the list of questions we send to all new members of our 40 Under 40, rather than answer them by email, she recorded herself answering the questions and sent us the audio file. Here are her candid answers to our pressing questions. (And in case you’re wondering why Rousey, an athlete, belongs on this list of business influence, find the answer here: Why Ronda Rousey is on our 40 Under 40 list.)

What’s the best advice you ever got?

I get asked that a lot and I always go back to my mom’s, “No one has the right to beat you.” I take that to every venue that I’m in. She would say, “Someone has to be the best in the world, why not you?” That applies to fighting, writing, acting, business. I always try to keep that in mind.

What advice would you give your 20-year-old self?

Everything that you think is the end of the world right now won’t even matter to you in two years.

What does success mean to you?

I’m still trying to figure out what success means, but I think I’ll consider myself truly successful when I feel like I’ve done enough, and I can sit back and do nothing for the rest of my life. Some people talk about how successful I am, but it’s really hard for me to accept it until I can just sit on a rocking chair and just bask in everything I did. I don’t think I’m successful yet.

What’s been the lowest moment in your career?

I think when I lost in the early rounds of the 2005 Judo World Championships in Cairo. Because it was the first time where I thought I really performed below my potential.

What was your first concert?

A surprise, free Pennywise concert at LMU. [Rousey grew up in Riverside, Ca., about an hour away from campus.] I was in the mosh pit at 14 years old because I thought I was so hard because I did judo. And I was so tiny I could crowd surf; everyone would just pick me up.

Got a favorite song right now?

Sublime is always my favorite band, but I’ve been particularly obsessed with listening to Diamond Rings lately.

What show are you binge-watching at the moment?

Do you have a guilty pleasure?

What’s your favorite restaurant where you live?

I think Maxwell’s in Venice. It’s a breakfast joint, the garbage omelette and french toast is my jam. Actually, no, scratch that, Sauce on Hampton is my favorite. I order from there all the time, I’m obsessed with their sweet potatoes.

I’m not a big foodie. I like eating at home. I’m not saying restaurants, but every meal that I had in Armenia was the best meal I had in my life. That was my favorite place to eat.

What’s something we wouldn’t know from googling you?

I wrote Animorphs fan-fiction as a kid. I did. And I rewrote the powers to be the way I wanted them to be. Dork. And it was on a floppy disk, I remember I saved it to a floppy disk. So there is a floppy disk somewhere with my Animorph fantasy life.