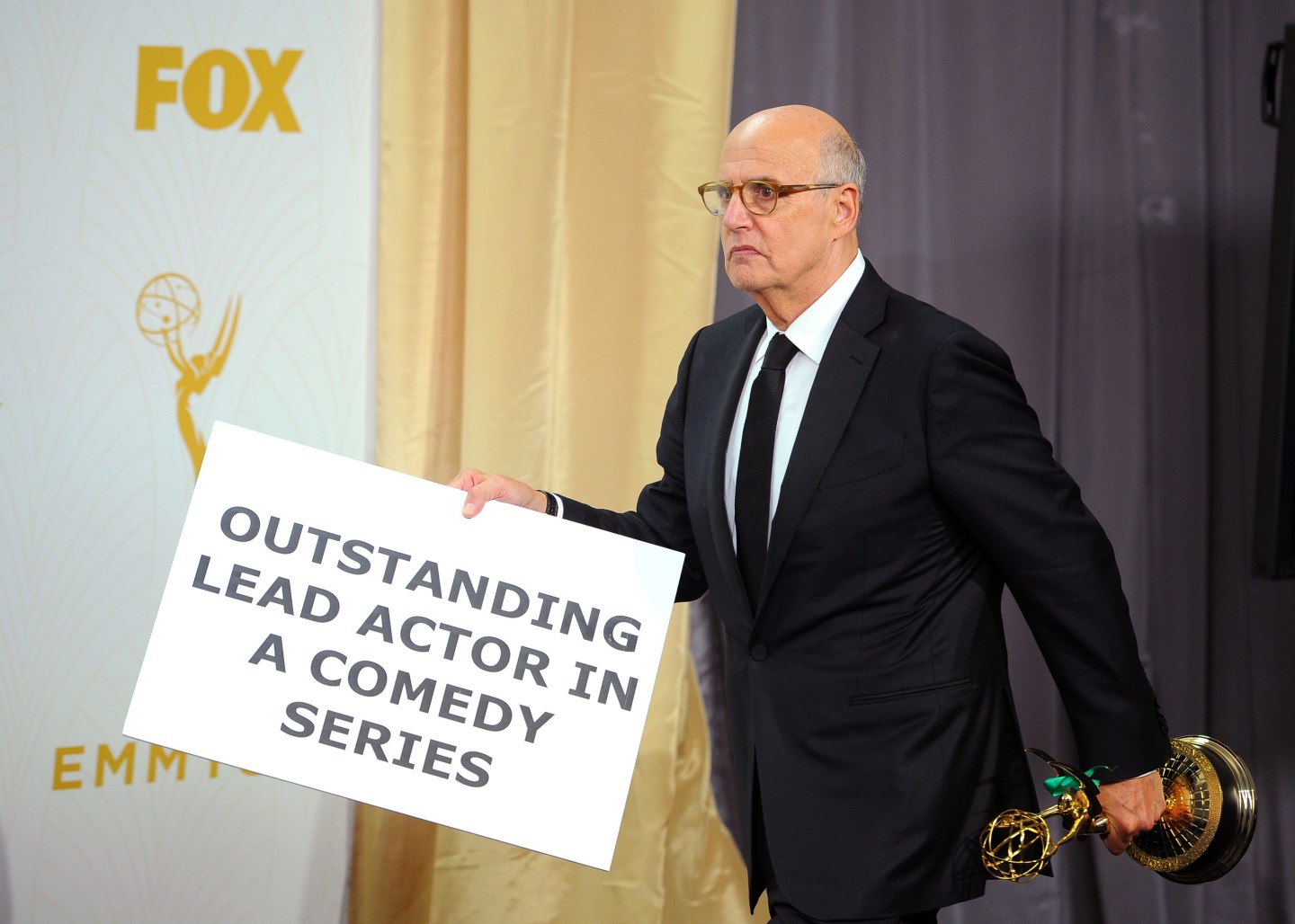 IMAGE DISTRIBUTED FOR THE TELEVISION ACADEMY - Jeffrey Tambor poses with the award for outstanding lead actor in a comedy series for Transparent at the 67th Primetime Emmy Awards on Sunday, Sept. 20, 2015, at the Microsoft Theater in Los Angeles. (Photo by Vince Bucci/Invision for the Television Academy/AP Images)
Photograph by Vince Bucci— Invision for the Television Academy/AP

It was the big question at the start of the night: Would “Modern Family” make history by earning a sixth consecutive Emmy for outstanding comedy series, or face defeat from fellow frontrunners HBO’s “Veep” and Amazon’s”Transparent”?

Predictions of a “Modern Family” win were soon snuffed out at Sunday night’s Emmy Awards when HBO’s “Veep” began taking home trophies in the comedy category for outstanding writing and supporting actor (Tony Hale), with a win for best actress (Julia Louis-Dreyfus) almost inevitable (Amy Schumer, whose star has fast rising, is down but not out).

At the close of the night, Emmy voters ignored tradition (and ABC’s “Modern Family”) to hand “Veep” top comedy honors. Minutes later, “Game of Thrones” trounced “Mad Men,” which bowed this spring after seven seasons, for best drama. It was a good night for HBO. (It was the first time in eight years that HBO won in the best drama category.)

But perhaps the most striking win was for Amazon Studio’s barrier-breaking “Transparent.” Showrunner/creator Jill Soloway accepted a director prize and star Jeffrey Tambor won the award for outstanding actor in a comedy series, in recognition for his soulful portrayal of a father who comes out as transgender to his family.

By the close of the nearly three-hour Fox broadcast, there was no doubt: Goliath—ie. the traditional network TV— was in the dust, prestige cable (HBO) and streaming video (Amazon) dominating.

Fourteen years ago, “Sex and the City” became the first cable show to score an outstanding comedy Emmy, marking a milestone for HBO and its premium-TV siblings. The racy, revolutionary series featuring Carrie Bradshaw (“the first female anti-hero on television,” according to Emily Nussbaum in her spot-on in-defense-of essay) upset network stalwarts “Everybody Loves Raymond,” “Will and Grace” and “Frasier,” the smash NBC sitcom tied with “Modern Family” for five consecutive Emmy wins, circa 1994-1998.

Had “Transparent” triumphed, Amazon Studios would’ve won similar bragging rights as the inaugural streaming service to claim the Emmy for outstanding comedy. (Netflix’s “House of Cards,” meanwhile, has been nominated three times in the drama category, losing to “Game of Thrones” and twice to AMC’s “Breaking Bad.”)

The Emmys traditionally rewarded the familiar over the offbeat. Not so much anymore. A new golden age of television has emerged, launching series with superior storytelling that are more interesting than much of anything you’ll see at the local multiplex. As streaming TV gathers steam, the options stand to be endless — or so it would seem.

As Andy Samberg observed in his introduction, there are countless shows to catch up on and not nearly enough time. (Perhaps that’s the reason HBO’s “Olive Kitteridge” swept the limited-series or movie category: Were busy voters mindlessly ticking the boxes, thinking, “I haven’t seen this, but it’s HBO, so it must be good and now I can skip ‘Wolf Hall'”?)

The future problem for the Emmys may well be making room for all the arty, on-demand critical darlings in contention.