A new Glass-Steagall for banks: One giant step for Congress, one small step for us all 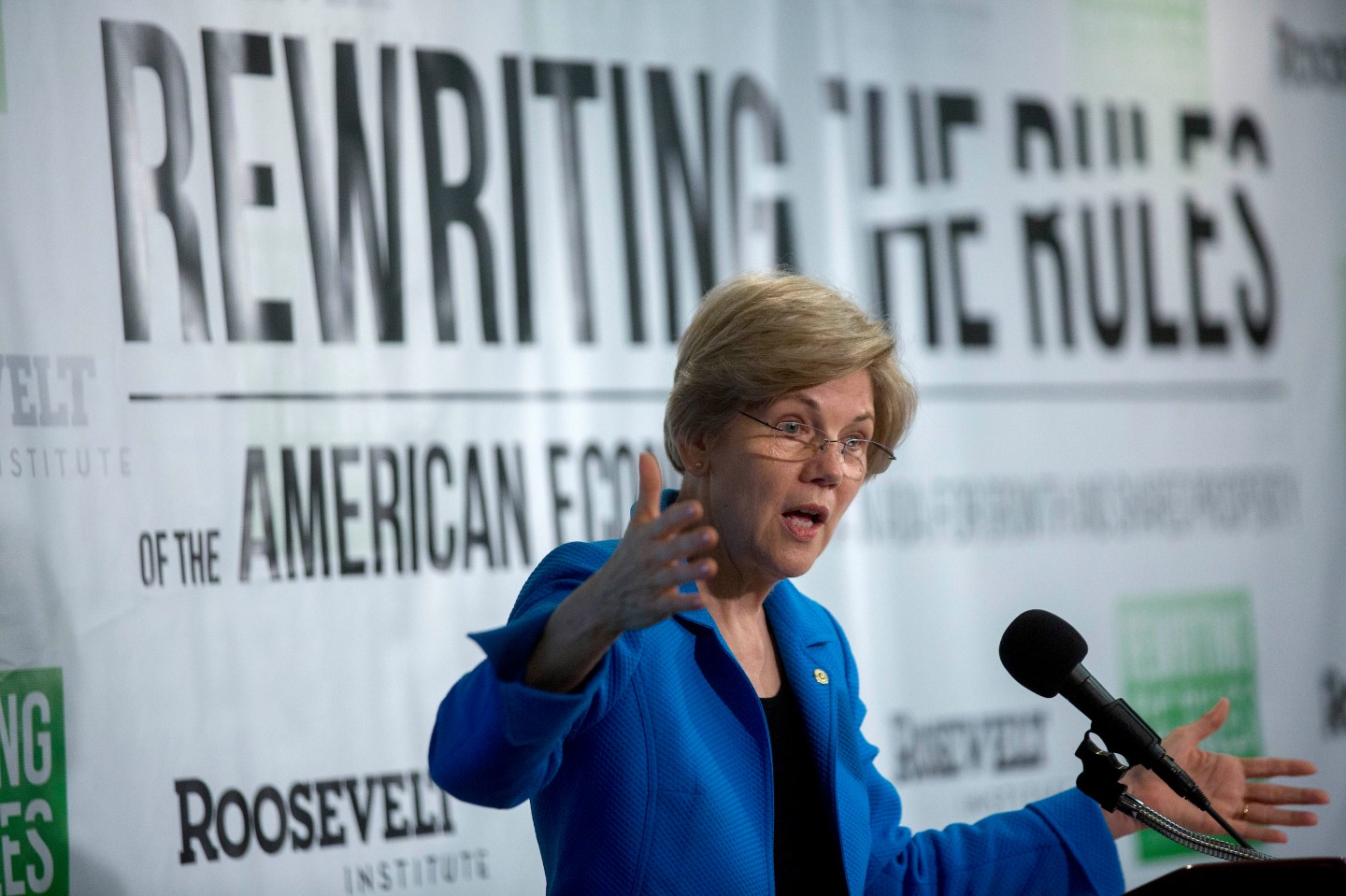 Senator Elizabeth Warren (D-Mass.) speaks during a Roosevelt Institute event at the National Press Club in Washington, D.C. on May 12.
Photograph by Andrew Harrer — Bloomberg via Getty Images

It looks like corporate governance just might be a hot topic for the Democratic presidential primary debates. Who’d have guessed?

Senators Elizabeth Warren, John McCain, Maria Cantwell, and Angus King have proposed a new Glass-Steagall bill. The measure would reinstate many of the features of the original Glass-Steagall banking act of 1933, a Depression-era law that prevented commercial banks from taking on business ordinarily done at investment banks. The new bill will also address risky activities that bankers had not dreamed up 80 years ago.

The new Glass-Steagall specifically addresses the governance of banks with insured deposits. The idea is that a bank should not use our deposits in ways that put the bank or the economy at undue risk.

The Democratic presidential candidates are taking sides in the debate. Bernie Sanders and Marvin O’Malley support a new Glass-Steagall. But, according to press reports last week, Hillary Clinton will not, even though the bill addresses the use of derivatives, something she expressed concerns about in November of 2007. Perhaps Clinton is looking ahead to the general elections. But if you are seeking election as a Democratic Party candidate, a failure to endorse Glass-Stegall could be a risky bet of its own—a gamble, perhaps, that money will trump voters in the upcoming Democratic primaries.

The reasons for the new bill are many. In addition to all the arguments of fairness and prudence, there are many practical, boots-on-the-ground reasons Congress should pass it now.

Boards of directors are responsible for setting the risk appetite of a company. And they can’t do that effectively in a firm with wildly different risk attributes. In the last eight years, post-financial crisis, boards at the largest banks that have both significant depository and investment banking arms have had the opportunity to show us they can excel at effectively managing this tricky balance—and they have failed to do that. J.P. Morgan’s (JPM) London Whale trading debacle was just one notable example. Post-crisis, the largest U.S. banks have treated us to a continual stream of operations failures and manipulations du jour. Earlier this month, one head of a systemically important financial institution (SIFI) expressed to me his astonishment at the ongoing ethical lapses. It is impossible to create the kind of safe banks we need as depository institutions if they also engage in unfettered speculation.

Regulators and others have continued to express concern about the cultures at the banks. William Dudley, president and CEO of the Federal Reserve Bank of New York spoke last year on “Enhancing Financial Stability by Improving Culture in the Financial Services Industry.”

Pre-crisis, I witnessed the way in which the mergers of traditional and investment banks created negative cultural shifts. At Citigroup (C), after the Salomon Smith-Barney merger, for example, the aggressive, transaction-oriented nature of investment banking began running roughshod over the more genteel business of corporate relationship management. As a result, relationships were out. Quick bucks were in. And along the way, the company lost one of its greatest attributes: a culture of strategic inquiry.

A recent survey supports the culture concerns. Fortune’s Stephen Gandel reported in May that according to a survey by law firm Labaton Sucharow and the University of Notre Dame, “About a third of Wall Streeter’s higher paid employees say they have witnessed or know of illegal activity at their firms. One in five of the survey’s respondents said they believed a little bending of the rules, either ethical or legal, was necessary to be successful on Wall Street.” And to boot, regulators may be completely in the dark. According to the survey, 25% of employees making over $500,000 believed they “have signed or have been asked to sign agreements with their employers banning them from reporting to regulators on illegal behavior they witness at their jobs.”

It’s true that when the financial crisis erupted in 2007, Glass-Steagall was not the first fix that leapt to my mind. I’d been warning since the late 1990s that loan securitizations were bad economic moves for commercial banks while lining the pockets of the investment banks that sold them. Those securitizations were fueling a risky lending boom without adding value to the economy. Commercial banks had poorly designed compensation programs that encouraged risky lending, loan sales, and securitization. Investment bankers were overpaid based on the value they created for customers. And some corporate treasurers and CFOs had only just begun to be leery of investment banking products, following purchases of derivatives and illiquid instruments that they and their boards did not understand.

Opponents of the new bill say the return of Glass-Steagall is not necessary. They argue variously that the 1999 repeal of the original bill did not single-handedly cause the last financial crisis or that it did not contribute to the crisis at all. But how relevant is that?

Analogizing, we can argue whether or not pollution has contributed to climate change, and how much, but we are still left with the harms of pollution and the realities of rising seas. Similarly, we can argue about whether, or how much, the repeal of Glass-Steagall contributed to the last crisis (Public Citizen’s Bart Naylor does a good job of this in his paper, “Safety Glass”), but that doesn’t absolve us of the responsibility to address the harms caused by its repeal—and the damages caused by the crisis.

Another line detractors use is that reinstating Glass-Steagall would actually make things worse. A Morningstar columnist wrote last week that if Glass-Steagall had been in place, Goldman Sachs (GS) and Morgan Stanley (MS) might have failed. Sure, investors in those stocks would have lost a lot of money, but why should their misfortune trump the fortunes of everyone else? In fact, all else being equal, if the board and investors of Goldman and Morgan Stanley really believed their firms could fail, they’d be more likely to encourage better risk management than if they didn’t. Why should society provide a smooth unwind and special access to liquidity to volatile trading firms?

In 2013, the economist Dean Baker wrote, “What is striking about the argument on re-instating Glass-Steagall is that there really is no downside. The banks argue that it will be inconvenient to separate their divisions, but companies sell off divisions all the time.”

The new Glass-Steagall is necessary but not sufficient. Its future, however, is uncertain. As Will Rogers famously remarked, “The short memories of the American voters is what keeps our politicians in office.”