The 10 biggest retailers in the Fortune 500 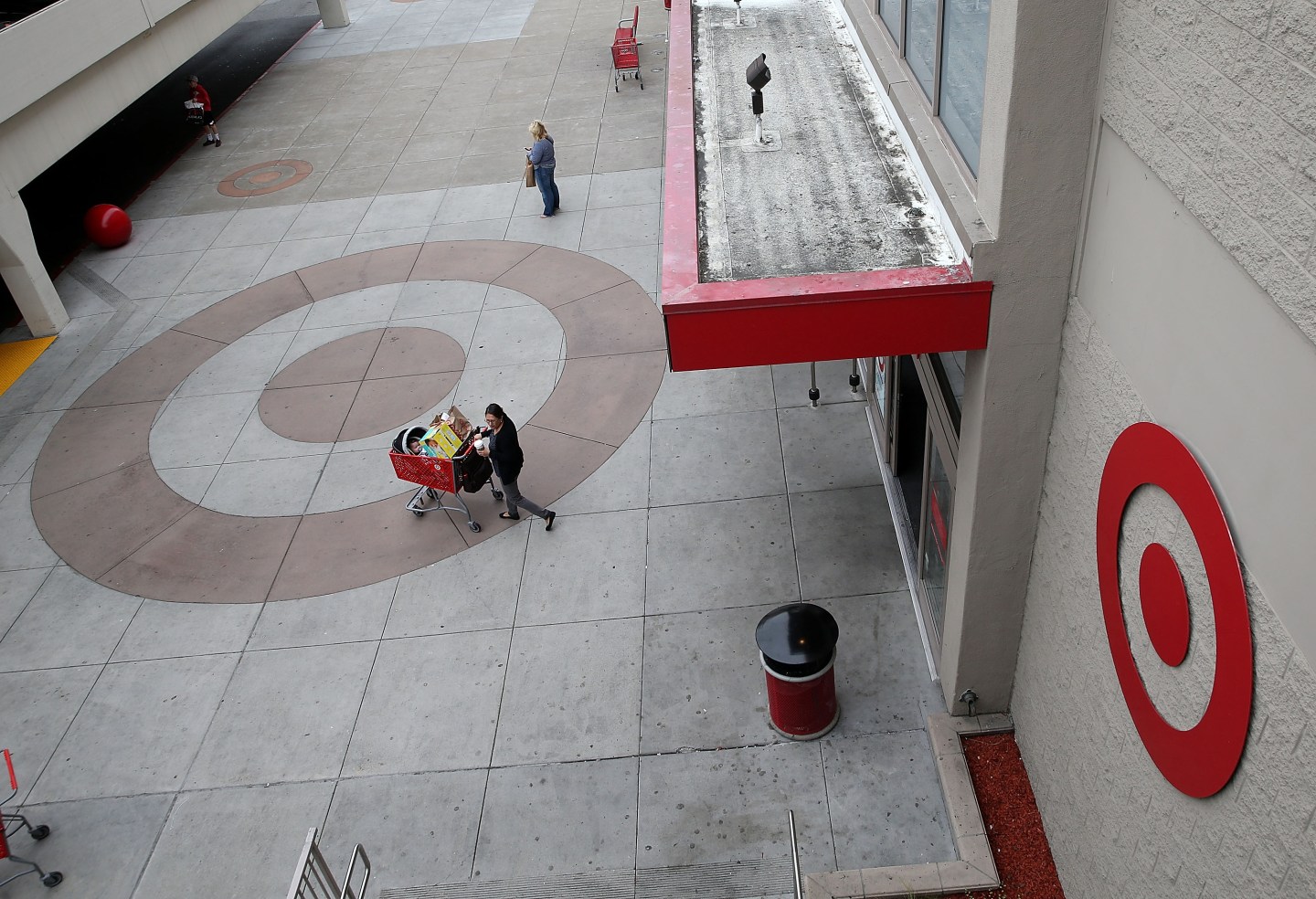 Retail had quite a year in 2014. The much hoped-for recovery in consumer spending finally arrived just in time for the holiday season after months of stop-and-start behavior by shoppers. The job market perked up, gas prices fell and home values rose, giving Americans more confidence, and greater means to go spend, lifting many companies out of what one CEO called a long-standing “retail funk.”

Yet it wasn’t a banner year across the board as frugality and bargain-hunting proved to be a permanent fixture of consumer behavior. Many retailers that had been struggling for years continued to do so. Some of the biggest drops in the Fortune 500 rankings were by such retailers. Best Buy (BBY) fell 12 spots to #72. Its business has stabilized, but the electronics retailer is still grappling with decreasing TV prices and intense competition from online retailers. Toys “R” Us, J.C. Penney (JCP) and Gap Inc (GPS) each fell at least 10 spots as they struggled to find a new place for themselves in shoppers’ growing universe of choices. And Sears (SHLD) continues to fall down the ranking quickly, having spent a good chunk of 2014 selling off its best assets to avoid a cash crunch and closing many stores.

At the same time, many stores that adapted to customers’ growing frugality were among the big winners. TJX Cos (TJX), parent of Marshalls and T.J. Maxx, and Dollar General (DG) again took market share from department stores and large discount chains, respectively, helping them to ascend the Fortune 500 ranks. Already in 2015, we are seeing plenty of big box retailers taking a page from those rivals: Macy’s (M) and Kohl’s (KSS) are each testing out off-price concept stores, while Walmart and Target are expanding their fleets of smaller stores, among other growth initiatives.

2015 so far has proven to be another bumpy year for the nation’s largest retailers: shoppers have more money in their pocket but are still extra careful about spending it. So the shakeout between winners and losers should continue apace.

The world's largest retailer, and company for that matter, managed to break a nearly two-year long streak of U.S. comparable sales declines last year. Under CEO Doug McMillon, Wal-Mart Stores (WMT) has gotten aggressive about improving its fresh foods business, Sam's Club's performance, e-commerce and results in key overseas markets like Great Britain. While its financial results are improving, the first three months of the year showed how much works lays ahead. Its e-commerce growth has lagged Target's, and its profit has sagged as it invests in tech and better pay to boost customer service.

Costco (COST) has been consistently outdoing Wal-Mart's Sam's Club, helped by enormous popularity of its Kirkland private label brand, ability to add products to that line and the loyalty of its business customers. And the retailer is getting more serious about e-commerce and wants to expand internationally, meaning its growth story is far from over. But Costco is a laggard in e-commerce, leaving Sam's Club some room to close that gap.

Customers shop for light bulbs at a Home Depot store in Chicago, Illinois.

The do-it-yourself retailer has been on a tear for years, benefiting from the housing recovery and people's willingness to invest in big home projects now that they're more confident about their homes will keep their value.

Home Depot (HD) is under a new CEO, Craig Menear, but Wall Street remains bullish on this company, which still has a lot more upside in its e-commerce potential and trots out private label products contractors love. The only rain that could come down on its parade is a rise in interest rates that would cool down the housing market.

Target (TGT) has been on the mend after a tough 2014 during which it was still recovering from a massive data breach and a CEO change. Under Brian Cornell, a former PepsiCo and Sam's Club executive, Target has made it clear it plans to get its cachet back, and is in the process of revamping its grocery business to focus more on organic and natural foods, all while jazzing up its apparel and health and wellness assortments. The discount retailer is also expanding its fleet of urban stores as it looks to broaden its appeal beyond suburban moms. So far it looks like it's working: sales have beat Wall Street forecasts for two quarters running.

A customer takes a piece of sheet rock from a stack at a Lowe's Cos. store in San Bruno, California, U.S., on Friday, Feb. 20, 2015. Lowe's Cos. is scheduled to release earnings figures on Feb. 25. Photographer: David Paul Morris/Bloomberg via Getty Images

While Lowe's (LOW) has long lagged its bigger rival Home Depot in terms of sales growth, the home repairs retailer is also benefiting from the housing market's recovery, as well as a broader assortment of private label goods. The only thing that could really take wind out of Lowe's sails would be a jump in interest rates.

Best Buy (BBY) surprised many in the industry and on Wall Street when it reported surprisingly strong sales numbers for the holiday season and again for the first quarter. But the electronics retailer warned investors that 2015 sales would be depressed by lower TV prices. The retailer is making a big push into smart homes and improving its Geek Squad services, plus it is using its physical stores to showcase brands better and speed up order delivery, so Best Buy still has a few tricks in its bag.

A shopper stands with an empty shopping cart in the toy aisle of a Kmart discount store, operated Sears Holdings Corp., ahead of Black Friday in Frankfort, Kentucky, U.S., on Thursday, Nov. 27, 2014. An estimated 140 million U.S. shoppers are expected to hit stores and the Web this weekend in search of discounts, kicking off what retailers predict will be the best holiday season in three years. Photographer: Luke Sharrett/Bloomberg via Getty Images

Sears Holdings (SHLD) spent much of 2014 selling off key assets, including some its best stores and the Lands' End apparel line, to raise money for its attempt to reinvent itself as a more tech-oriented retailer. And despite efforts to shed weak stores, Sears and Kmart each continued to struggle on the comparable sales front. Expect 2015 to test CEO Eddie Lampert's claims that he can re-build a business through innovative e-commerce after years of declining sales.

A shopper is reflected in the window of a Marshalls Plc store in San Francisco, California, U.S., on Tuesday, March 3, 2015. The Bloomberg Consumer Comfort Index, a survey which is measures attitudes about the economy, is scheduled to be released on March 5. Photographer: David Paul Morris/Bloomberg via Getty Images

TJX Cos (TJX), owner of the Marshalls and T.J. Maxx discount fashion chains, again had a banner year as shoppers continued to look for bargains despite the improving economy, helping it surpass Macy's in revenue. Increasingly, TJX's stores are becoming a prime destination for manufacturers, rather than a place to dump unused merchandise from last season. In the first quarter of 2015, TJX's sales continued to boom, showing its is still stealing business from department stores.

Macy's (M) was one of the few department stores to thrive after the Great Recession, deftly managing to appeal to a higher end consumer, all while still being promotional. The department store also made big strides in e-commerce and is now a leader. But lately, its sales growth has sagged. The retailer has announced initiatives to kickstart growth, including launching a T.J. Maxx-style chain of discount stores, buying luxury beauty company Bluemercury and planning to open its first ever overseas store.

Staples (SPLS) fell six positions in the Fortune 500 to No. 133, showing how precarious the office supplies retailers are in a time customers can easily go online to re-order paper or buy electronics. The retailer, which at press time was about to merge with Office Depot, has tried to broaden the assortment in its larger stores with thinks like soft drinks and detergent, but many questions remain about the viability of its core business.