Why Vanguard and BlackRock could beat Peltz and Icahn 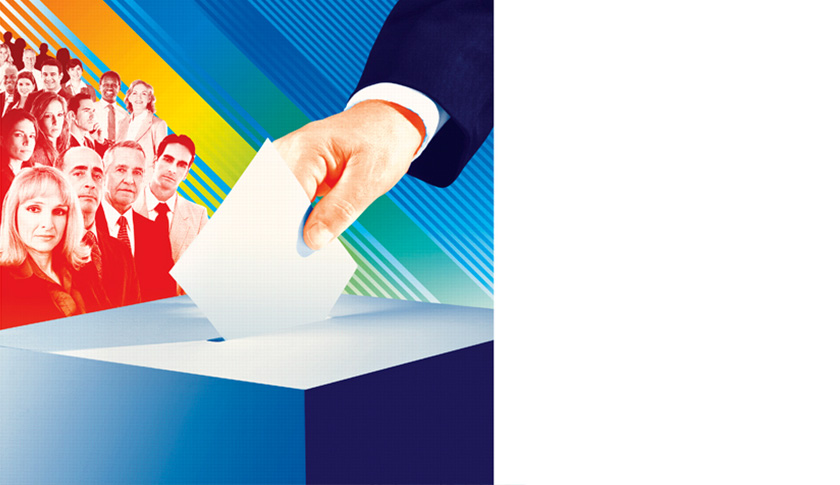 It was the corporate version of Mayweather vs. Pacquiao—DuPont (DD) CEO Ellen Kullman battling activist investor Nelson Peltz in a high-profile proxy fight over whose slate of directors should be elected to DuPont’s board. And like the injured Pacquiao, it turned out that Peltz was going into the fight with a major handicap to which most of the public was oblivious.

While Kullman and Peltz spent months campaigning for their candidates, the real muscle in this recent bout belonged to three companies that the media largely ignored: BlackRock, Vanguard Group, and State Street, the asset-­management firms that were DuPont’s largest shareholders by far. Though Peltz’s Trian Fund Management owned a substantial stake in DuPont—24 million shares—it was dwarfed by the three big institutions’ combined holdings: about 150 million shares owned on behalf of investors in their funds. On the morning of DuPont’s annual meeting in May, Kullman and Peltz got word that the giants were voting all their shares for Kullman’s slate, sealing the outcome of a closely fought contest. Kullman won, but BlackRock (BLK), Vanguard, and State Street (STT) provided the victory.

It’s a sign of changing times. High-profile activists like Peltz, Carl Icahn, David Einhorn, and Bill Ackman have shaken the giants of the Fortune 500 over the past 18 months. Icahn increased the market capitalization of the world’s most valuable company, Apple (AAPL), just by sending two tweets. But such headline-grabbing successes may have marked the apogee of their influence. The new reality is that the activists are not today’s true power players in corporate America. The biggest companies are increasingly influenced by a new set of bosses—small in number, working mostly behind the scenes, and becoming more activist by the day. Together they’re creating a new order for large corporations and even changing the way the capitalist system operates. They’re the biggest of the big institutional investors, the largest asset managers.

The reach of these owners is startling. Institutional investors collectively own most of the shares in virtually all of America’s biggest companies. Of the 30 companies in the Dow Jones industrial average, 29 are majority-owned by institutions; the sole exception is Walmart (WMT). That ownership is highly concentrated in a few giant companies. DuPont’s case is typical: 68% of its shares were owned by 1,359 institutions at the time of the proxy fight, but the three biggest institutions owned about 17%, and the 15 biggest institutions owned 35%. And the concentration is increasing: The combined assets under management of BlackRock, Vanguard, and State Street have nearly quintupled over the past decade.

This expanding financial might by itself isn’t enough to make the biggest institutions more important than the high-profile activists. The game changer is that the institutions are also becoming more assertive, and they aren’t being subtle about it. In the past three months the chiefs of the two biggest asset managers, BlackRock and Vanguard, have sent letters to all the S&P 500 companies explaining the new rules of the game. “Our starting point is to support management,” BlackRock chief Larry Fink wrote. “But this is more difficult to do where management has not articulated a clear long-term vision, strategic direction, and credible metrics against which to assess performance. In such cases, we will take action to ensure that the owners’ interests are effectively served.” No board or CEO can ignore the message, considering that BlackRock directs $4.7 trillion.

But why now? After all, large institutions surpassed individual investors as the principal owners of big companies decades ago, and they rarely exercised their power. They’re doing it now because their world is changing in two important ways:

Indexing is catching on. Individuals, pension funds, endowment funds, and other investors are increasingly realizing that investing in index funds, rather than in actively managed funds, makes sense. Asset managers that specialize in indexing, or “passive management”—BlackRock, Vanguard, and State Street are the largest by far—have grown twice as fast as other asset managers over the past decade. Until recently conventional wisdom held that indexers had zero interest in influencing their portfolio companies. But now they’ve realized that while active managers can sell a stock they don’t like, passive managers can’t; if it’s part of the index (say, the S&P 500), they have to own it. Passive managers have only one way to improve their returns: influence their portfolio companies. Vanguard chief Bill McNabb explained to a group of corporate directors last fall, “As ­indexers, we are permanent shareholders … That is precisely why we care so much about good governance.” Passive managers are the new activists.

Traditional pensions are dwindling. Back when almost every big company maintained a pension fund that it parceled out to asset managers, those managers recoiled from getting involved in companies’ affairs or voting their shares against management’s wishes (after all, it could cost them business). Now old-style pension plans are mostly gone, replaced by defined-contribution plans in which employees direct their own investments. Asset managers are unshackled to say what they want and vote as they wish.

This revolution in corporate governance has crept up on us because it happens mostly behind the scenes. The high-profile activist investors make as much noise as possible because they must attract other investors to their cause, but the biggest asset managers hold so much stock that they don’t need to attract anyone. When they meet with a board of directors or a CEO, as they are increasingly doing, they don’t tweet or issue a press release.

So we won’t get daily updates on how the biggest institutions are influencing companies, but the effects are already starting to play out. They’re profound and often surprising:

Long-term management is back. Wall Street’s insatiable hunger for short-term performance seems to be one of every CEO’s top complaints, and many activists do demand immediate results: return cash to shareholders, break up the company, sell assets. But the biggest asset managers think long term because they have to. “To borrow a phrase from Warren Buffett,” says McNabb, “our favorite holding period is forever.” BlackRock’s Fink says the best way CEOs can do their duty—and win his funds’ support—is to “clearly and effectively articulate their strategy for sustainable long-term growth.”

Short-term-obsessed activists may get some of what they demand; Peltz was right that DuPont should sell the country club it owned, and the company is selling it. But if a company can present a persuasive long-term plan, it can prevail. Peltz has been trying for two years to break up PepsiCo (PEP) by separating its beverage and snack businesses, and the plan has gone nowhere. PepsiCo CEO Indra Nooyi is winning by arguing that keeping the company intact makes better long-term sense. Activist Jeffrey Smith’s Starboard Value failed in its 2012 attempt to unseat three AOL (AOL) directors. Long-term shareholders are probably glad that CEO Tim Armstrong prevailed: AOL returned 127% between then and the company’s announced acquisition by Verizon (VZ) in May; the S&P 500 returned only 58%.

Activists will become less important. They create value by spotting opportunities to improve a company’s performance. But as the largest institutions pay closer attention to their portfolio companies, they’ll spot more opportunities on their own, and activists’ influence will wane. Boards should expect to hear directly from major institutions, without publicity, more often.

ISS and Glass Lewis will lose influence. The two main proxy advisory firms made themselves powerful by advising pension funds, endowment funds, and others on how to vote their shares. But the big asset managers base their votes on their own analyses and are building up their staffs to study proxy issues. As these managers build bigger stakes, companies will have to focus more on winning their votes and less on convincing ISS and Glass Lewis. Both advisory firms urged institutions to vote for at least some of Peltz’s board candidates at DuPont; all those candidates lost.

Farewell to the monarchical CEO. CEO power has been in decline since 1992, when the directors of General Motors (GM) fired CEO Robert Stempel and asked attorney Ira Millstein to formulate new governance guidelines. At about the same time, federal rule changes enabled large shareholders to more easily coordinate action to press for change at companies. The biggest institutions’ size and growing assertiveness will further impinge on CEO power. The top institutions say they don’t want to manage a company’s business—they can’t, since they own shares in thousands of companies—but as they increasingly engage with boards, the CEO will feel it. Many CEOs now face powerful owners of a type that hasn’t existed at giant corporations since the days when most were family-owned.

Conglomerates will be endangered. Corporate breakups championed by activists are a trend of the past few years. Kraft Foods (KRFT), HP (HPQ), eBay (EBAY), Symantec (SYMC), and other companies have split or are splitting—and it wouldn’t be happening without backing from the largest institutions. Expect the trend to endure: Separate businesses that don’t support one another operationally tend to perform better independently than as part of the same company, and breakups often make long-term sense.

These changes are combining to create a new version of capitalism, which ­raises important issues. Is there a danger of too much power being concentrated in the largest institutions? It’s easy at least to imagine big asset managers joining forces to break up companies and combine the pieces into new, single-­industry enterprises. That isn’t necessarily a problem—efficiency is good, and we have antitrust laws—but if reshufflings eliminate jobs or move operations offshore, the institutions could face political heat. How will they juggle the conflicting demands?

How will corporations interact with bigger, more assertive institutions? What information can companies legally share with their largest owners? To answer those and related questions, the three biggest institutions have joined with a group of directors, law firms, and advisers to form the Shareholder-Director Exchange. It has devised a protocol to help companies and institutions engage in new ways.

As the biggest asset managers gain more power and exercise it more freely, they bear a heavy responsibility. They may influence employment, national competitiveness, and economic policy, for better or for worse. They can ensure a balance between short-term and long-term corporate goals, and between value creation and societal needs. They can keep succession planning near the top of every company’s agenda. How they will discharge their responsibility remains to be seen, but we know already that the Fortune 500 have entered a new era.

What a big-institution era means for your portfolio

A new advantage of indexing — Decades of research show that indexing works better than trying to pick winning stocks. As the largest indexers begin to nudge corporate boards toward more investor-friendly governance, the strategy will gain horsepower.

More reason to buy and hold — The classic advice for individual investors looks even better now that the biggest asset managers are insisting that boards focus on long-term performance.

A greater choice of pure plays — If you prefer to pick individual stocks, the trend away from conglomeration will result in more single-industry companies from which to choose. You’ll be better able to assemble exactly the kind of portfolio you want.

Ram Charan is an adviser to many Fortune 500 companies and author or co-author of 18 books, including the bestselling “Execution.”

A version of this article appears in the June 15, 2015 issue of Fortune magazine with the headline “The quiet giants take on the activists.”