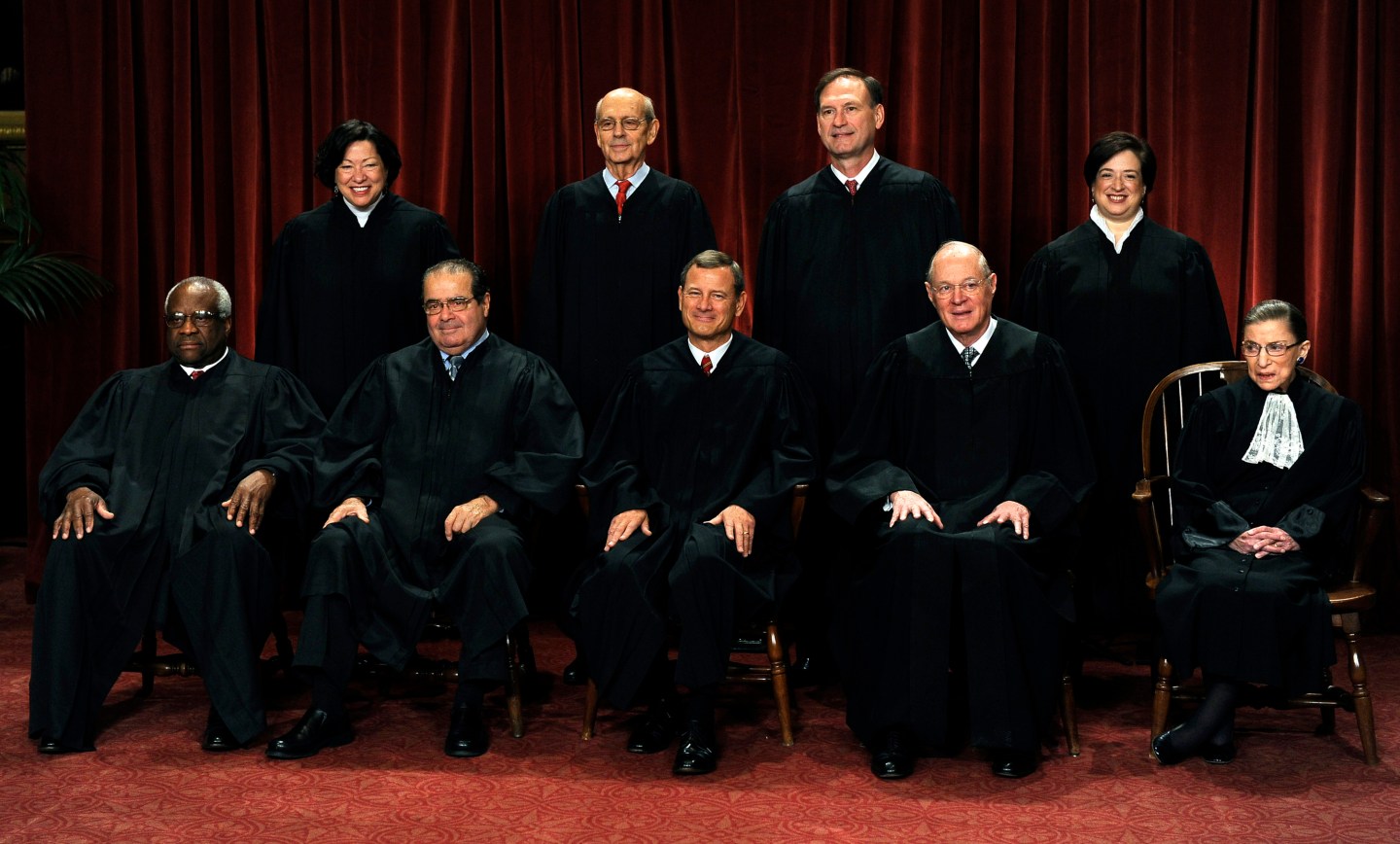 Traditionally, Supreme Court justices were near recluses, churning out rulings as they quietly worked behind stately marble columns. But they have begun to pop up in public venues—giving speeches, promoting books, celebrating marriages and even attending operas—like never before. Their new celebrity is also drawing a flurry of new, and often critical, scrutiny.

Watchdog groups are calling on the nine justices, who are appointed for life barring a moral or ethical cataclysm, to be more open and accountable, particularly about any stock investments they may have in the corporations whose legal disputes often wind up on their docket. But it’s highly unlikely the court will drop its veil of secrecy and embrace any efforts to curb its freedom to act as final judicial arbiter as it sees fit.

One change urged by a group called “Fix the Court” calls on the justices to disclose more information about any possible or actual conflicts of interest that arise from their financial holdings and other outside entanglements.

Fix the Court is hardly alone. The nine justices have been urged to change their ways for decades, particularly amid controversies like 2000 Bush v. Gore presidential contest decision was decided or the recent campaign finance remake in Citizens United.

But calls for curbs have fallen on deaf ears, leaving the court as the country’s only judicial body without an established ethics code. The Supreme Court relies on voluntary compliance. In April, Democratic lawmakers introduced the Supreme Court Ethics Act, which would require the top court to adopt written ethics rules within six months of the law’s enactment.

Since Congress already determines the number of Supreme Court members and what they are paid, Murphy argues lawmakers are within their authority to mandate a code of conduct for the court.

Some activities by justices have fanned the interest in increased transparency, particularly attendance at conservative political gatherings and previous conservative political activism by Justice Clarence Thomas’s wife, Virginia. Concerns about the activities and political entanglements of justices are not limited, though, to conservative-leaning justices. Ruth Bader Ginsberg, who recently presided over a same-sex marriage ceremony, has been urged to exclude herself from a soon-to-be released ruling on same-sex marriage on grounds her actions have sullied her objectivity.

But that’s for her to decide, according to the way the court operates, even though, over the years, hundreds of legal scholars have urged the court to adopt an ethics code. The chief decision-maker, Chief Justice John Roberts, has firmly rebuffed any curbs, insisting that a judicial ethics code is not needed because “no compilation of ethical rules can guarantee integrity.”

Where to draw the line is complex because it has been rare to quit the prestigious bench under pressure. Abe Fortas resigned after disclosures that he accepted payments from an outside foundation. Fortas also helped write the 1969 inaugural speech of Lyndon Johnson, the president who appointed him.

“Today, none of the justices would consult so closely with the executive branch—or would they?” asks Stephen Lubet, a law professor at Northwestern University School of Law, who tracks such ethics issues.

“When did SCOTUS ethics change, and how do we know the extent of the change? A code would address such questions before they became problematic,” Lubet argued recently on Faculty Lounge, a legal blog.

To introduce accountability and transparency, Fix the Court maintains, the court would need to institute major reforms like restricting the justices to one 18-year term instead of a life-time appointment. It would also require some less sweeping changes in disclosure of justices’ annual financial statements, explanations for sitting out a case—called a recusal—as well as more public information about groups and venues where they speak.

Some of that information can be dug up, but Gabe Roth, Fix the court’s executive director, maintains it would be clearer if the three justices who own individual stocks—Justices Roberts, Samuel Alito and Stephen Breyer—abandoned that practice. Instead, Roth is urging them to place their investments in blind trusts, such as presidents routinely do, or funds that include multiple companies.

The justices’ annual financial disclosures, like those of other government employees, can be opaque because holdings and investment values are listed in dollar ranges rather than specific amounts. The financial reporting does provide clues, such as which justices own stock in major corporations with business before the court, but it’s guesswork to figure out why they do—or do not—participate in cases.

In a recent report, Fix the Court reviewed 19 cases the court considered between 2009 and 2014 where the justices held stock in corporations involved. The report concluded that nearly 70% of the time, the justices voted in support of the way the companies recommended in legal papers, or friend-of-the-court briefs, filed with the court.

Even so, it is unclear how much, if at all, the rulings were swayed by stock ownership. For example, in the hotly contested 2013 case, U.S. versus Windsor, where many corporations filed friend-of-the-court documents supporting same-sex couples receiving the same federal benefits as opposite sex couples, the justices did not split their votes according to any discernible financial self interest.

Fix the Court, among others, also argues that, for transparency, the court should lift its ban on televising oral arguments, where lawyers for each side present arguments for their positions and the justices have a chance to ask questions. The justices have steadfastly refused to allow a public broadcast, leaving those interested in, or just curious about, a particular dispute to stand in long lines to briefly sit in the courtroom’s public section. But even jurists who are newer to the court and have been exposed to televised proceedings in lower courts seem to have mostly closed the door to broadcasts anytime soon.

The public can search for written clues, and consult the limited information in justices’ annual financial reports posted by watchdog groups like Judicial Watch. But that only offers hints about the professional and personal influences on the justices. A website launched last year called Scotus Map tracks the justices’ speeches and attendance at conferences. Such information is not routinely supplied by the Supreme Court’s website or its public information office.

While justices very occasionally acknowledge public concerns or criticism, there’s nothing in the law—nor is there any legal recourse—to require the court to adopt any change at all.