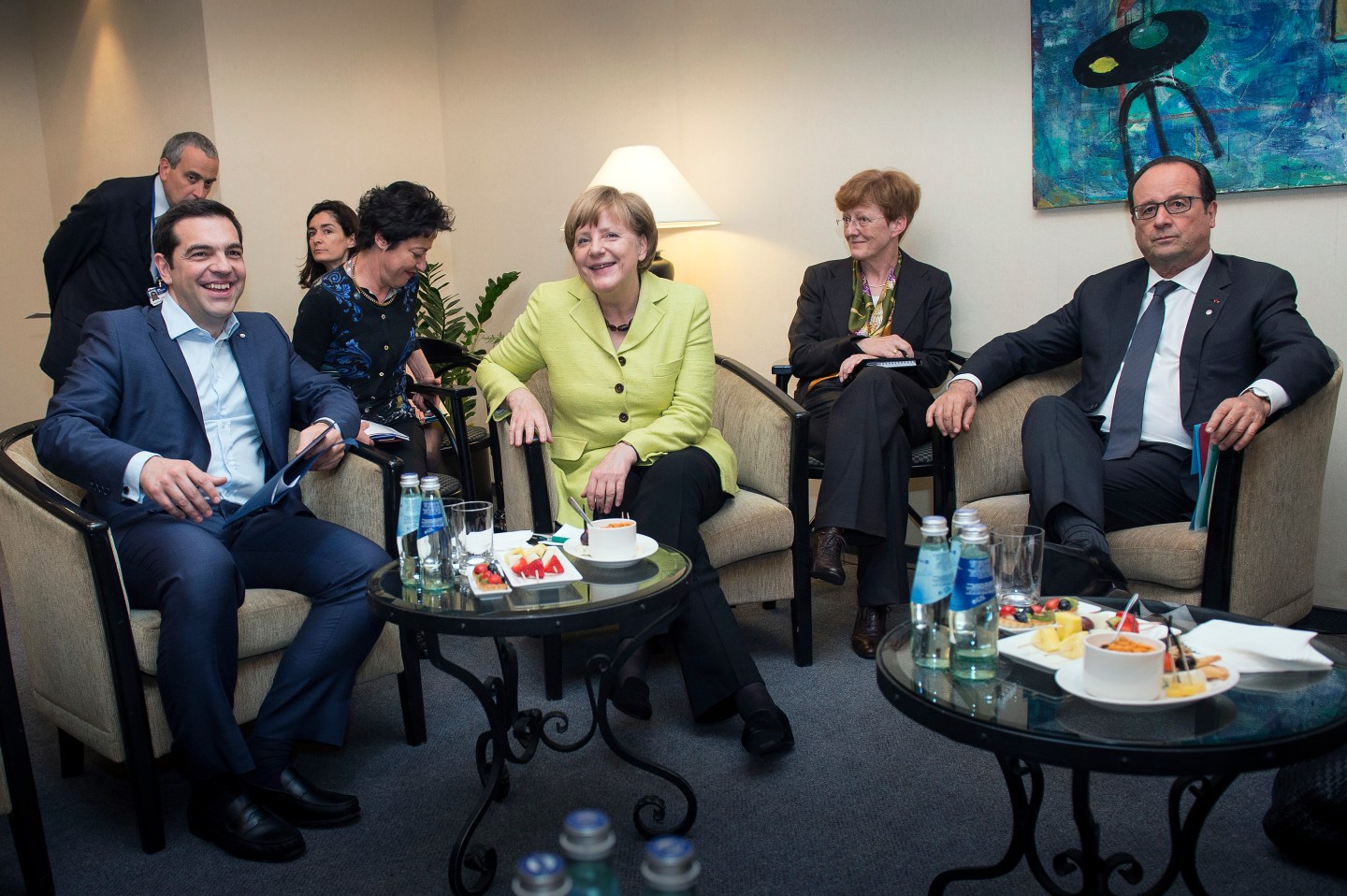 RIGA, LATVIA - MAY 21: In this handout photo provided by the German Government Press Office (BPA), (L-R) German Chancellor Angela Merkel, Greek Prime Minister Alexis Tsipras and French President Francois Hollande at the beginning of their meeting at the sidelines of the EU summit The Eastern Partnership on May 21, 2015 in Riga, Latvia. (Photo by Guido Bergmann/Bundesregierung via Getty Images)
Photograph by Getty Images

Wall Street stock futures are mixed while the dollar is mostly flat and crude oil futures are holding just above $60 a barrel.

Today’s must-read story is by Fortune‘s Beth Kowitt and it looks at how the organic food craze has been eating into the market once cominated by major packaged-food companies.

Ignore the beguiling headlines telling you “Greek official sees deal within days etc”. Merkel may be the Eurozone’s de facto leader but after a long late-night chat with Prime Minister Alexis Tsipras, she told reporters Friday there was no way she’ll cut a deal behind the back of the IMF, ECB and other Eurozone governments.

The maker of packaged soups and other foods is expected to announced a decline in third-quarter earnings and revenue when it reports this morning. Earlier this year, Campbell Soup (CPB) blamed declines in its second-quarter sales figures, in part, on poor weather conditions. Campbell is one of several large food companies that are scrambling to shift focus to respond to increased consumer preference for natural and organic fare over processed foods.

The U.S. Federal Reserve gave U.S. stocks a boost earlier this week with the release of minutes from the central bank’s April policy meeting that were fairly dovish with regard to the timing of a planned interest rate hike. Today, Fed chair Janet Yellen speaks publicly at an event in Providence, Rhode Island and investors will again be watching intently for possible clues as to when the rate hike should be expected.

Friday is always a slow day for corporate earnings reports, and particularly so ahead of a holiday weekend. Shoe retailer Foot Locker (FL) and farm equipment maker Deere & Co. (DE) will also release quarterly reports today. And, Ann Inc. (ANN) will issue first-quarter results this morning just a few days after the company, which owns the Ann Taylor and LOFT apparel brands, announced it is being sold to the parent company of rival retailer Lane Bryant.

Markets will be closed on Monday to mark the holiday, and a lot of people will likely be looking to duck out early today in order to get a head start on the three-day weekend. Many of those people are expected to hit the road at some point this weekend, too. AAA expects more than 37 million people in the U.S. to travel at least 50 miles this weekend, which would be the highest volume in a decade. Those drivers will be taking advantage of the cheapest Memorial Day gas prices in about five years, with the national average price at the pump around $2.73 for a gallon of regular gas.