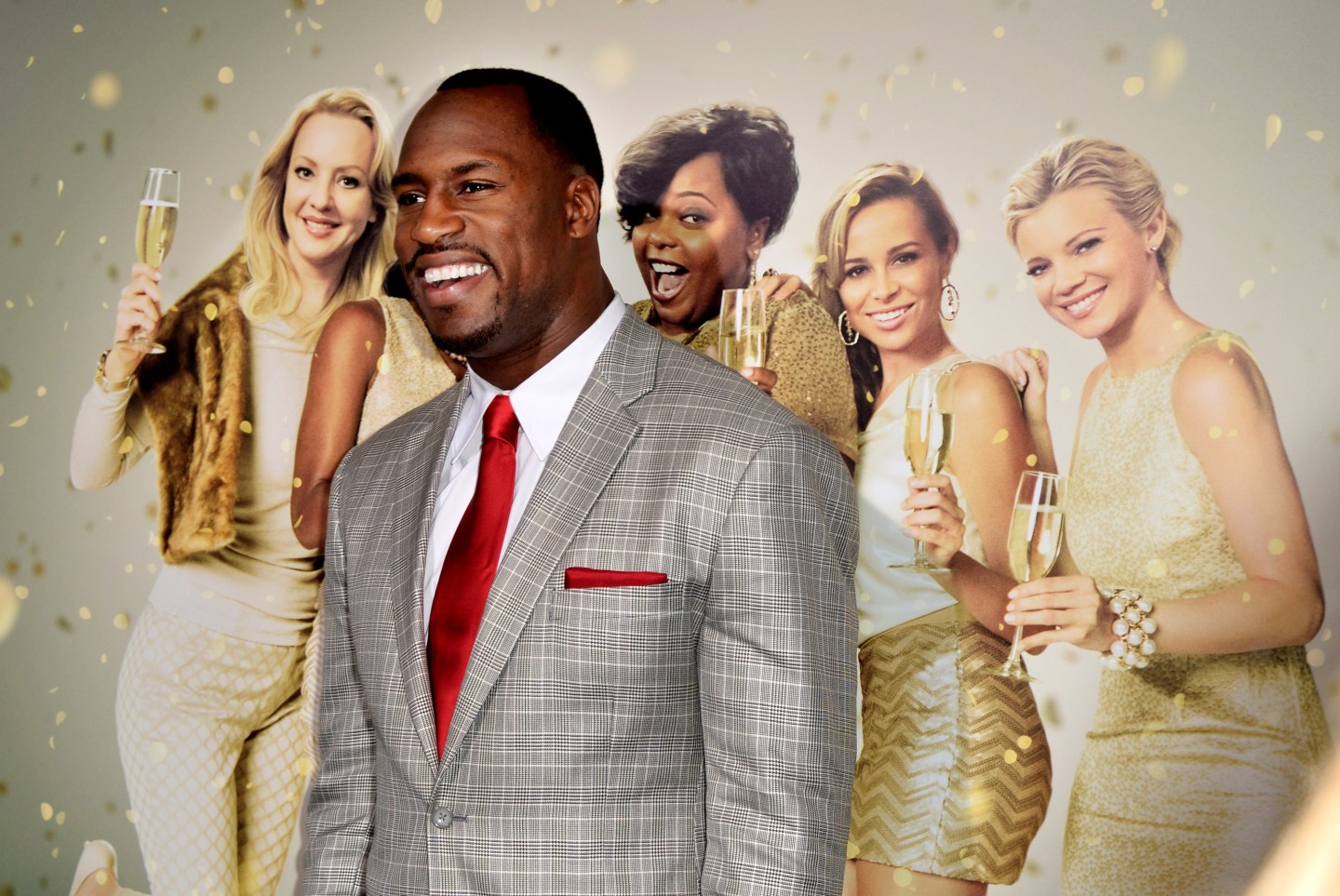 You might ask: Huh? By way of background, Fantex is a controversial investing platform that sells shares in “tracking stocks” tied to pro athletes. Fantex pays the athlete a one-time fee and in return gets a percentage stake in all of his future earnings. The investors, meanwhile, are buying a share in Fantex, but one that should rise or fall based on the perceived value of the athlete’s “brand” (both off- and on-field).

But Fantex’s contract with each star includes another right that, until now, it had not exercised: the ability to hop aboard with any personal investment the athlete chooses to make. Vernon Davis, whose stock was the first that Fantex took public, in April 2014, already owned a Jamba Juice franchise location in Santa Clara, California, that is branded with his name and opened in 2013. Now he is buying three more locations, all in California, and Fantex is co-investing with him at a 10% stake in each. (When it signed Davis, it paid him $4 million for a 10% stake in his future endeavors.)

Fantex CEO Buck French likes to stress the financial aspect of his unique company over the sports aspect—his goal, he says, is for serious investors to see Fantex stocks as a whole new asset class. A few years from now, he predicts, you’ll have your typical portfolio of varied equities, mutual funds, and, perhaps, a handful of shares in Fantex athletes. Fantex’s ability to co-invest with its athletes is, “one of the most interesting things about this asset class,” says French. “When we see an opportunity that we think is a good one, we’ll exercise our co-investment right and get it done. I don’t think it’s going to be common, but I think it’ll happen on occasion. At the end of the day, my job as CEO is to create greater shareholder value for our investors, and I think this does that, so we’re going to take advantage of it.”

The entire Fantex concept was met with great skepticism when French launched the company with its first client, Houston Texans runningback Arian Foster. It didn’t help the fledgling platform’s outlook when Foster injured his back and Fantex had to delay its planned Foster I.P.O., launching with Davis, arguably a lesser name, instead. (It has yet to take the Foster stock public, but says it will.) That skepticism remains, but by various metrics, Fantex has proven its model and is working. For one thing, it is continuing to attract athletes: it has signed eight of them (all football players) and debuted stocks for four: Davis, E.J. Manuel, Mohamed Sanu and Alshon Jeffery. (As we wrote last month, though, there isn’t much daily trading activity yet.) It has also paid out two dividends to Vernon Davis investors, and on April 28 will pay a third, of 50 cents per share, bringing the total dividends to $1.50. That’s a 15% yield on the I.P.O. price of $10.

That makes it hard to dismiss Fantex stocks as a mere souvenir or symbolic purchase. Indeed, French believes some of the early skepticism has faded, and that many Wall Street doubters have changed their minds. “I think Fantex years and dog years are similar,” he says. “To have people hear now that we actually are exercising this right [to co-invest], and that in the past year we’ve paid out $1.50 on the $10 IPO, hopefully people will start seeing this less as a novelty and more as a real asset class. It brings an opportunity for people to diversify their portfolio. But clearly I’m biased.”

The news of the third Davis dividend, and the Jamba Juice investments, comes exactly one year after the Vernon Davis I.P.O. Buck French sat down with Fortune to discuss the state of his company and how he feels things have progressed after one year. Here’s an edited transcript of parts of the conversation.

Fortune: In a very basic sense, the guys whose stock prices are up right now had good seasons, and the guys who struggled on the field, their stocks are down. So, is the system working? Do you see it that way?

Buck French: Well, I don’t think people are fully factoring in yet what is really relevant to potential impact on cash flow, vs. just the emotional. If you look at what their implied value is, which we show on the web site, you could make judgments about whether you think someone will earn that or more in the future. If you map the growth of the NFL salary cap vs. the S&P 500 or a commodities index, it has outpaced it completely. Or, Major League Baseball team payrolls, that outpaces the NFL. So our whole premise of doing this is not, ‘Oh, it’s cool, watch your favorite players,’ it’s a smart asset class. Why is the L.A. Clippers worth $2 billion? Because what’s happened is media has fragmented, and sports is the last place where you can have mass eyeballs watching at once. And that’s why you have these massive broadcast deals.

Right—it’s like sports leagues are recession-proof. The team values, the individual athlete contracts, all of it.

That’s why it’s a non-correlated asset class. It’s not correlated to GDP, it’s not correlated to your existing portfolio you have at E*Trade or wherever you have it. Now, there’s risk… but from a finance perspective, it’s really cool. I think that gets lost right now because people are like, ‘Oh, it’s professional athletes.’ But if you look at the underlying principle, it’s all about cash-flow. We’ve paid out a buck a share already on Vernon.

You stress the financial viability, but I would bet many of the investors are still people who are football fans and just see it as being similar to owning a “share” in the Packers.

Well, we have investors who cross from the one share, “it’s just kind of cool,” to the hardcore investor. We have people who buy hundreds of thousands of dollars of shares in an offering. Many of them are in New York, and their premise is this: “I don’t really care about the stock price.” If you buy a basket, it’s going to yield, so you’re going to offset any single point of failure risk. So if E.J. doesn’t make it, but I’ve got a Vernon, an Alshon, a Mo [Sanu], the yield, even if he doesn’t make it, if you pay out dividends, this is going to yield in the mid-teens. So now as we continue to add players, with our goal of diversifying across many sports, like any asset class, you would never buy one, you’d buy a basket.

Except that right now you can’t really do a diverse basket—it’s all football players.

Sure. But… in a sector, let’s say tech, I’m not going to buy just Apple. Same thing here. The whole point [eventually] is, if I’m going to put $200,000 of my overall portfolio towards Fantex securities, I probably want to have 50 grand in football, 25 grand in baseball, some in golf…

So you still have plans to sign other athletes in other sports. But most of the guys you’ve signed so far have been pretty minor names. It’s going to be hard for you to get big names, because if someone is already big and has an established brand, it’s not worth it to him to give Fantex a percentage of his future earnings, right?

It depends how big of a name you’re talking about.

Well, it’s not worth it [for them], but also, as great a player as they are, usually by the time they get there, they’re on the back side of their earning potential.

So they’re not as interesting to you, either, you mean?

Correct. Now, you talk an Andrew Luck, or a Russell Wilson, we would love to have them, but those guys probably aren’t going to do it either.

When you look at players you want to sign, what are the deciding factors?

We have a filter: first and foremost is character. We take a look at their backgrounds, who their agents are, and look, you won’t nail it 100% of the time, but there’s a certain percentage that, when you look at their background and who their advisers are, you know to stay clear. That’s filter one. Then filter two is, What is their potential, both on the field and off the field? We really don’t care about position, per se. It’s factored into the valuation. We’re position-agnostic,

Well, sure, position-agnostic, except that a quarterback would be better than anyone else. You’ve got one, but he had a tough year.

At this stage in our business, sure. But quarterbacks are a double-edged sword, because it’s so high-profile. Look, I’m happy with E.J. Of course I would have preferred him not to get benched, but we’ve run the data and he’s got the potential still.

So, it’s been a year. Are Fantex skeptics being converted?

Oh, the skeptics… I remember when Twitter came out and people said, “Who’s going to use a 140-character messaging system, that’s stupid.” The natural reaction to newness. That’s why, to me, you just keep delivering. Just keep backing up what you say, and eventually, people come around.