NFL star Vernon Davis talks about being a stock 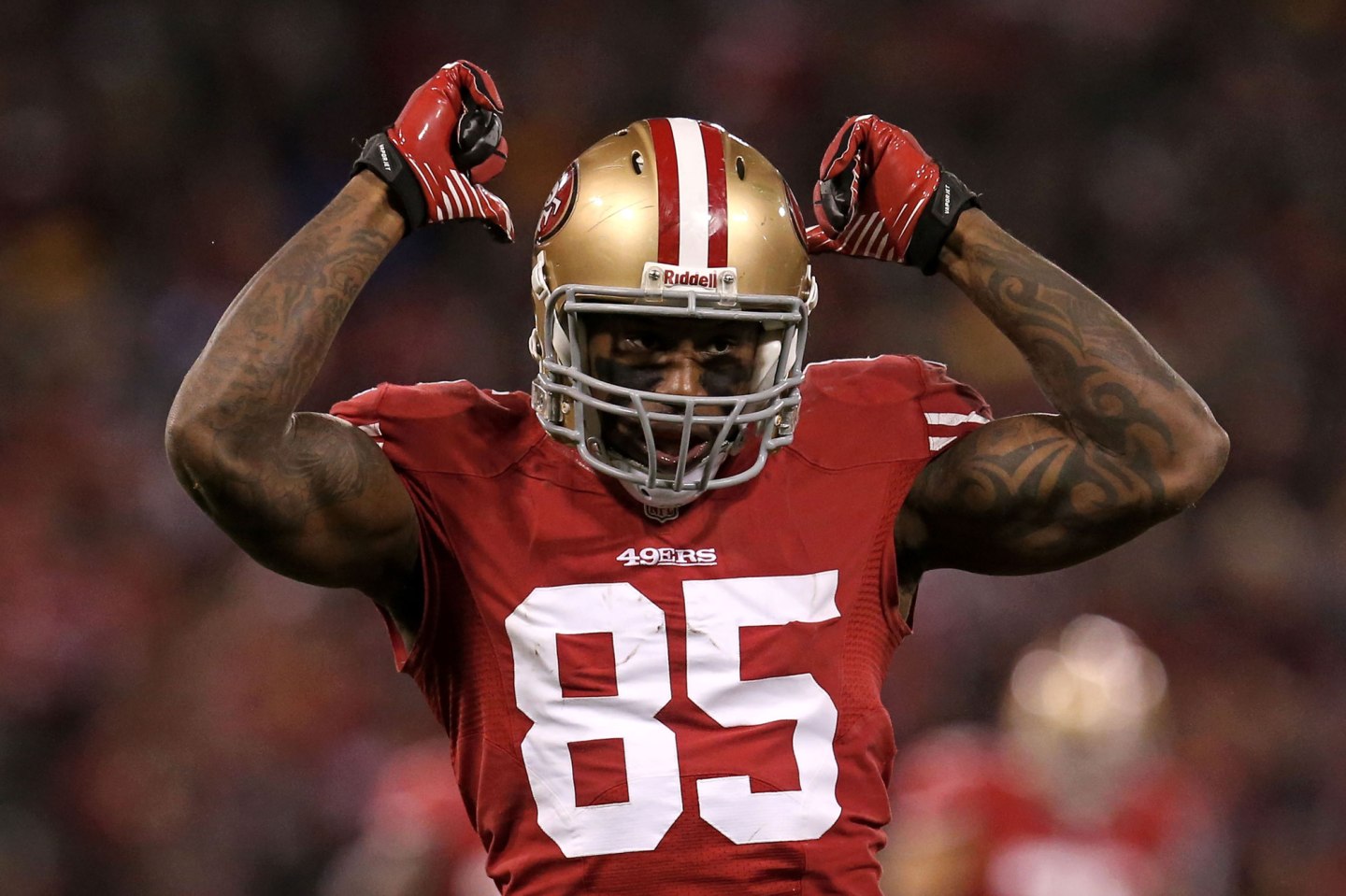 Vernon Davis is a stock now. And he believes that soon, “the whole world is going to believe” in athlete stock platform Fantex.

When Fantex Inc. first announced last year its plan to go public with “tracking stocks” that essentially let you trade athletes as equities, the media was fascinated and, in many cases, extremely skeptical of the idea. Many wondered what will happen and change in American sports if athletes become stocks.

The company’s initial plan was to launch with Arian Foster, the Houston Texans runningback, as the first stock, but a back injury and subsequent surgery made him a non-ideal candidate (and reminded all, in case anyone needed reminding, of how injury-prone football players can be and thus how risky of an investment one is). Fantex postponed the Foster IPO and instead went with Vernon Davis, the second athlete to sign on, as its debut stock.

That IPO succeeded. Fantex opened the Davis stock up for buying on April 28 at $10 per share, with 421,000 shares available, and it sold them all. Two other athletes have since signed up along with Foster and Davis, both of them fellow football players: Buffalo Bills quarterback E.J. Manuel and Cincinnati Bengals receiver Mohamed Sanu.

The way it works, in simplest terms, is this: in order to succeed, Fantex had to raise $4 million to pay Davis upfront in exchange for 10 percent of all his future earnings. (Its plan for Foster, a bigger star, was to pay him $10 million.) One way of looking at it is that Fantex is investing in the athlete’s future marketability, while those who buy shares of the tracking stock are investing in Fantex.(Fantex cautions on its web site, “This tracking stock… is not a direct investment in that athlete or brand contract. It represents an ownership interest in Fantex, Inc.”)

Hypothetically, the stock should fluctuate based on how strong the market perceives Davis’s brand to be, although there may not be much exciting market volatility here; it is difficult to think of what factors, beyond on-field performance or injury, would cause the Davis stock to move. (Indeed, on Wednesday afternoon, as Davis was making the media rounds, the stock was flat at $10, same as the April opening price; the peak price the stock has reached since its debut is $12.50.)

Whether Davis or Fantex is the one getting the better deal out of this depends on what you think Davis, at 30 and entering his ninth year in the league, could stand to earn in the future. By signing over 10 percent of his future earnings to Fantex, Davis gets the immediate cash, but Fantex gets the potential.

On Wednesday, Davis and Fantex CEO Buck French stopped by the Fortune offices to talk about the controversial model and their thinking behind it.

Here is an edited transcript.

Fortune: Vernon, why did you agree to sign on with Fantex, what convinced you?

Vernon Davis: I did it because it makes a lot of sense. If I’m a guy trying to build my brand, then this is a smart thing to do.

How did you first hear about it?

Davis: My agent told me about it.

Buck, do you approach agents and ask them which client of theirs might be good for Fantex, or do you specifically select players and then contact the agent?

Buck French: Both. We ask the agent whether he thinks this fits Vernon’s image. The agent, they’re the trusted adviser. But at the end of the day, we become part of the athlete’s team. Where we fit into the picture is there’s no one looking at the overall brand.

Vernon, we’re always hearing, from those who do succeed in business after retirement, that not enough athletes set up or prepare sufficiently for the time when sports will end. Was part of this for you about setting something up for when you eventually retire?

Davis: You could say that. I just believe in setting up for the future now. Now is the time.

Once it was announced that you were participating in Fantex, did your teammates aske you about it and have a lot of questions?

Davis: Well, I wasn’t allowed to talk about it at all because of SEC requirements. So I’d hear some guys talking about it on the bus or in the locker room, and I would just laugh and I couldn’t say anything.

That’s got to be the first time in the locker room a player has ever said the phrase “SEC quiet period.”

French: I would venture to say that’s spot-on.

The whole idea of Fantex has met with a lot of skepticism—many people think it’s weird or won’t work. Did you consider those things or care about the criticisms?

Davis: Well, you have to expect that everyone’s going to have their doubts. But I believe in it, and I think soon the whole world is going to believe in it. I had to do my due diligence, weigh the pros and cons, the risk and reward, and once I did it started to seem like a no-brainer.

Buck, how do you react to the criticism or doubts about the company?

French: We just deliver. It’s easier to throw stones instead of just saying, ‘Wow, this looks cool and interesting.’ People say, ‘Ohh, this is a Ponzi, this is a scam, blah blah.’ And they seem to be the loudest on Twitter. But we just deliver.

And why, so far, have you chosen football, a sport where contracts aren’t guaranteed and where injuries are common?

French: Look, the NFL is the #1 sport in America… he is recognized everywhere he goes. That is not happening in other sports, in general. The average playing career of a player who makes one Pro Bowl is 11.7 years. So the reality is, good football players will play for a while.

Did you have to get approval from the league, or talk to them about Fantex?

French: I’ve never talked to Roger Goodell. But we talk extensively to the players’ association and DeMaurice Smith. When we announced Vernon, the 49ers tweeted it out. I think from a team perspective, it helps the team’s brand too. As for the league, my guess is they’re waiting to see if we survive, to be honest. That’s purely my own speculation. Remember that they were against fantasy football at first. They don’t need to be early on us.

And Vernon, did you have to make sure to tell your preexisting sponsors and brands that you have deals with, and get their approval?

Davis: I talked to most of them, and they were fine with it.

Who are your sponsors, currently?

With Jamba Juice and D1, you’re not an endorser but an owner, right? Do you own a gym?

Davis: I own a D1 gym and I own a Jamba Juice location. With all my deals, I try to get some amount of equity.

That does seem to be the new model these days. Athletes, more and more, are choosing to get equity in a smaller venture than just get paid a fee to endorse a product, right?

Davis: Yeah. I tell them, ‘keep your cash, buddy!’

Were you hesitant to sign on due to any fears about legal action Fantex could take against you, like if you break your agreement with them?

It’s interesting you mention getting in trouble. Now that you’ve signed on to Fantex, do you worry more than before about your image?

Davis: I’ve always been strict when it comes to my image. I really take it one day at a time, I try to be really honest and kind to everyone, and I don’t get in trouble.

French: Part of our due diligence, too, is the character element. We get to know the guys. We want good human beings. Our brand is linked with his brand now.

But how can Fantex really help with his brand, beyond doing the IPO?

French: Everyone knows him as a football player. We want people to know him as a person. Because his football brand is not sustainable. That will end. His brand as a person is sustainable. We worked with Vernon to figure out what his brand is, and it’s transformational. He owns a Jamba Juice, he owns a D1 Sports, but he was also an art major in college. Now he owns an art gallery and now he’s a philanthropist and uses art to help raise money for kids.

Vernon, which football player do you think has done it right, whose post-retirement career do you most want to emulate?

Social media plays a big part in this whole effort to create your brand. Do you enjoy social media?

Davis: I dream about it at night.