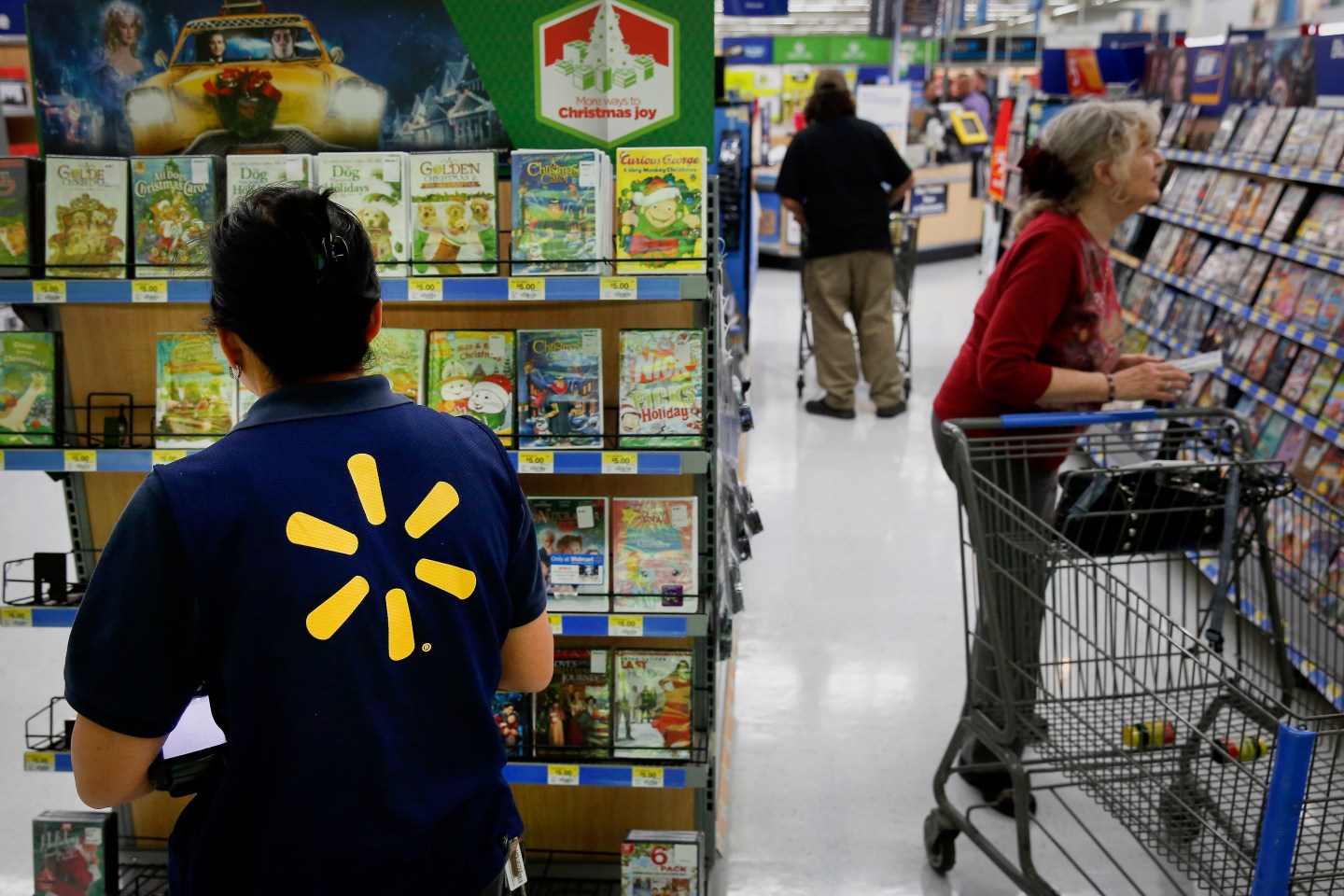 An employee organizes movies for sale at a Wal-Mart Stores Inc. location ahead of Black Friday in Los Angeles, California, U.S., on Monday, November 24, 2014. Retailers are planning to open earlier on Thanksgiving day this year in a bid to draw shoppers. Wal-Mart Stores Inc. is making Black Friday, the shopping day after Thanksgiving, a weeklong event this year. Photographer: Patrick T. Fallon/Bloomberg via Getty Images
Photograph by Patrick T. Fallon — Bloomberg via Getty Images

Wal-Mart Stores said on Friday it will eliminate a layer of management inside its 4,500 U.S. stores to reduce bureaucracy, improve customer service, and give front-line workers more input into how their section of the store is run.

The world’s largest retailer by sales plans to cut the position of zone merchandising supervisor, a manager who oversees several departments within a store. Affected workers, typically six per store, will be redeployed to other roles within store.

A Wal-Mart spokesman said the changes, first reported by Bloomberg News will to be implemented by this summer and will not result in a headcount reduction.

The move comes as the CEO of Wal-Mart’s U.S. division, Greg Foran, has pledged to make shopping at Wal-Mart more appealing, an important task given how delicate the recovery in shopper traffic trends has been for the retailer in recent months. Foran, who took over the $280 billion a year U.S. business last year, recently told Wall Street analysts that “we have recently undertaken some important activities to simplify our organization and empower our stores, our associates in our stores to make decisions.”

The zone manager job was created a few years ago under the theory that it would improving efficiency. Instead, the retailer has found that workers, who interact with shoppers all the time, felt they had less influence in the day-to-day management of the stores. “This is to give associates ownership of their store,” Wal-Mart spokesman Kory Lundberg told Fortune.

The management structure change was telegraphed by Wal-Mart CEO Doug McMillon in an open letter to employees in February in which he announced pay increases for some 500,000 Wal-Mart (WMT) workers out of its 1.3 million U.S. employees. The pay hike was seen as a reaction to the difficulty in retaining good workers, who can ensure better in-store service amid a tightening job market.

“We’re also strengthening our department manager roles,” McMillon wrote at the time, noting that the starting wage for some of those jobs would be at least $13 an hour this summer and at least $15 an hour early in 2016. “There will be no better place in retail to learn, grow, and build a career than Walmart,” he continued.

Wal-Mart’s U.S. comparable sales have begun to tick upward again, with two straight quarters of modest growth after nearly two years of poor performance. But Foran and McMillon have each acknowledged that to build on that, the retailer needs to improve the in-store customer experience, its grocery selection (more than half of Wal-Mart’s U.S. sales are grocery), and how its stocks its shelves.

Separately, the retailer is abruptly closing five stores for a few months, blaming plumbing problems. One of the stores, in Pico Rivera, Calif., near Los Angeles, has been the site union organizing, leading some to surmise the move was retaliatory. The company said there was nothing more to it than the need to do repairs.

For more about Wal-Mart, watch this Fortune video: