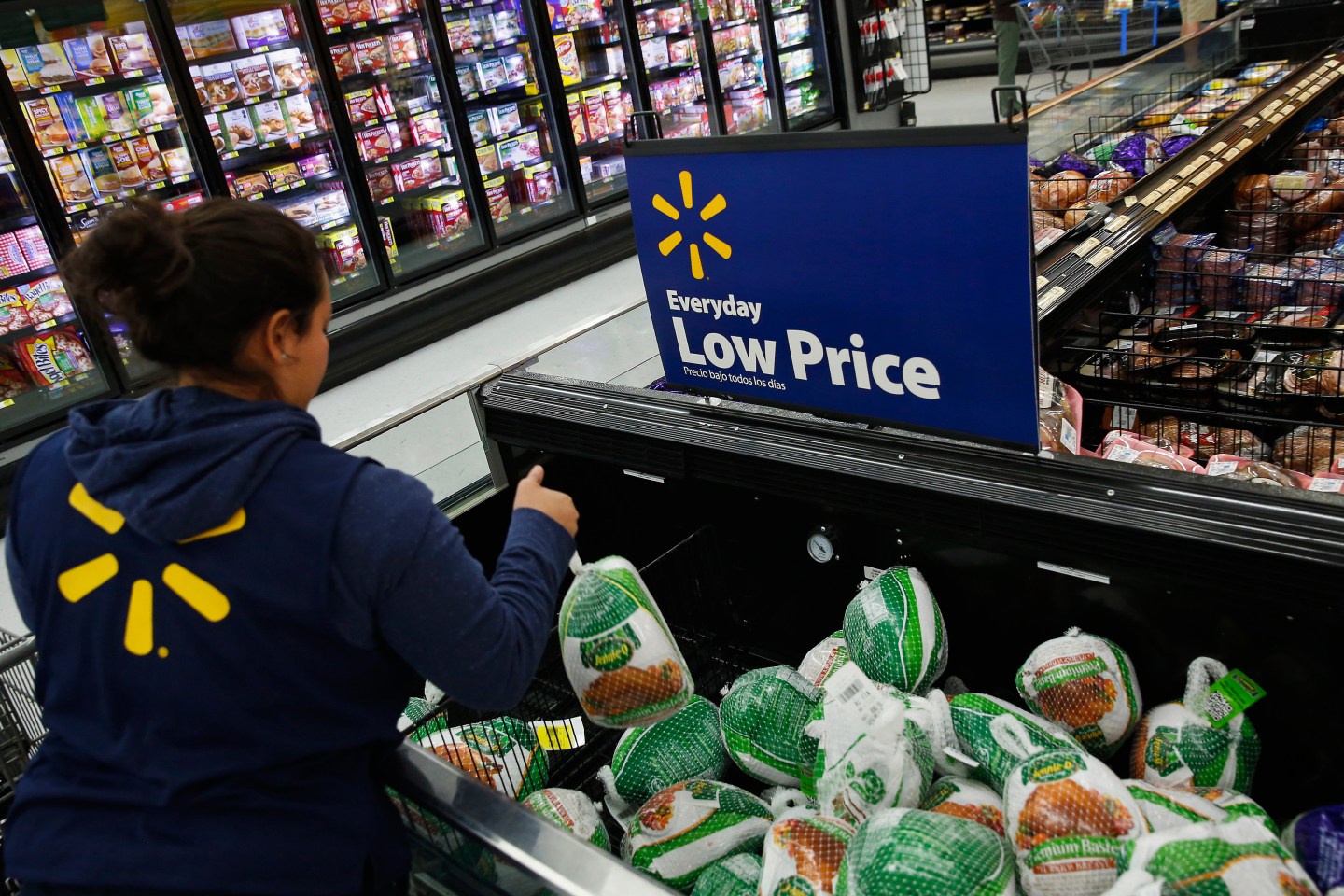 An employee arranges frozen turkeys displayed for sale at a Wal-Mart Stores Inc. location ahead of Black Friday in Los Angeles, California, U.S., on Monday, November 24, 2014. Retailers are planning to open earlier on Thanksgiving day this year in a bid to draw shoppers. Wal-Mart Stores Inc. is making Black Friday, the shopping day after Thanksgiving, a weeklong event this year. Photographer: Patrick T. Fallon/Bloomberg via Getty Images
Photograph by Patrick T. Fallon — Bloomberg via Getty Images

Wal-Mart Stores (WMT) acknowledged last year that it had big problems to solve in its U.S. grocery business. Customers thought its fresh food was unappealing and often found empty shelves because of problems in the supply chain. Furthermore, rivals had started to undercut the retail giant on prices.

In the fall, Wal-Mart issued an “urgent agenda” memo to its U.S. store managers, setting guidelines aimed at boosting sales of “chilled and fresh” food. But that was just one part of Walmart U.S. CEO Greg Foran‘s big push to improve the in-store experience for shoppers at a time of tough comparable store sales for a division that brought in $288 billion in revenue last year, or 60% of the company’s overall.

Walmart U.S. has cobbled together two straight quarters of comparable store sales growth while more shoppers came into its stores during the holiday quarter, breaking a nearly two-year streak of declines.

But Foran, who became Walmart U.S. head last summer after heading the Asia division, has frequently said the retailer has a lot of work to do to make sure that renewed growth holds. That is all the more challenging because of how aggressive Target (TGT) has been on product selection and pricing, and how quickly dollar stores like Dollar General (DG) have expanded and encroached on Walmart’s turf.

This week, Foran was in New York to update Wall Street on Walmart’s progress at its stores, so that “by the time we hit holiday season, our stores are clean, tidy, well-merchandised and run by engaged associates.” Walmart is not there yet, he hastened to add.

Here are a few takeaways.

1) Improving how quickly products go from the backroom to shelves

That might seem basic, but Walmart has suffered some from avoidable out-of-stock problems, or conversely, merchandise that could have been sold but wasn’t.

“Our inventory quantity and flow can be better,” Foran said. “We’ve got too much inventory in the back rooms and our processes are not where we want them to be. And that is causing some undue shrinkage (product that could have been sold but wasn’t) and some out-of-stocks.”

Part of the trick is also to make sure no to over-order, particularly with perishable items. “If we then run less inventory in the store, the customer benefits because when they buy that product, they get it home and it lasts for five or six days.”

In the autumn, Walmart told managers to be sure to discount fresh food like meat that was nearing expiration with a goal of selling them before their expiration date so as not lose out on sales. They also said not to offend customers by asking full price for items they had little time to use.

“We estimate this markdown initiative alone is delivering a retail run rate saving of over $500 million annually,” said Foran.

3) More to do on having the lowest prices

Walmart has not always offered the lowest prices for certain products, a problem for a retailer whose major attraction are bargains. Foran said the company needs to beef up its price advantages.

“Whilst we have pockets of leadership, in more competitive markets, our gap is too small and against some competitors, we are beaten,” he said. “What is more, we lost a little bit of our muscle for reacting quickly.”

The Wall Street Journal earlier this week reported that Walmart was squeezing its suppliers even more to lower costs, something Foran indirectly suggested was normal. “Really difficult to have low prices unless you have low costs.”

Foran admitted Walmart has been “slow” to fully take advantage of using data in choosing the most appropriate selection of merchandise. (Target CEO Brian Cornell detailed how key data is to his company’s turnaround in a Fortune feature in February.)

“We have lost some of our muscle in building a customer-relevant assortment,” Foran said. But Walmart is rolling out much more data-driven merchandise selection in the next 18 to 24 months.

5) Delis and bakeries at all new Neighborhood Market grocery stores

While Walmart’s small format stores, Neighborhood Market, which is heavily focused on groceries, have seen much higher comparable sales growth than the big-box stores, McMillon and Foran have made clear they can do better.

“All Neighborhood Markets in the future will open up with a bakery and a deli because we absolutely believe that is important for the future and we are looking at how that looks and how that feels,” Foran.

Wal-Mart’s next quarterly report will be released May 19, so investors will have to wait for proof that things are improving. But Foran has in any case made it clear that all these moves are steps on the way to his vision of the Walmart of the future:

“Let’s play it forward two to three years. You enter a Walmart Supercenter. It is light, it is bright and it’s large. You are struck by the ease by which you can see where you want to find what you want and where you need to go. The fruit and vegetables are tempting, the color vibrant – as is the rest of fresh and you easily navigate through the store. The items are relevant and merchandised effectively and attractively. Associates work the product and are easily identifiable and are helping customers. It is clear that prices are a source of pride and are sold without any gimmicks.”