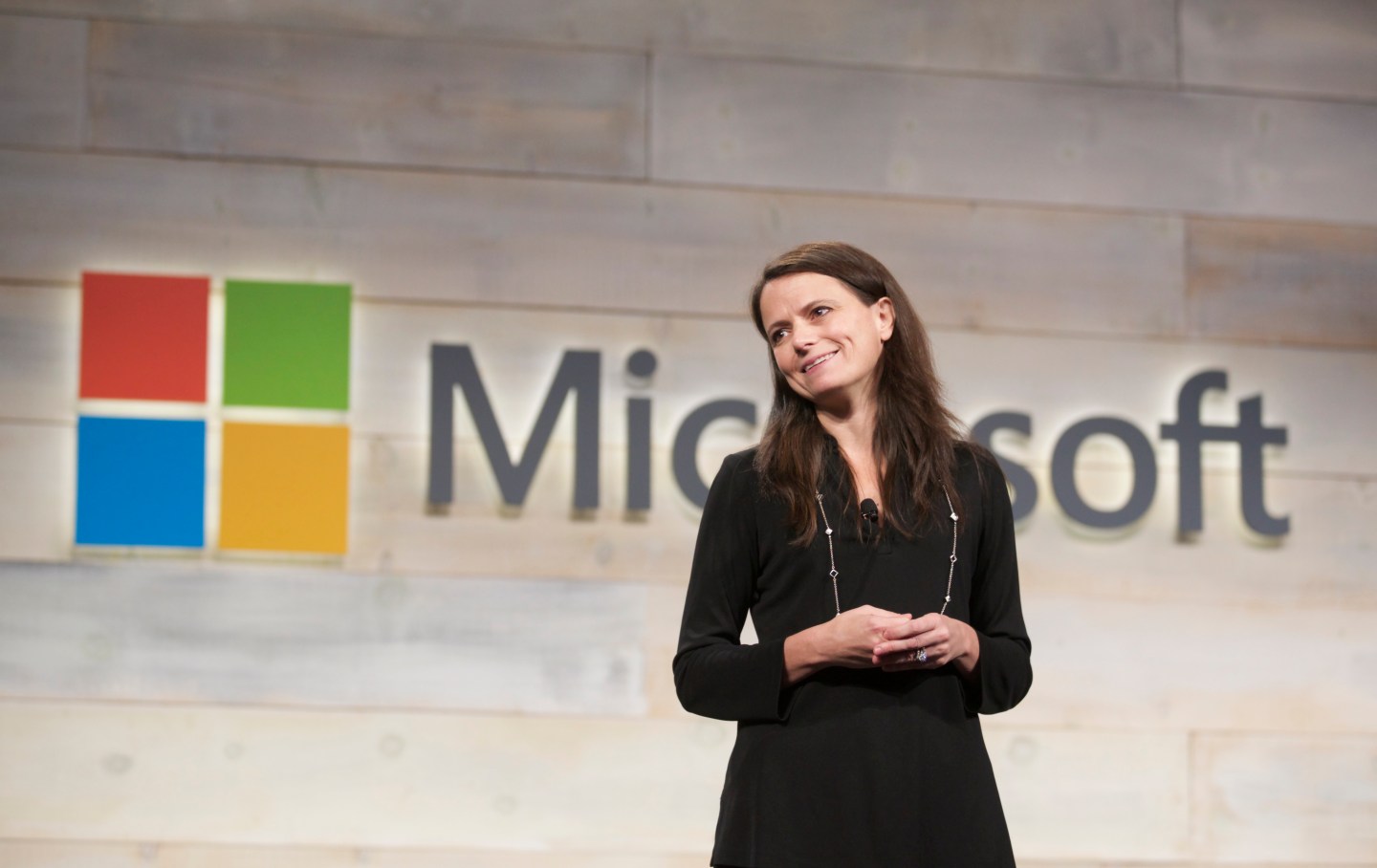 BELLEVUE, WA - DECEMBER 3: Microsoft CFO Amy Hood addresses shareholders during the Microsoft Shareholders Meeting December 3, 2014 in Bellevue, Washington. The meeting as first without Steve Ballmer as the company's CEO and the first without Bill Gates as the Chairman of the Board. (Photo by Stephen Brashear/Getty Images)
Photograph by Stephen Brashear — Getty Images

What do Bed, Bath & Beyond, JPMorgan Chase, and Goodyear Tire & Rubber have in common? They all have women chief financial officers.

There are now 58 female CFOs serving at Fortune 500 companies, according to a Fortune analysis in collaboration with S&P Capital IQ. The list is based on the latest available data in the S&P Capital database as of early February. While that’s 14 more than in 2010 when nonprofit research firm, Catalyst, conducted a similar count of the Fortune 500 and 30 more than in 2000, the number of women CFOs at America’s largest corporations has risen by just one more since 2013.

Female finance chiefs still make up a paltry 11.6% of the total. Looking at it the other way, almost 90 percent of Fortune 500 CFOs are men. For some, the acceleration rate seems closer to that of a Model T than a Tesla.

“It’s very frustrating to see the needle move so slowly after so many years,” says Naomi Sutherland, a senior partner in the diversity and inclusion practice at Los Angeles-based executive recruiter Korn Ferry. “Consciously or subconsciously, companies are still hesitant to take the risk on someone who looks different from their standard leadership profile. And when the candidate looks different and acts differently than the people around you who have been successful, it may feel like a risk to go with the woman.”

What makes the painfully slow progress even more puzzling is the body of research conducted over several years by organizations like McKinsey & Co. that suggests companies actually perform better when their senior leadership represents a larger and more diverse pool of candidates. In January, McKinsey released the latest results that show companies in the top quartile for gender diversity were 15 percent more likely to have financial returns above the national median for their industry; those with racial and ethnic diversity were 30 percent more likely. The research was based on earnings before interest and taxes from 2010 to 2013.

Having more women on boards and in senior management also may keep companies out of legal and ethical trouble. According to Wake Forest University and University of North Carolina-Wilmington researchers, female CFOs are less tempted to employ riskier tax-avoidance measures and other potentially illegal tactics to eek out a little more profit. Of course, that doesn’t mean women make better CFOs than do men. But the researchers contend that male CFOs are more driven to attain money and power and therefore more tempted to cut corners.

The study also notes that having one or two token women in management isn’t sufficient to dissuade male-dominated boards; women need to make up at least 30 percent of the board to make a difference.

Women CFOs, like men, most often come to the job through accounting, cash management work for corporations, or investment banking work on Wall Street. Many don’t have business unit leadership experience. Yet, from the position, a few notable women have gone on to lead organizations, including Safra Catz, who was the highest paid CFO before becoming the co-CEO of Oracle Corp. (OCLCF)at the end of 2014, and Lynn Good, who became the CEO of Duke Energy Corp. (DUK) in July 2013.

Bryan Proctor, head of Korn Ferry’s CFO Practice, notes that only 7.5 percent of both male and female CFOs move up to the chief executive office, although far more are starting to make it to the short lists for the top job.

Even for men, the job doesn’t necessarily offer long-term security, with the average tenure of a sitting CFO, regardless of gender, being between five and six years. That’s according to studies by EY and Spencer Stuart.

For women, the pressure can be especially intense. Promotion to any C-suite job pushes female executives into a predominantly male world in which she stands out. Trip, and everyone is watching. This month at Kraft Foods Group(KRFT), the arrival of a new CEO precipitated earlier this month the departure of the management team’s two most powerful women—CFO Teri List-Stoll and CMO Deanie Elsner. Veteran Kraft executive James Kehoe was brought back to the company to take the CFO slot; the CMO job remains open. That leaves three females still standing on what is now a 14-person management team.

Despite the rough terrain any CFO must traverse, a handful of female Fortune 500 CFOs have been on the list for a decade or more, including Carol Tomé, who became CFO at The Home Depot (HD)in 2001, Kathleen Quirk, CFO since 2003 at Freeport-McMoRan Inc.(FCX), and Judy Bruner, CFO since 2004 at SanDisk Corp. (SNDK)(See the full list here.)

The longest-sitting CFO among the Fortune 500 ‘58’ is Glenda Flanagan. In 1988, when Whole Foods (WFM)had just six stores, Flanagan knew the retailer’s controller, and he recommended her to come in as finance chief after a search firm failed to find any female candidates. Flanagan helped build Whole Foods into a giant, including taking it public in 1992. Whole Foods joined the Fortune 500 in 2005.

Here are the stories of 5 other women CFOs.

Pat Wechsler is a veteran business reporter who has worked for Business Week, Bloomberg and Newsday. For seven years, she was editorial director of Treasury & Risk, a magazine and conference franchise for Fortune 1,000 CFOs, treasurers, controllers and senior finance officers.

Amy Hood is the first woman CFO at Microsoft(MSFT), and Wall Street analysts portray her as CEO Satya Nadella’s critical partner in the transformation of the company to a devices and services enterprise. Hood started at the company in 2002 and was instrumental in many of Microsoft’s recent acquisitions, including Skype Technologies S.A., its largest.

Analysts have praised Hood, a former Goldman Sachs banker, for her cost-control savvy and ability to communicate with investors. One of three women on the 15-person senior leadership team, Hood was appointed in May 2013 and is still in her early forties.

Teresa Gendron hopscotched companies to end up being appointed CFO of Leucadia National Corp. in September 2014. Prior to joining the New York-based conglomerate, Gendron spent almost three years as the chief accounting officer for Gannett Corp., the largest newspaper publisher in the U.S.

Not many executives could make the jump from CFO of cosmetics company Avon Products Inc. to oilfield services giant Baker Hughes Inc. (BHI)Then again, Kimberly Ross is not your average CFO. Ross has gone from firestorm to firestorm in her years as a top finance officer, beginning with Dutch food-services giant Royal Ahold, where she played an influential role in reviving the company’s finances amidst an accounting scandal and investigation.

She then jumped to Avon, which also was in financial turmoil as longtime CEO Andrea Jung exited. At Baker-Hughes, Ross, who will turn 50 this year, again faces cost-cutting prospects as her new company merges with rival Halliburton Co., a $34.6 billion deal expected to get a lot of federal regulatory scrutiny. Ross started as CFO in October 2014.

For 27 years, Kathy Waller worked her way up the corporate ladder at The Coca-Cola Company until in April 2014 she was tapped to become its new CFO. Since 2007, one of her missions for the Atlanta-based beverage company has been to work for gender parity by 2020. The 56-year-old Waller, an accountant by training, is leading Coke’s award-winning global women’s initiative where she focuses on the business case for bringing more women into the company’s workforce.

So far, Coke (KO)has shown double-digit gains in the number of senior-level positions held by women, but as Waller has said, she also likes to focus on the pipeline to ensure an adequate pool will always be there. In a 2012 interview, Waller had one piece of advice for female executives: “You have to speak up and let people know you’re interested so you can be top of mind if something opens up.”

Cisco Systems Inc. (CSCO)CEO John Chambers warmly greeted his latest CFO, Kelly Kramer, last November with these words, “Don’t mess up.” Given the less than rosy outlook for the once high-flying tech services provider, they’re not words a new CFO is likely to laugh off.

One of the newest of the Fortune 500 female CFOs, Kramer began her new job on Jan. 1. She will need to contend with a crowded competitive landscape and cost-cutting environment. Then again, Kramer cut her teeth at General Electric Co., spending two decades with the company in various finance and business roles. Like all GE alum, she gets the benefits of partnering with business units and skilled at trimming the fat when necessary.