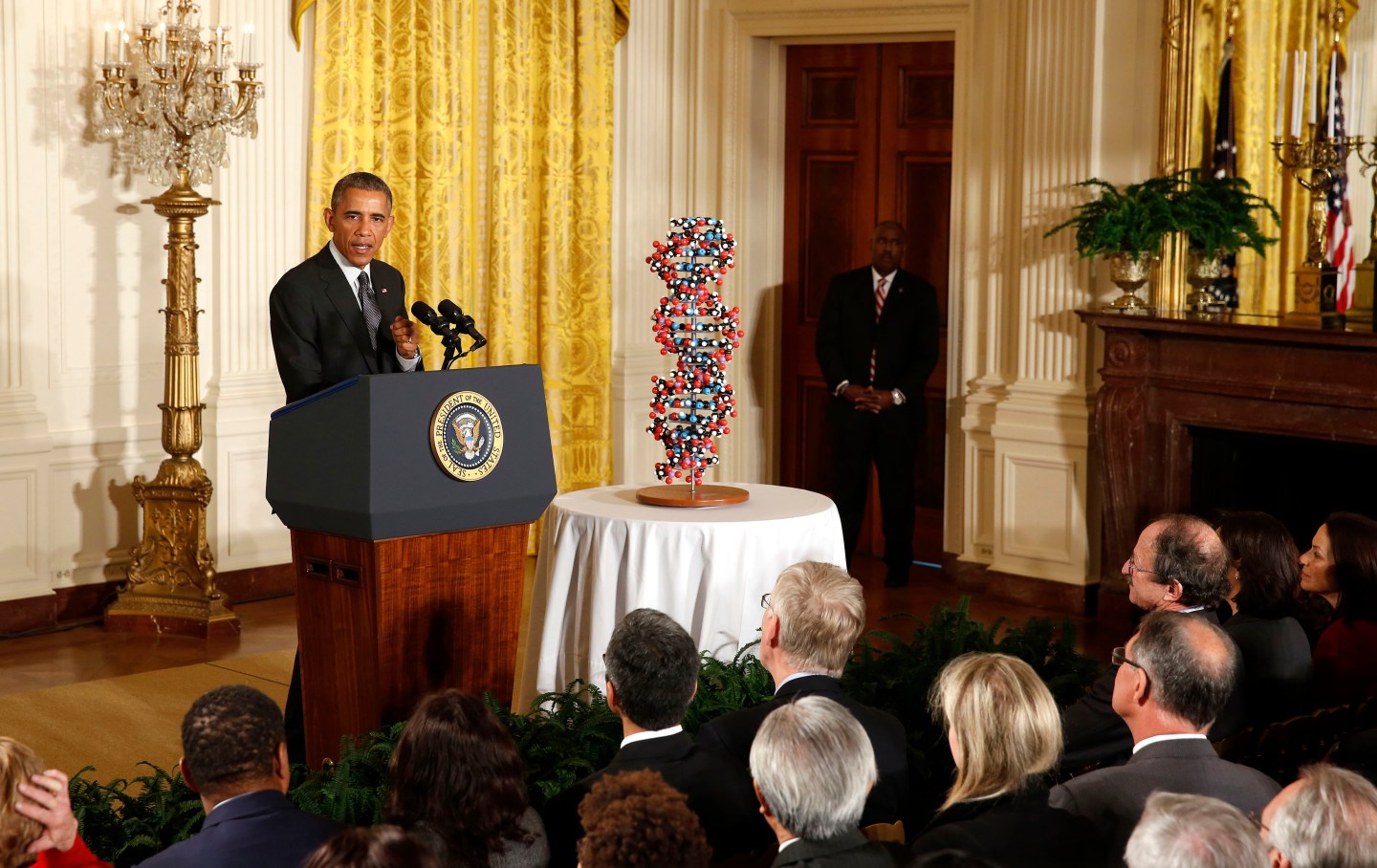 U.S. President Barack Obama talks about investments to improve health and treat disease through precision medicine while in the East Room of the White House in Washington January 30, 2015. A 17 base pair DNA model is next to Obama. REUTERS/Larry Downing (UNITED STATES - Tags: POLITICS HEALTH) - RTR4NN2Y
Photograph by Larry Downing — Reuters

The plan involves collecting and analyzing the genetic data from more than 1 million American volunteers in order to deepen the breadth of genetic data that could be used to better understand how diseases affect people, and how medicines could better target and treat those illnesses.

President Obama initially previewed the Precision Medicine Initiative in his State of the Union address last week, saying that he wants “the country that eliminated polio and mapped the human genome to lead a new era of medicine — one that delivers the right treatment at the right time.”

Obama earmarked $215 million in his 2016 budget proposal to kickstart the effort, including $130 million for the National Institutes of Health to create a national research database to collect a wide range of health data, including volunteers’ genomes.

The goal is to create a data-rich, searchable database that would allow researchers to better pinpoint the sources of diseases and create individually-tailored treatment plans. The new effort will “bring us closer to curing diseases like cancer and diabetes  —  and give all of us access to the personalized information we need to keep ourselves and our families healthier,” Obama said.

Kathy Giusti, founder and executive chairman of the Multiple Myeloma Research Foundation, says that we have only “scratched the surface of what is possible” when it comes to precision medicine, and “the successes to date are life-changing for those who benefit, and have laid important groundwork for similar approaches across all cancers.”

Researchers have worked for several decades to understand the underlying basis of diseases and develop medicines targeted to the genetic profile of individual patients. This movement is known as “personalized,” or “individualized” medicine.

It requires reams of data to compare how specific diseases are expressed across different patients, or even how healthy patients avoid certain diseases. For instance, certain research labs are studying DNA from healthy volunteers and looking for rare genetic outliers that actually protect against disease rather than lead to illness. Those good genetic outliers could point to treatments for the rest of us.

In one case, researchers found that people naturally missing working copies of a gene known as PCSK9 had almost no bad cholesterol in their blood. Scientists used that insight to develop drugs that block the PCSK9 gene in order to lower cholesterol. It worked. Two such drugs are nearing the Food and Drug Administration’s approval, and studies have found that they help lower cholesterol levels, sometimes by as much as 75%.
[fortune-brightcove videoid=3957338558001]

Large-scale genomic studies are possible today because of the lower cost and time needed to sequence a genome. It costs about $1,000 to analyze one person’s DNA — a fraction of the nearly $3 billion it cost to decode the first human genome 15 years ago.

The White House’s initiative calls on the National Cancer Institute, the FDA and the Office of the National Coordinator for Health Information Technology to all play a role in the effort to create and maintain this new database. President Obama is also hoping that the private sector, including universities and foundations, will get involved to “lay the foundation” for the initiative.

The NCI will use the genomic data to create a new cancer knowledge network that will specifically focus on advances in the prevention, diagnosis and treatment of various cancers.

READ MORE: Obama’s push for a huge genetic biobank, and what it means for your health.