The next space race will be among Fortune 500 companies 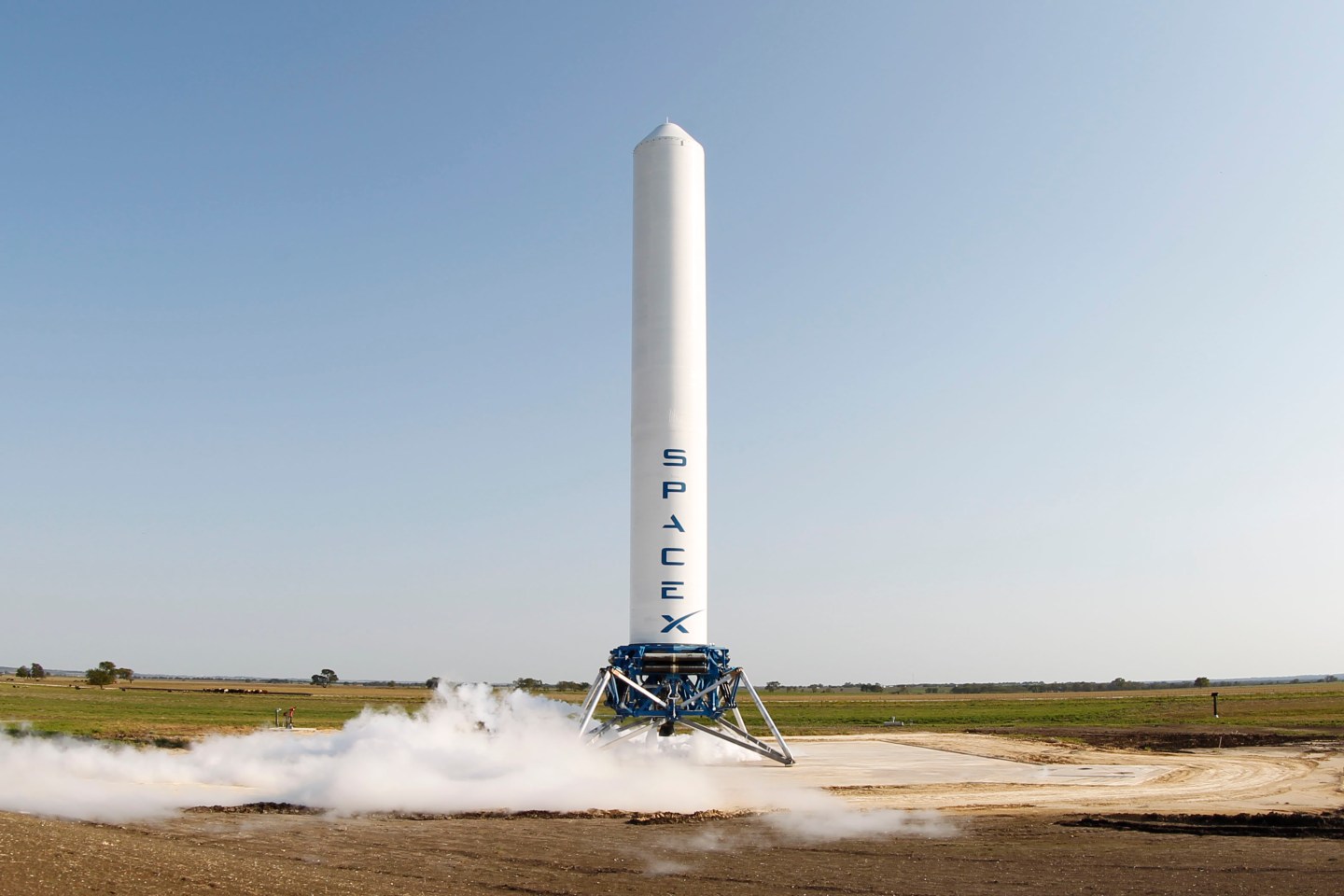 SpaceX's Grasshopper, a 10-story vehicle that the company is using to test rocket reusability.
Courtesy of Chris Thompson/SpaceX

Behold the words of SpaceX founder Elon Musk, offering a post-op summary of the fiery crash-landing of one of his company’s first stage rocket boosters aboard a floating barge in the Atlantic earlier this month. It smacked of the billionaire entrepreneur’s typical comedic understatement. Video accompanying the comment, delivered in a tweet, shows the rocket coming in too fast and too steep before exploding in a magnificent fireball. It was a far cry from the soft landing Musk and SpaceX had planned.

Most of the press called it a failure. Musk called it “close.” Experts familiar with the commercial spaceflight industry are calling it what it is: evidence that 2015 will be the year SpaceX manages to successfully bring a first stage rocket booster and its nine rocket engines safely back to Earth for reuse, potentially cutting the cost of space launch in half and upending the commercial launch industry.

But lost in the whiz-bang awesomeness of rocket launches (and crashes) is the way SpaceX’s reusable rocket technology could impact industries beyond those associated with space, such as telecommunications and imaging. The cost of space access could drop from its current range of between $65 million and $70 million to something more like $30 million, or even $20 million, putting it within reach of companies and industries that couldn’t consider it before.

“When launch costs drop, new customers will emerge,” says Dick “Rocket” David, CEO of space industry information provider NewSpace Global. “But most of the customers that will be interested don’t even realize today what impact access to space will have on their business models.”

SpaceX wanted to bring its first stage booster back to Earth for a simple reason: the rocket boosters that are typically jettisoned after their fuel runs out cost millions of dollars to develop and manufacture. If the company can return a stage to Earth intact for refurbishment and reuse, it can dramatically reduce what has long been considered a cost of doing business.

There remain questions: how much it costs to refurbish a rocket booster and how many times a single booster can be reused, for example. And space industry analysts think costs could go lower still. Musk has suggested that he’s eventually shooting for a sub-$10 million launch price. But merely halving the cost of launch could stoke increased demand for launch services and bring a flood of new entrants into the orbital domain.

How all this impacts the average Fortune 500 firm remains to be seen, but two things are almost certain to happen in the near term. First, the services that companies and individuals currently get from space will become better, less expensive, and more accessible, says Carissa Christensen, managing partner at defense, space, and technology consultancy Tauri Group. That’s not necessarily a groundbreaking development, but it’s certainly a meaningful one. Companies spend a whole lot of money on communications, imagery, and other data collected and relayed by orbiting satellites. In some industries, the high cost of satellite services keep smaller companies from competing as effectively with their larger counterparts. “Cheaper, cooler, and better things from space is kind of a big deal,” Christensen says. “The benefit of much cheaper satellite services is not trivial.”

Second, a huge number of new entrants and new dollars will pile into the orbital domain—and in fact already are. Just last week, SpaceX announced plans to build out a network of micro-satellites over the next five years that would blanket the globe in internet. This week the company announced that Google (GOOG) and investment bank Fidelity (FNF) have invested $1 billion in the project, valuing SpaceX at $10 billion. Another satellite internet startup known as OneWeb—launched by Google’s former satellite internet project lead, Greg Wyler, who left the company in September—also announced last week that it has secured funding from Richard Branson’s Virgin Group and Qualcomm (QCOM) to create a satellite network of its own. The $2 billion project plans to launch 648 small satellites weighing 285 pounds each starting in 2018, each of which will require a ride into an orbit.

Analysts are optimistic that space launch activity will create new opportunities that could in turn further boost investment in the space.

“Keep in mind that whenever you start launching more satellites, when you make launch services cheaper and bring new players into the market, you have a lot of spinoff effects,” Marco Caceres, director of space studies at aerospace and defense consultancy Teal Group. “You have an expanding market, you have submarkets. And you have investors taking a second, a third, a fourth look at companies like SpaceX and the ones that will follow. Venture capital will start flowing back into the market like it did in the 1990s.”

Emerging space companies are already baking lower launch costs into their business plans. Space is to the decade ahead what the Internet was to the 1990s, NewSpace Global’s David says. It’s not necessarily going to upend your revenue streams tomorrow. But if you’re not thinking about how space access impacts your business and how to leverage it to your advantage, you’re setting yourself up as the Barnes and Noble (BKS) to someone else’s Amazon (AMZN).

“The challenge is understanding the impact something like a reusable first stage booster will have upon a very terrestrial business model today,” NewSpace Global’s David says. “If you’re Coca-Cola, if you’re Walmart, if you’re Toyota, if you’re Lukoil—what does a satellite have to do with your business model today? What will falling launch costs have to do with your business model in the future? From our perspective, the companies capable of connecting those dots will be able to capture tremendous financial growth opportunities. Those who fail to understand that connection to their very terrestrial business models could end up on the wrong side of financial evolution in the next decade.”

Most companies don’t think of themselves as “space companies,” David says. But it’s hard to find a company on the Fortune 500 that isn’t intimately connected to terrestrial assets—real estate, agriculture, transportation infrastructure, energy infrastructure, brick and mortar facilities. The ability to connect all those assets in a proprietary way, to monitor them in realtime and generate accurate and instantaneous information about them will ensure a competitive edge for companies in the 21st century.

That’s especially true for firms who rely on fast, accurate information—and proprietary access to that information—to generate revenue. “Is it obvious that someone like BlackRock or Apollo would care about having their own satellites?” David says. “I think if you were to poll most PE firms and IBs on Wall Street they would say, ‘Space? You gotta be kiddin’ me.’ But what we’re going to see in the near term as launch costs come down, as more satellites are lifted, is an increase in knowledge at higher frequency. That’s going to lead to results that could change the very nature of financial analysis.”

Whether or not Stamford-based energy traders will soon find themselves jockeying for the choicest orbits from which to count oil tankers in the Strait of Malacca is anyone’s guess. But the takeaway from SpaceX’s most recent rocket recover “failure” is this: access to space is access to knowledge, and the next space race will be among companies vying to be a “space company.”