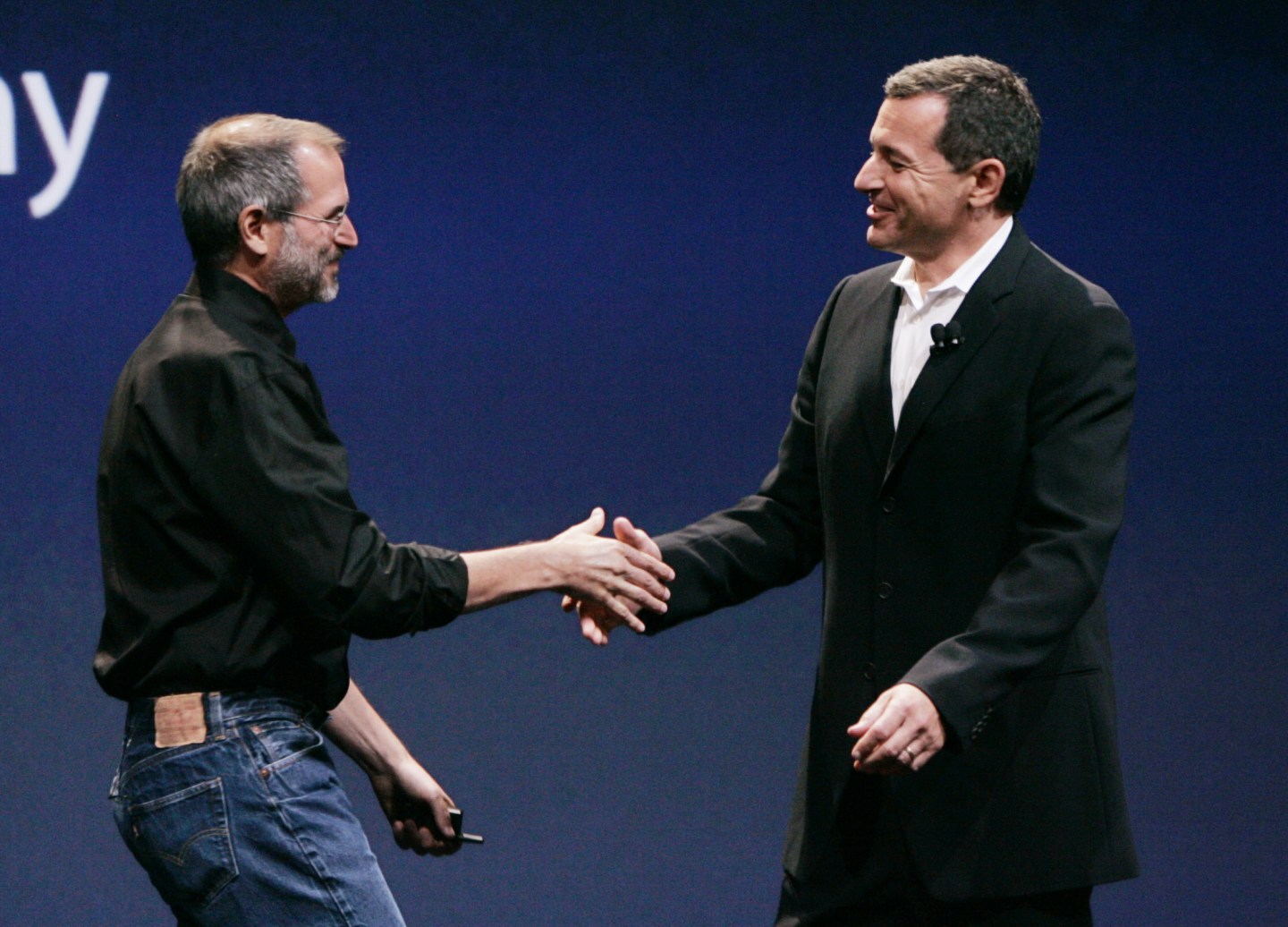 As described in Fortune’s latest cover story, Bob Iger’s relationship with the late Steve Jobs helped shaped the Disney CEO’s technology strategy. The entertainment company was the first to put full-length TV episodes on the iTunes platform, and has been an early adopter of other Apple products, from the iPad to the upcoming Apple Watch, slated to launch in 2015. (A Mickey Mouse version is in the works.) Until his death in 2011, Jobs served on Disney’s board. Before he passed away, he requested that Iger take his place on the Apple board when he was gone—a position Disney’s CEO holds to this day. But the two CEO’s six-year partnership stretched beyond business—they were also friends who consistently bounced ideas off of each other.

In fact, one of Iger’s most prized possessions is a framed photo of him and Jobs shaking hands at the 2005 unveiling of the video iPod, shortly after the two executives hammered out an unprecedented deal to put Disney’s ABC television content on Apple’s iTunes. (Just a few months later, Disney bought Pixar—Jobs’ other company—for $7.4 billion). In the ensuing years, the two sparked a professional and personal relationship, often musing on the intersection of their respective businesses.

“He introduced me to ideas and technologies, and to a constant demand for quality,” Iger tells Fortune.

Iger first met Jobs when he was COO of Disney (coincidentally, Jobs had dated Iger’s wife’s college roommate). On a Saturday afternoon in March, 2005, the board told Iger he was getting the top job. Immediately, before the news became public, he called just a handful of people to share the news: his family, his former boss and Jobs.

“I knew him but I didn’t know him well and the relationship between Disney and Pixar and Michael Eisner [Disney’s former CEO] and Steve Jobs had definitely frayed for a variety of reasons,” recalls Iger. “So one of the things that I thought about as I was nearing the CEO role–or trying to get the CEO role–is would there be anything I could do to salvage the relationship. I was pretty appreciative of what he’d already done at Apple.”

Iger told Jobs that it wasn’t going to be “business as usual” at Disney, that a new era would soon begin (Iger wouldn’t formally take the reigns until October of that year). Jobs, a bit shocked by the call, was receptive to the olive branch, and told him to come up to Cupertino when he could. That’s exactly what Iger did.

Their first order of business, however, was completely unrelated to Pixar. Rather, Iger wanted to talk to Jobs about putting ABC shows on the iTunes platform. “I said [to Jobs] that I think there’s a huge opportunity to do for television what you’ve done for music, which is to put every TV show that’s ever been made on iTunes,” says Iger. “He said that’s a really interesting idea, that he’d been thinking about a similar thing.”
[fortune-brightcove videoid=3958630842001]

The CEOs started engaging in a bilateral discussion—the relationship with Pixar and the idea of moving TV shows onto the iTunes platform. “He ultimately came down [to Disney headquarters in Burbank] with something in his pocket and said, ‘I’m going to show you something that only people at Apple have seen because I trust you.’ It was a video iPod.”

Iger was in. As soon as he became CEO—the first week on the job, in fact—he went to see Jobs. It took less than one week for the two to hammer out the details of a deal.

“That solidified the relationship big time, that we put together a deal within five days and that I was willing to challenge the status quo and take a shot at putting our content on a platform that hadn’t even launched,” says Iger.

The ABC–iTunes deal also led to a better dialogue on the Pixar front. Several months later, in 2006, Disney announced it was buying the smaller animation company for more than $7 billion. The acquisition gave it much more than a handful of successful movie franchises. Disney’s own struggling animation division also got new leadership (Pixar co-founders Ed Catmull and John Lasseter). And, thanks to Pixar’s culture and Jobs’ knack for perfection and details, the company got a much-needed mind shift away from quantity and towards quality.

Following the acquisition, Jobs joined Disney’s board and became the company’s largest shareholder. But the CEOs met outside of board meetings, too.

“He wouldn’t say to me, ‘you’ve got to do something about this,’ but occasionally we would stand in front of a white board and talk about ideas,” says Iger. “And every once in a while he’d come to me thinking the sky’s falling apart and that our business [the entertainment industry] was screwed. And I’d say, ‘tell me how.’ I’d push back a fair amount with him sometimes.”

According to Iger, in some cases Jobs thought things would happen a lot faster than they did, and sometimes even he was surprised that they happened so fast. “The whole app world, that happened much faster and in more profound ways than he ever anticipated,” says Iger. “He never envisioned an app industry.”

Before Jobs passed away in 2011, he requested that Iger join Apple’s board in his place. It was a last—and lasting—indication of the two CEO’s mutual respect and admiration.

Says Iger: “We had a very, very productive relationship—both as friends and business partners.” For much more, see Fortune’s cover story in our January 2015 issue.