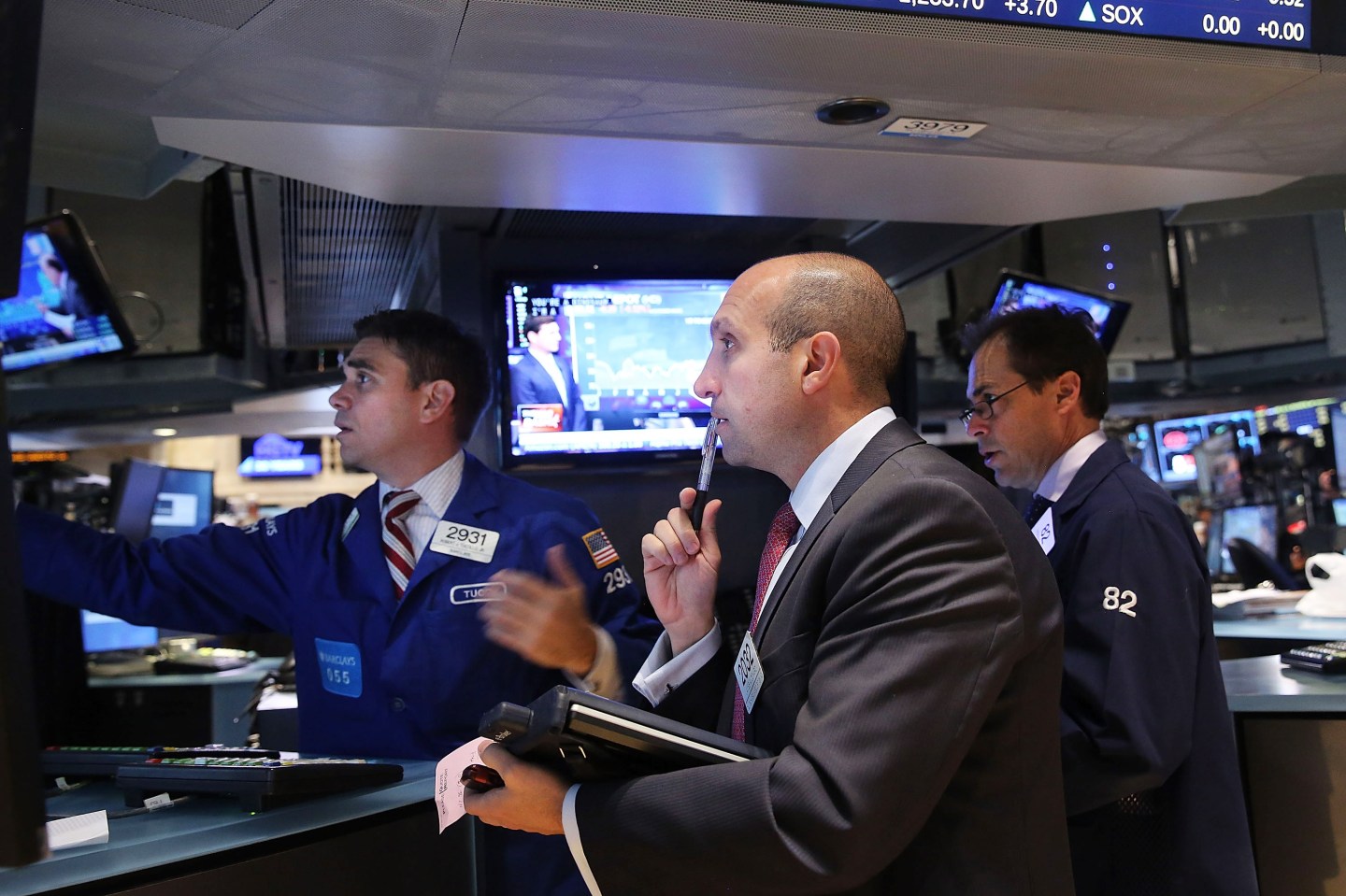 NEW YORK, NY - OCTOBER 14: Traders work on the floor of the New York Stock Exchange (NYSE) during early trading on October 14, 2014 in New York City. In morning trading the Dow was up over 50 points following a drop yesterday of over 200 points as investors grow concerned about the global economy falling back into recession. (Photo by Spencer Platt/Getty Images)
Photo by Spencer Platt — Getty Images

Wednesday was a roller-coaster ride for U.S. stocks with a late-day rebound erasing a fair amount of the losses incurred from multiple dramatic plunges throughout the after after investors showed their concern over global economic growth, falling oil prices, and disappointing data on the U.S. consumer.

The Dow Jones industrial finished the day down more than 173 points, or 1.1%, but the blue-chip index had dipped about 460 points at one point on Wednesday. The Dow Jones’ mid-afternoon plunges had sent the index below the 16,000-point mark just three months after it crossed the 17,000-point mark for the first time ever. The Dow Jones fell abruptly when trading started this morning before to hit an 8-month low before the market in general experienced a series of significant peaks and valleys throughout the day. The index had already fallen by at least 100 points in four of the previous six trading days coming into Wednesday, a rough stretch that has left it more than 6.5% off the record highs that the index reached less than a month ago. The Dow Jones has dropped by 2.6% on the year.

The Nasdaq composite and the S&P 500 index fell 0.3% and 0.8%, respectively, on a day where both indices erased all of their gains for the year before eventually recovering most of those losses. All three indices have experienced several highly volatile weeks of trading recently. The benchmark S&P 500 has lost almost 7% since its Sept. 18 record closing high.

The U.S. dollar also slumped, and safe-haven government debt rallied as investors around the globe resumed their flight from riskier assets. Earlier in the day, a key European market index suffered its biggest one-day slide in nearly three years amid mounting worries about global growth.

Wednesday’s sell-off was spurred by the increasingly bleak economic outlook in Europe, where France suffered its latest credit rating downgrade of the past week, while European markets have also fallen off on concerns over low inflation. France’s CAC index dropped a whopping 3.6% on Wednesday, while London’s FTSE 100 was down 2.8% and Germany’s DAX fell roughly 2.9%.

Meanwhile, in the U.S., the Commerce Department’s report on September retail sales showed that consumer spending dipped more than expected that month. The 0.3% drop in sales came on the heels of August’s 0.6% increase. Jack Kleinhenz, the chief economist for the National Retail Federation, called the sales numbers “surprisingly weak,” despite low inflation and a decline in gasoline prices. Volatility in the marketplace could also be affecting consumer confidence, pushing down spending, Kleinhenz added. “Consumer moods appeared to be embracing the fact that the economic outlook had improved but it bears repeating that the consumer will continue to be impacted by volatility [stock market, ISIS, Russia/Ukraine and Ebola],” he said.

After Wednesday morning’s drop-off, the Chicago Board Options Exchange Volatility Index (VIX), often referred to as the “fear index,” is above 9% on the day and the index has risen more than 60% so far this year.

Brent and U.S. crude futures were little changed, one day after their biggest daily drop in years.