Tech exec or Dr. Feelgood? At Dreamforce, Salesforce CEO has it both ways 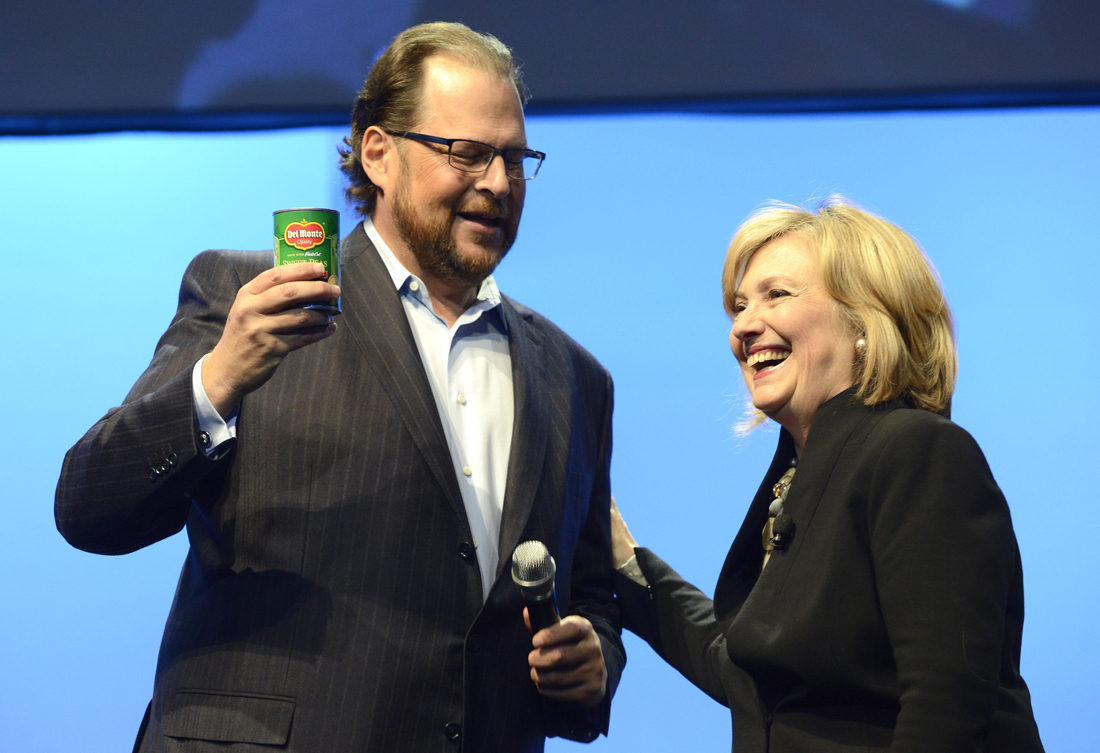 If extraterrestrial beings ever landed in the middle of San Francisco’s Moscone Center during Dreamforce, the larger-than-life annual confab hosted by Salesforce, they’d probably have no idea what the business software company actually does.

Two-thirds of the way into CEO Marc Benioff’s keynote address on Tuesday afternoon, there had been little mention of of the company’s (CRM) products, or anything even remotely related to technology. Instead, the crowd was treated to a performance by the Beach Boys (“Good Vibrations” included), a Hawaiian blessing ceremony, and a lot of talk about philanthropy. (Yes, in the end Benioff did make a new product announcement. More on that in a moment.)

An estimated 135,000 people are attending this year’s conference, and each one of them has been asked to donate canned food to One Million Meals, a campaign to combat hunger. Benioff’s keynote extravaganza, meanwhile, highlighted his cause du jour, the San Francisco Unified School District. And through a concert by the pop star Bruno Mars and the rock band Cake later the same day, he expected to raise about $9 million for the UCSF Benioff Children’s Hospitals.

Hillary Clinton, the former U.S. Secretary of State who spoke at Dreamforce earlier in the day (other headliners include Silicon Valley investor Marc Andreessen, media fixture Arianna Huffington, music artist Neil Young and, of course, music producer Will.i.am), cited Salesforce as a prime example of “doing good while doing well.” Benioff’s Salesforce Foundation has committed to spending $6 million over the next three years on job training for unemployed young adults, part of a Clinton Global Initiative effort that was announced last summer.

Not everyone likes Benioff’s tendency to wax poetic on how much he and the Salesforce Foundation donates to various causes—especially from the Dreamforce stage. Last year, during a nearly three hour-long keynote, the actor Sean Penn, supermodel Petra Nemcova, and Haitian prime minister Laurent Lamothe all spoke about Haiti’s rebuilding efforts after suffering a devastating earthquake. Benioff clearly has an agenda. He is a master showman and salesman, and has been for years. The question is whether his insistence on placing philanthropy front and center at his company’s annual customer conference will impact the actions and cultures of other technology companies.

As one of the largest employers in San Francisco, a city in which income inequality is rising fast, Benioff has an opportunity—some would argue an obligation—to make a positive impact on the lives of less advantaged residents, not to mention get tech workers in and out of Salesforce involved. The flamboyant CEO has encouraged younger entrepreneurs like Box CEO Aaron Levie to make philanthropy a part of their organizations at the onset.

As he does every year at Dreamforce, Benioff took a moment during his keynote to ask members of the audience who work for non-profits to stand up. It’s his favorite part of the annual conference, he said. An enthusiastic round of applause ensued.

Oh, and as for that new product announcement? That would be a cloud-based analytics platform called Wave. But Benioff wasn’t really selling business software on Tuesday—he was selling a feel-good afterglow meant to stay with Dreamforce attendees well after the show ended. Which, as it happens, is exactly what Salesforce’s software promises to do: connect with customers.