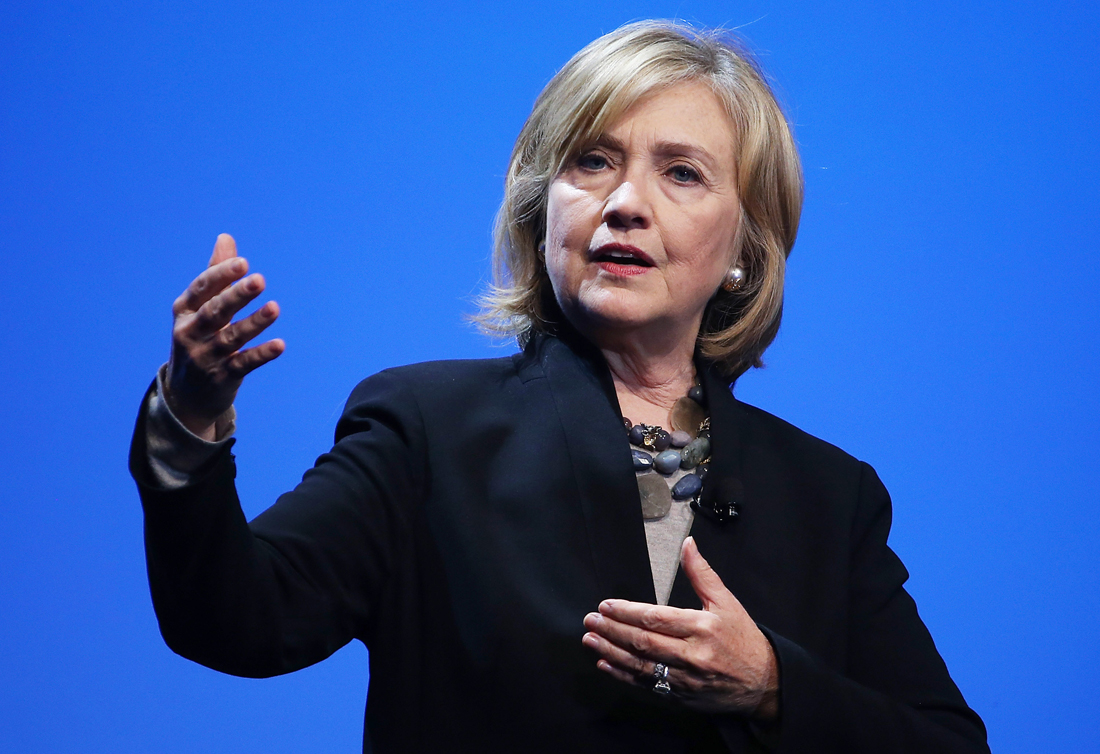 Former Secretary of State Hillary Clinton had a lot to say about the use of technology—both good and bad—at the annual Dreamforce conference in San Francisco, put on by software-as-a-service provider Salesforce (CRM). Clinton, interviewed by World Economic Forum founder Klaus Schwab, took the Dreamforce stage on Tuesday morning (other headliners include investor Marc Andreessen, Arianna Huffington and Neil Young—yes, the musician).

“We have to make sure that the benefits outweigh the pitfalls,” Clinton said of the spreading use of technology.

“Madame Secretary,” as Schwab kept referring to Clinton, gave plenty of examples. She cited the ways in which technological advances have impacted decision-making, imposing a “reactive” effect. Politicians used to have time to take a breath and think, said Clinton, but nowadays they don’t have time, partly because of the demands for immediate decisions and information (she also blamed it on the fact that they spend so much of their time fundraising and the huge amount of “unregulated money” coming into elections today).

“Human beings haven’t changed that much, but the scrutiny and attention in the public eye has changed dramatically,” said Clinton. “We have created very difficult hurdles for people who want to serve to do so.”

Clinton said she was often asked why she racked up so many miles as secretary of state—she visited a record-breaking 112 countries while serving in President Obama’s administration—instead of just using videoconferencing technology.

“Technology has put higher premium on face-to-face,” said Clinton, adding that we need to get back to building relationships—a big theme in her talk.

“Our society is far less racist, sexist and homophobic,” said Clinton. “We are far more tolerant than we used to be. But what we will not do is communicate and build relationships with people who disagree with us politically.”

Clinton complained about the lack of communication in government. Today, politicians don’t get to know their colleagues and don’t play golf with each other, she said, which makes it hard to form coalitions.

Talking to one another isn’t just important in Washington and in the business world, according to Clinton. One of the Clinton Foundation’s initiatives, dubbed with the appropriately cute moniker Too Small To Fail, promotes talking, reading and singing to young children. Clinton applauded Salesforce CEO Marc Benioff’s support of the program, and his other philanthropic efforts, saying the software company is an example of “doing good while doing well.” Benioff’s Salesforce Foundation has also committed to spending $6 million over the next three years on job training for unemployed young adults, part of a Clinton Global Initiative effort which was announced last summer.

Benioff, it should be noted, has been a big supporter of democrats like President Obama and Congresswoman Nancy Pelosi (who spoke at Dreamforce on Monday), though he has said that he is neither a Democrat nor Republican, but rather “an American” who gives money to politicians that he likes.

The largely techie audience at Dreamforce warmly received Clinton, who also talked about the importance of keeping the internet open and accessible, and the opportunity corporations have to make giving back part of their culture from the get-go. Unsurprisingly, she declined to answer the one burning question on everyone’s mind (and which Warren Buffett already called for her): Will she run in the 2016 presidential election?

Her response: “I don’t want to make any news today.”