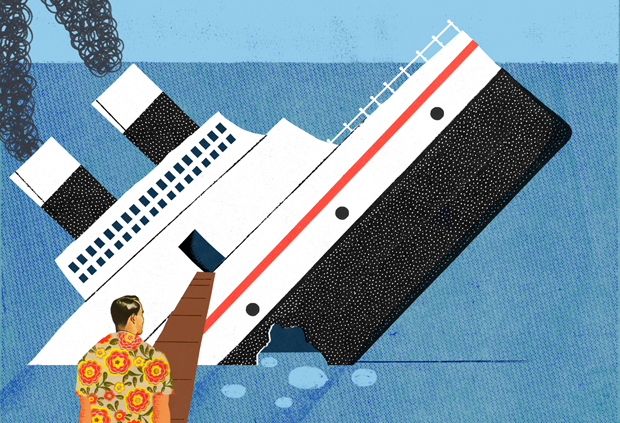 We have now entered the most dangerous phase of any bull market. Call it the momentum trap—the point at which greed begins to overwhelm reason. More than five years after stocks bottomed out during the Great Recession, equities continue to hit new highs. On Aug. 26, the S&P 500 closed above 2000 for the first time in its history. That’s nearly triple where it traded in 2009, and a 40% gain just since the beginning of 2013. The higher stocks rise, the more that cautious investors fret they’ve left money on the table. What if the bulls are right and the market is still on the upswing? Perhaps, as Morgan Stanley posited in a strategy report in early September, we really are in the middle of what could be the longest U.S. expansion ever and the S&P 500 might peak at 3000 around the year 2020. Is there still time to go all-in?

Don’t get seduced by the hype. The continued gains haven’t changed the basic facts—except to make the market math even more alarming. It’s a warning this writer has sounded before (see “The Party Could Be Over for Stocks“), only to watch stocks continue to defy gravity. Valuations have now risen to what could well be dangerously inflated levels. At these prices only two outcomes are possible: Valuations will remain elevated, and stocks will generate returns far below the historical averages for years to come. (Think of a high-priced bond with a low yield.) Or valuations will return to normal levels, as they always have in the past, and investors will be saddled with steep losses. The second scenario is far more likely, and it should make anyone cautious about plunging aggressively into stocks right now.

To understand why today’s market is so risky, it’s important to expose a flaw in the bulls’ case. Their theory is that today’s extraordinarily low interest rates both justify today’s high equity prices and make stocks a great deal. Extra-high price/earnings ratios don’t really matter, argue the bulls. What does matter is that stocks look fabulous compared with the other main investment option: bonds. That’s because the “yield” on stocks is far higher than the yield on bonds—meaning that equities are, in theory, bound to deliver far better returns. When stock yields beat bond yields, stocks are supposed to be cheap.

“Investors are now paying a very high P/E for the stock market, and that’s a bad sign for their returns over the long term.”
—Cliff Asness, AQR Capital

The yield on stocks is determined by inverting the traditional P/E to get an earnings/price ratio, or E/P. And the best P/E to use for this calculation is the one developed by Robert Shiller, the 2013 Nobel laureate in economics. Called the CAPE, or cyclically adjusted price/earnings ratio, Shiller’s P/E ratio smooths the spikes and valleys in profits by taking a 10-year average of inflation-adjusted earnings, reflecting companies’ real, long-term earnings power. Right now the CAPE stands at a lofty 25.7, far above its three-decade average of 19. Inverting the CAPE, the current E/P is around 4%. So investors can expect to pocket that 4% in dividends and capital gains, plus inflation, in the future. That adds up to a return of around 6% to 6.5% per year. It’s not great compared with the 10%-plus annual gains over the past half-century. But it appears favorable compared with the yield on 10-year Treasuries, now at 2.5%.

The risk in this analysis is that it assumes that interest rates will remain far below average for an extremely long period—an unlikely scenario. “That view is basically a ‘this time it’s different concept,’” says Chris Brightman, chief investment officer of Research Affiliates, a firm that oversees investment strategies for $169 billion in funds. “The danger is that the Fed tightens, rates rise, and, as usually happens when rates rise, P/Es fall sharply.” In fact, rates have never remained at today’s levels for a multiyear period since the mid-1950s.

Steady Slide Since peaking in 1981, interest rates have been in a long decline. they're now historically low.Graphic Source: Robert J. Shiller

What would be the damage if rates do jump? Both market math and history tell us that a big rise in rates leads to a dramatic increase in the earnings yield—and, as a result, a severe contraction in P/Es. Let’s say things go back to normal and the 10-year Treasury yield goes from 2.5% to around 4%, the average in the mid-2000s, while inflation stays about the same as it is now. It would be reasonable to expect that the Shiller P/E would drop from 25 to about 18, causing stock prices to drop about 30%. By contrast, the price of the 10-year Treasury would be expected to fall much less, around 13%.

A 2003 study by Cliff Asness makes a compelling case for caution. Asness, co-founder of asset-management firm AQR Capital, which oversees some $113 billion, examined 10-year Treasury rates at the end of every month from 1965 to 2001 and sorted the hundreds of samples into five categories, running from the lowest to the highest starting interest rates. Then he calculated the S&P 500 returns for each month 10 years later. The results are sobering. In months that start with rates in the lowest quintile, similar to today’s situation, the S&P posted a –2% annual return, excluding inflation, over the next decade. When investors bought stocks with rates at their highest, they pocketed real gains of more than 10% per year. The market mechanics keep repeating: Falling rates inflate P/Es, while rising rates puncture rich valuations. “Investors are now paying a very high P/E for the stock market, and that’s usually a bad sign for their returns over the long term,” says Asness.

What we don’t know is when rates will begin to rise. The catalyst could be the end of the Fed’s stimulus program or a sudden surge in GDP growth. But the evidence clearly shows that the worst time to buy stocks is when rates are already at extreme lows. That’s now. Stock buyers beware.