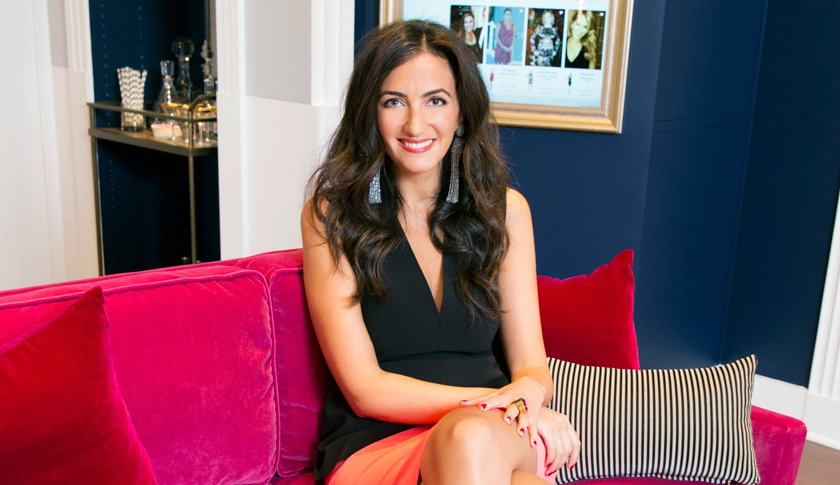 Jennifer Hyman considers herself an amateur sociologist. She grew up in the suburbs of New York City and found herself driven by community issues. When she left for college at Harvard University, she turned her passion into a social studies major. After a few years working for Starwood Hotels and Resorts, WeddingChannel, and the media and entertainment giant IMG, Hyman returned to Harvard for an MBA. On semester’s break, she had an idea: why not democratize the luxury industry for women? She shared the idea with a friend, Jennifer Fleiss, and Rent the Runway was born.

The young New York company has made its name on allowing regular women to rent luxury items such as special occasion dresses, accessories, and outwear. As it has grown, Hyman has come to think of the business less a peddler of sparkly dresses than a massive logistics operation. At this year’s Fortune Brainstorm Tech conference, Hyman announced “Unlimited,” a monthly subscription service for luxe everyday wear with a Netflix-style queue that will undoubtedly test RTR’s logistics prowess. The company currently has 4 million members and 250 designer brands.

I’m really excited about educational technology and all of the strides that have been made to use technology to make more dynamic, interactive curriculums that are personalized to the user. We all have diverse ways of learning and we should teach in a way that’s best suited to the student. For example, I’m obsessed with music. I’m an auditory learner, and if you put something into a song, I’ll remember it forever. I can see that the way people derive self-confidence is connected to how well they do in school, and if they’re good at sports or drama, that brings a huge amount of pride to them, but we tend to teach in a very didactic way. So I love companies like Codecademy, Coursera, and Amplify, which are disrupting the game in terms of how we learn.

Be humble, be curious, and listen to the people who have come before you. I’ve found that entrepreneurship only gets harder every year and as your team gets bigger, the stakes get higher. The amount you personally invest of your emotional energy and sanity gets a lot higher.

I’ve often re-read some of my earlier interviews or speeches and those of my peers in the entrepreneurial community, and all of us had a little too much intellectual arrogance. I now have a million times more respect for entrepreneurs than I had four or five years ago. I think about people like Jeff Bezos or Reed Hastings, and I really marvel at the stamina they’ve had to keep on trucking no matter what happens.

Implementing a business idea is easy, but the emotional rollercoaster of building a team and building a culture is incredibly exhausting both in positive and negative ways. You need to continue to listen to others, be humble, and realize that you’re just at the beginning right now, and it’s all about continuous learning.

At my first job out of college, when I was 22, I had an experience that changed my whole career path. In college, where we are encouraged to express our opinions and speak out, I was suddenly thrust into a work environment with office politics, and where it was considered inappropriate for women to be vocal and confident in meetings. After one meeting, an older woman pulled me aside and told me basically to “shut up” and that even though my ideas were really smart, I was coming across as too bossy for a girl, and recommended I be sweeter and more flirtatious in meetings.

Given that this advice was coming from a woman I respected, it was even harsher to hear it, and I started crying in the office. Jim Barra, an SVP at the time, took me into his office, and I recounted the experience. What he said inspired me and pushed me to be an entrepreneur. Jim told me to continue to be myself and to be confident. He said to evaluate who was the one giving me feedback, and whether they are someone I should listen to; not everyone who is older than you or more experienced is worth listening to.

If I had listened to that woman, my career would have taken me in a totally different direction. I would never have been an entrepreneur today or be in a situation where I’d be comfortable expressing my ideas. Sometimes you have to have confidence in your own manner and go for it. I think that his belief in me is what set me off on a journey to do amazing things with my career.

This is in no specific order, because I have a lot of projects on my list. I would like to inspire more women to become entrepreneurs. I want to have an Eat, Pray, Love experience where I drop off the face of the planet and move to Greece. And then my big project, after Rent the Runway, is to start an urban commune, which will be a community in the West Village in New York where I can live among my best friends and family.

We’re the first generation that’s lived without community. Think about our grandparents’ generation and how they lived in neighborhoods and our parents who had community by the nature that everyone did everything at the same time. Now everyone’s on their own path, and people who you love have moved all over the world. Even in a city like New York, where it’s easy to get around, you can live 10 blocks from someone and not see them very often, especially as you have kids and high pressure careers. The idea that we should be around the people we love and form an incredible community together where we share our lives is a new way to think about urban planning.

I think that one of the challenges is that a lot of the world, especially the tech community, thinks that we’re in the business of renting frilly dresses as opposed to the business of disrupting an industry and building out one of the most sophisticated technology companies in the United States. I think the tech and business community has a stereotype that because we are young women who happen to like wearing dresses, that we started the company because we love shopping or because we are obsessed with fashion. We saw a movement toward collaborative consumption across all sectors of the economy and we started Rent the Runway because we want to change and democratize one of the biggest industries in the world.

If you could have done anything differently in your career, what would it have been?

I would have started my career later. I would have taken a few years off after college to travel the world, with no agenda, and learn different languages. I think that once you hop on the career train, it’s hard to hop off of it.

In the U.S., there’s too much pressure to be on a track your whole life. It’s stifling in terms of people’s creativity. Many of my classmates have pursued careers that they aren’t passionate about because those are the companies that came to recruit when they were 21 years old. Taking the time to figure out who you are as a young adult and to have fun helps you find your creativity and what you’re passionate about. To me, those things come from outside of the office when I’m relaxing and having fun.

I learned how to be a kind, social butterfly. I believe that everything good in life stems from friendship, and all of the best things that happened to me in college were related to things that were social. There were friends who inspired me, and those friends connected me later in life to other friends or business opportunities. I’ve learned that so much of life is about learning from the people around you instead of the subject matter itself. That kind of social quality and the love of being around people and being inspired by them and listening to them, going into my career in particular, has been the most important thing that I learned.

I would like to perform in a band in front of all my friends and family. I sing, and I believe I deserve a Beyoncé moment. Everyone deserves one.

It’s one from B.J. Novak called One More Thing: Stories and other Stories. It’s the most hilarious, brilliant book that I’ve read in years. I love laughing out loud, and that’s what that book does over and over. Every night I have a ritual before I go to sleep where I read for at least half an hour because it’s the only thing that will help me get my mind off of Rent the Runway. I’ve probably read 75 books over the last year, and this was definitely the most entertaining one.

What is one unique or quirky habit that you have?

I have Italian food five nights a week. I probably eat more spaghetti bolognese than anyone on the planet. Before I make any important decision, I have a mental block unless I’m eating pasta. It’s almost like Popeye with spinach. I don’t have anything in my fridge except tomato sauce. It seems quirky given that everyone else is particularly health conscious.