The ‘tripledemic’ is sickening kids across America and straining hospitals, as a gift shop turns into a triage room and a hospital exec helps out in the ER 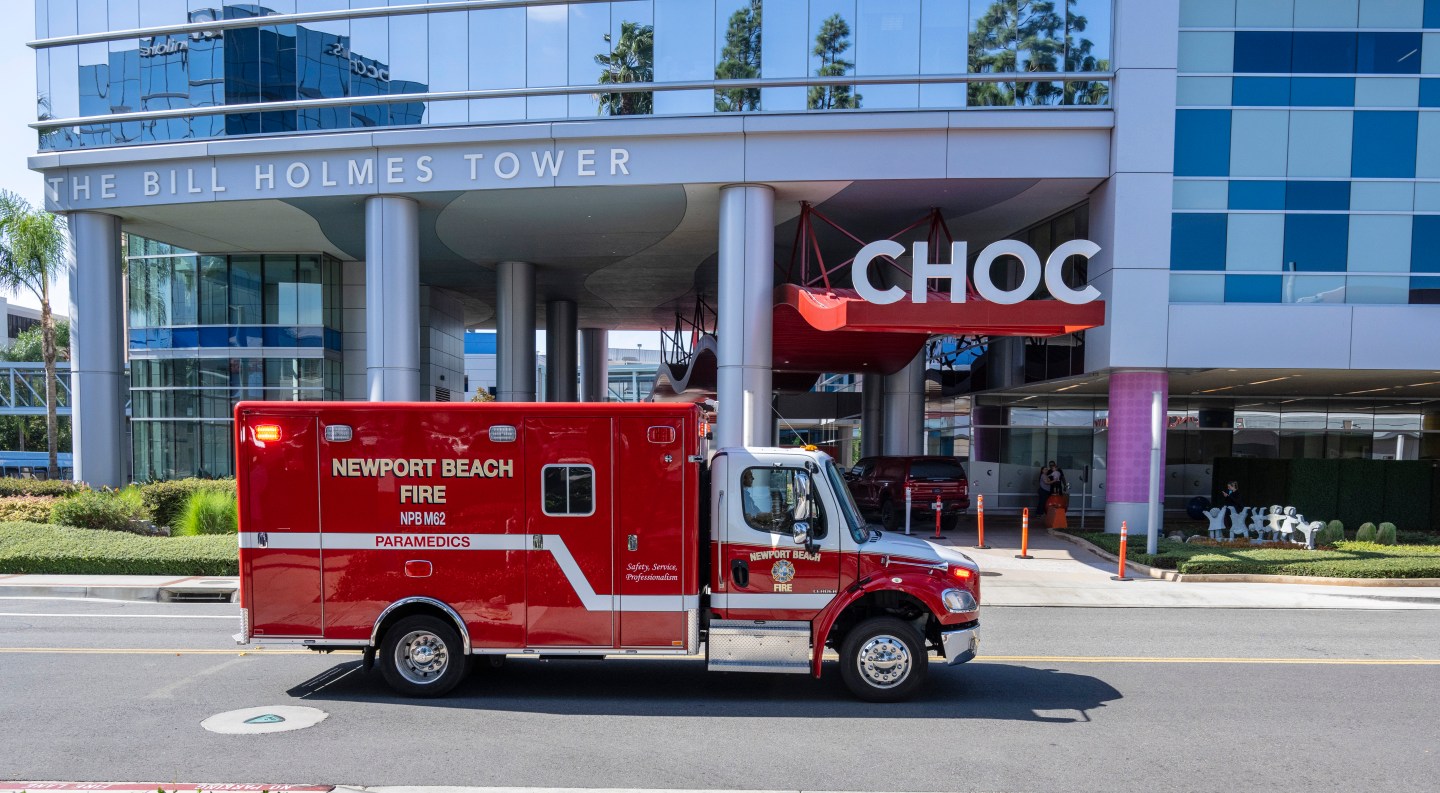 A Newport Beach Fire ambulance makes its way to the entrance at Children's Health of Orange County on Nov. 1. Orange County's health officer has declared a local health emergency in response to increases in respiratory illnesses and an onslaught of the quickly spreading RSV, a respiratory virus that is most dangerous in young children.
Mark Rightmire—MediaNews Group/Orange County Register via Getty Images

A so-called “tripledemic” of flu, RSV, and COVID is pushing North American children’s hospitals to their limits this fall. Some are so desperate for additional space and staff that they’re considering setting up “surge tents” in parking lots and requesting help from the National Guard.

Rady Children’s Hospital–San Diego isn’t quite there—yet. But the hospital may need to implement such a plan in the near future, Dr. Nicholas Holmes, a pediatric urologist and the hospitals’ senior vice president and chief operating officer, told Fortune.

For now, it’s using creative measures to deal with a record surge of patients. The hospital has temporarily turned its gift shop, located near the emergency department, into a patient triage room. Play areas have been transformed into patient care areas. And an old neonatal intensive care unit that still has hookups for oxygen administration has been repurposed.

Leadership and administrative staff like Holmes, who are licensed health care professionals but not practicing, have begun working shifts in the emergency department to free up weary nurses.

“I can still pass out blankets and give popsicles to kids,” Holmes told Fortune. “It allows nurses to do what they need to be able to do—nursing.”

Rady Children’s isn’t alone. A surge in respiratory illnesses—including influenza-like illnesses like rhinovirus and enterovirus—pushed nearby Orange County to its limit last week. The jurisdiction declared a public health emergency, which allowed it to request aid from nearby counties, in addition to state and federal assistance.

One children’s hospital there, Children’s Hospital of Orange County, told Fortune last week that it was using all available space, and had activated a command center to manage the patient load.

On the East Coast, “almost every single major” pediatric hospital is full, Dr. Anita Patel, a critical care doctor at Children’s National hospital in Washington, D.C., told Fortune last week. Her hospital has been operating close to capacity for over a month.

To cope with the increased patient load, the hospital formed an additional team of high-level ICU doctors to care for children who need admission, but who must stay in the ER until beds open up, she said.

Dr. Jason Kane, associate medical director of the pediatric ICU at the University of Chicago Medicine Comer Children’s Hospital, told Fortune that his facility was full over the past 24 hours. It managed to admit 30 children from other hospitals’ emergency departments that needed beds, but still had to turn away 60.

Chicago has the “luxury” of having other children’s hospitals in the city, but many areas aren’t so lucky. Case in point: Recent transfers to Comer Children’s have come from as far away as Iowa, Missouri, Wisconsin, Indiana, and Kentucky, he said.

“I just finished a week in the ICU. I’ve never seen anything like this, and I’ve been doing this for about 22 years.”

What’s behind the U.S. pediatric care crisis, sweeping as far north as Canada?

Flu season began early this year in North America. In Australia, which was hit hard by Influenza A earlier this year, children were especially impacted—a pattern playing out in the Northern Hemisphere as well. Compounding things, pediatric hospitals are seeing epidemic levels of RSV, or respiratory syncytial virus infection. And the U.S. is still in the middle of a COVID pandemic, or epidemic, depending on your views.

“Normally in pediatric health care, the viral season starts in late November and extends to March,” Holmes told Fortune. “This year it started in late summer and has peaked within the last couple of weeks. In four to six weeks the flu will come on top of that and push volumes even higher.”

But there are issues behind the pediatric hospital capacity crisis that have nothing to do with circulating viruses, according to Kane. The birth rate is down in the U.S., meaning fewer children are filling pediatric hospital beds. Some hospitals have recently closed or cut their pediatric programs because they weren’t “fiscally viable.”

Adult hospitals are quick to ship kids off to children’s hospitals because their staff lacks experience in caring for them. But the U.S. pediatric health care system doesn’t always have the bandwidth. Children’s intensive care beds make up less than 1% of staffed beds in community hospitals this year, according to the American Hospital Association.

Kane thinks back to COVID’s first year, when adult hospitals were overwhelmed. “Many children’s hospitals gave up beds to put adults in them,” he recalled.

“Now, two and a half years later when the pediatric system is overwhelmed—and I’m speaking about the whole country—there isn’t a willingness for adult beds to be sacrificed to put children in them.”

Adult hospitals are struggling this fall too. The U.S. is experiencing higher flu hospitalizations than it has in more than a decade, federal health officials said Friday. They outlined plans to deploy troops and FEMA personnel, and supplies like ventilators, if needed, in response to a surge in respiratory illnesses among all age groups.

However the nation’s health care system arrived at this point, the emotional burden on the community of pediatric health care providers is profound, Kane says.

“My general pediatrician friends have offices that are overwhelmed with kids coming in, but they need to be seen. So many things are going on right now that are causing moral distress to the entire pediatric community.”