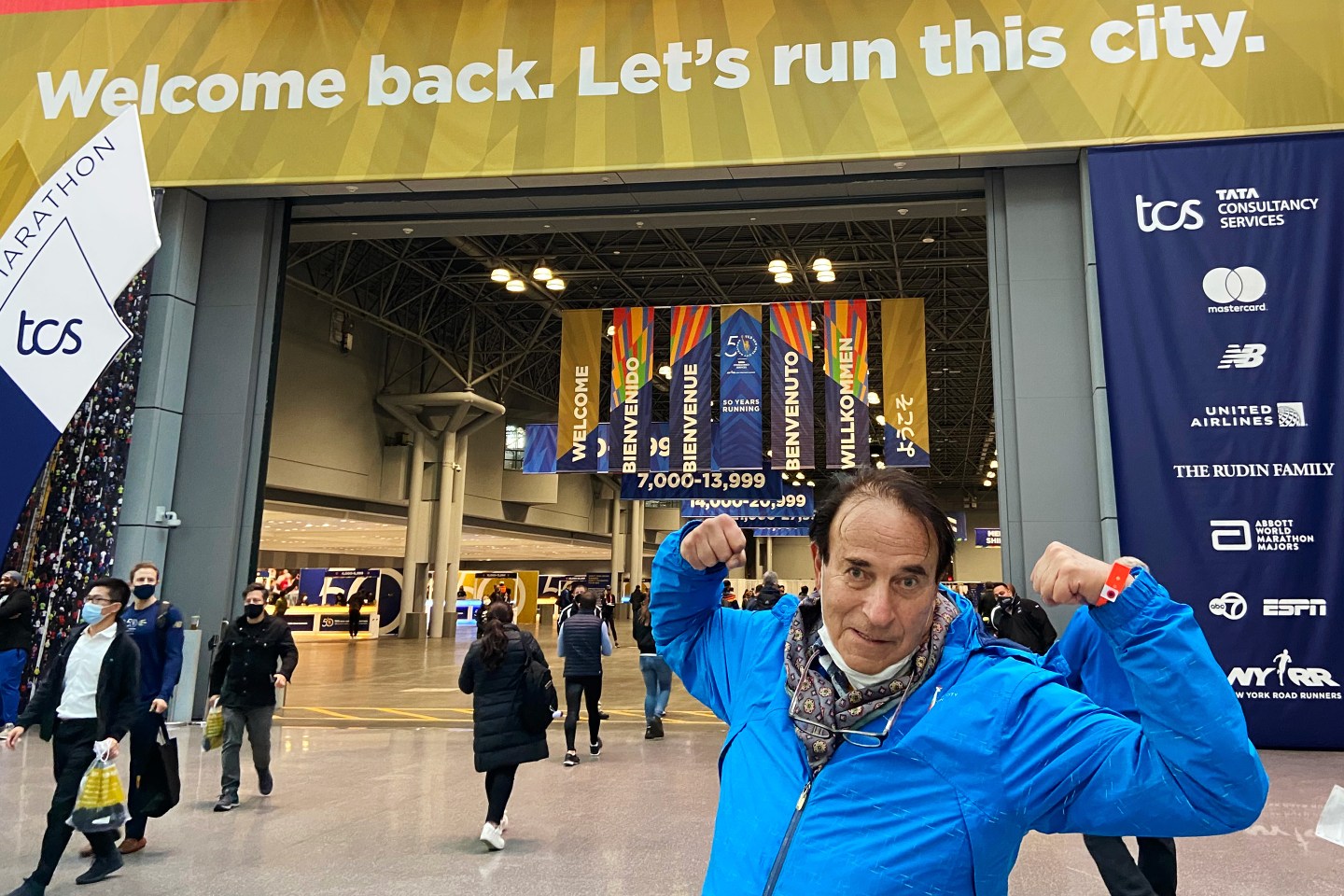 “It always shocks me when I finish. I can’t believe it."
Stephen Wertheimer

Eighty-four-year-old Stephen Wertheimer has never raced against the clock. It may be the reason he was the oldest finisher at last year’s New York City marathon, and is now onto his 60th marathon Sunday—which would make it his 39th New York City marathon. A natural observer, Wertheimer loves the outdoor landscape of his personal jogs along the shore in California where he lives now, and enjoys every bit of a race so he can see a new city. He’s traveled across the country and outside of the U.S. to see the sights while raking in 26.2 miles each time. It hasn’t gotten old.

“I’ve got an appreciation of nature I’ve never had as a young man,” Wertheimer tells Fortune. “It’s like a big canvas of art out there, and it’s better than walking through a museum.”

Wertheimer, a father of six and grandfather of 11, is running Sunday along with his daughter Erin, who he describes as much speedier than him and a true athlete. When she crosses the line, she plans to go back to her hotel, shower and then come cheer her dad on for his finish—their marathon tradition. Running has been a way to connect to his children, three of whom also run marathons, with the New York City marathon being especially meaningful for him so he can spend some quality time with Erin who lives in Denver and travels for the race, too. It’s never been about the finish time—in fact, Wertheimer doesn’t have a secret sauce to how he makes it across the line time and time again.

“It always shocks me when I finish. I can’t believe it,” he says, who recalls the brutal mile 16 in New York where he usually tells himself he won’t be able to finish. He just has to “reconvince himself” that he’ll make it the last leg, he laughs.

Wertheimer was not a natural born athlete, he admits, describing himself as “absolutely uncoordinated,” and says the only exercise he got as a kid was turning pages of a book.

It was when he got drafted into the Navy and had to run and swim a mile in the School of Aerospace Medicine in Pensacola, Florida that gave him a boost of confidence. And in 1967, when he served in Vietnam for two years as a flight surgeon on the USS Hornet, an aircraft carrier, it was a matter of life or death. Being alerted that you had a “general quarters” position meant the ship was in trouble. At 2 a.m. one night, Wertheimer got the alert, but his position resided four flights of ladders from where he lived, and he had only two minutes to get in place.

“I start running towards my general quarter station, which was a football field away,” he says. “I really ran.”

He made it just in the nick of time, but felt completely out of shape, as a heavy smoker at the time, and not having exercised on the ship at all. He even coughed up blood, something he says deeply frightened him.

“I decided that I’m going to have to do something if I’m going to live until old age,” he says, adding he didn’t want to “die early.” After he returned home, he began cycling and then jogging, which helped him battle the stress and diligence needed as an orthopedic surgeon—he’s still practicing medicine today.

In 1978, he ran his first marathon in New York City. His impetus was to feel active and healthy, but it soon became something he leaned on for comfort, especially as a way to slow down mentally.

Wertheimer started running with Erin when she was 13 and his wife got sick. It ended up becoming a calming ritual for them over the years. His wife passed away two years ago, and in that time, he’s listened to 117 audio novels during his jogs. Running has saved him in many ways.

“I can observe nature, enjoy myself outside, and also listen to a good book and run, and when I finish, feel good,” he says. “It’s one of the nicest things I’ve done for myself.”

Combatting burnout and stress and getting a chance to use marathons as a way to see the world and travel has kept Wertheimer going over the years. The way to stick with something–anything—is to find something you love. And Wertheimer has made marathons his vacations. He plans to take three days off of his work as a doctor when he completes the race and heads back to California, a reward he has always given himself, before getting back to his routine outdoors for a slow, enjoyable scenic jog again.

“You don’t have to jog fast. You can jog any speed. It could be a walk. It’s whatever it is that makes you feel good … just do it so long as it continues to be enjoyable,” he says, and in official marathons, he even takes some pit stops. “I’ll actually stop for a cup of coffee because I don’t care about the time.”